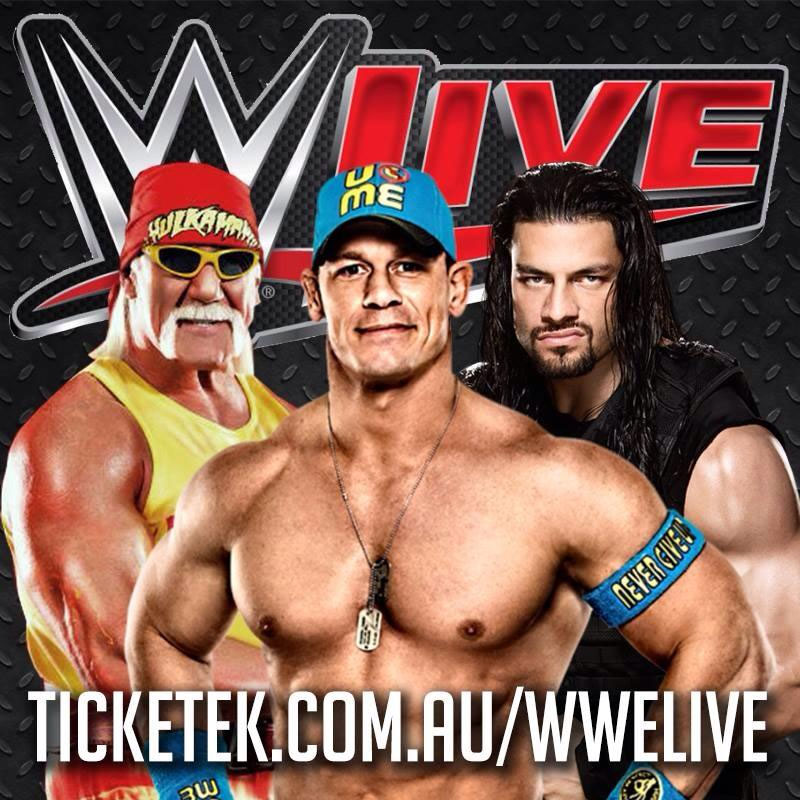 When the WWE began selling tickets for their 2015 tour of Australia, its headline act was wrestling legend Hulk Hogan as the General Manager and an opportunity to see the company’s two top babyfaces John Cena and Roman Reigns wrestle.  When it came to the week of the event, none of the three performers would make the show.  If there was ever a tour where the WWE would need to dig deep and rely on the ol’ ‘card subject to change’ clause, this was it.

About a month before the event Roman Reigns was pulled.  He received a minor injury from which he would recover in time for the company’s second biggest show of the year Summerslam but he was effectively put on ice and pulled from international tours.

Then two weeks prior to the show, Hulk Hogan was sensationally fired by the WWE for alleged racist remarks he said on a sex tape filmed by a radio DJ eight years ago while Hogan was having intercourse with the DJ’s wife.

Lastly, three days before the show, John Cena broke his nose when on the receiving end of a flying knee from World Heavyweight Champion Seth Rollins. 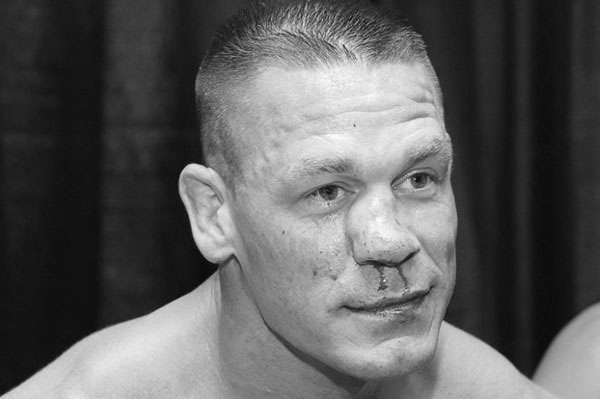 Don’t try this at home!

It meant that whatever the company had planned as their original card was effectively tossed out the window and a modified roster was hastily thrown together at the last minute.  As is so often the case with these things, when the company is having to do some last minute scrambling, good things can happen.

In this case, Brisbane was treated to one of the best house show cards that the city has seen in years.

Natalya & Emma vs The Bella Twins

This was a show where three matches on the card – Balor/Neville, Cesaro/Owens and Rollins/Ambrose – pitted some of the industry’s most talented workers in their prime against one another.  In my experience, I’ve often found that WWE house shows in Australia typically have pretty weak cards with not many match ups that are likely to produce competitive matches of the calibre you would see on PPV.  This show gave us three of them!  And to be fair to the rest of the card, I thought they put on a great show.  Wrestling legend Mick Foley once referred to wrestling as being like a variety show which should have something for everyone – a comedy act, a strongman routine, acrobatics etc.  This was a well rounded show that had something for everyone. 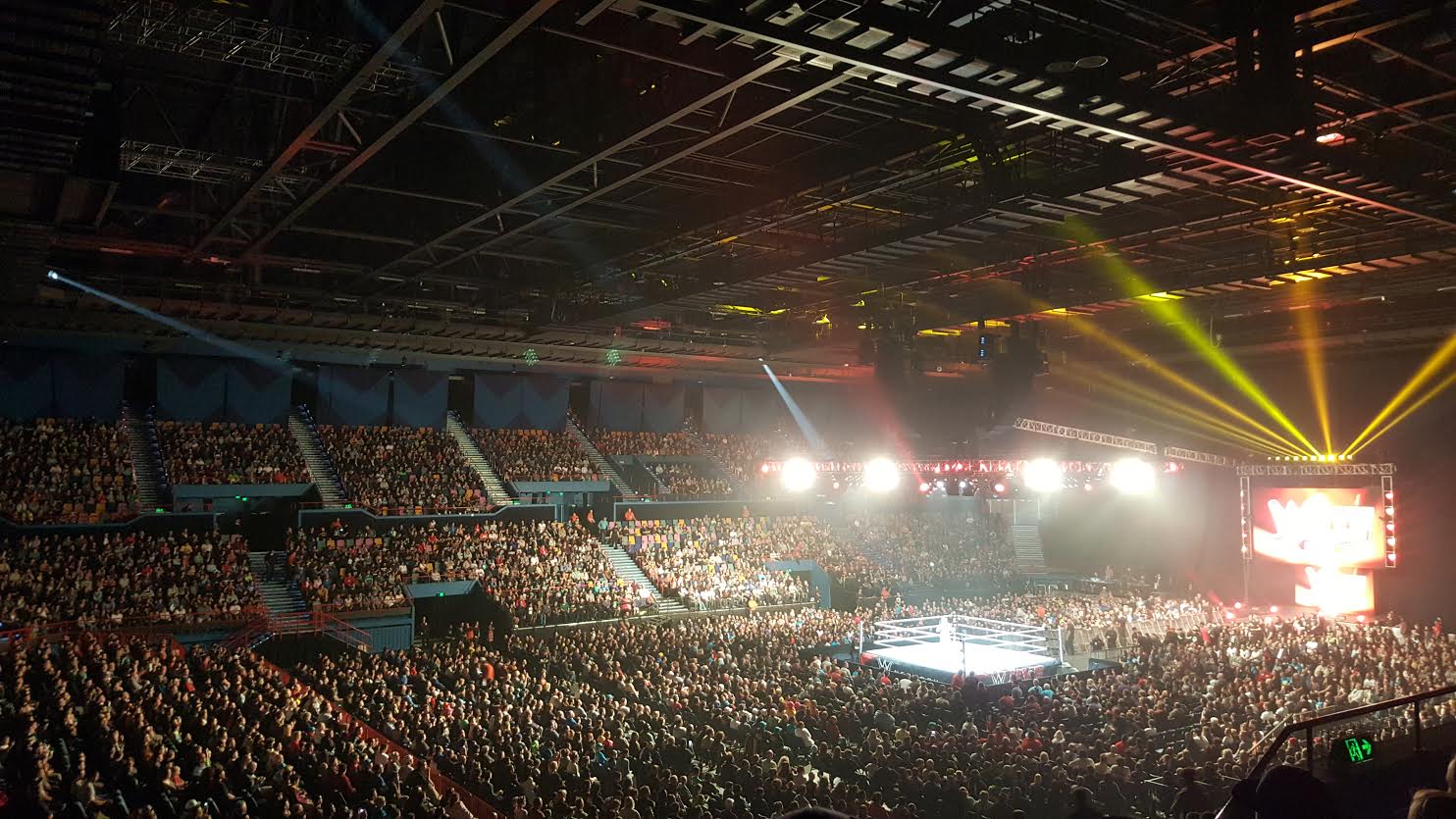 Here’s a quick recap of the night.

The show began with WWE announcer JoJo introducing Shawn Michaels.  Michaels today is positively ancient and he doesn’t so much as strut down to the ring as he does hobble.  But the man still has lightning charisma and was a fantastic replacement for Hulk Hogan.  Incidentally, there was no mention of Hogan whatsoever but the late withdrawal of John Cena apparently entitled anyone in the arena to claim a refund at the box office.

I’m guessing Michaels doesn’t watch the current product as he seems to have no idea who the babyfaces and heels are on the roster.  He talks briefly about Triple H and the mention of Hunter’s name draws boos from the crowd.  ‘Oh, you guys don’t like him these days?’ says Shawn sounding surprised.

He jokes with the crowd about how he’s been practising how to pronounce our city’s name.  American wrestlers always come to Australia and talk about what a fine city BrisBAIN and MelBORN are.  “Why not just spell your city BriBIN if thats how you want to say it?” asks Shawn.

Finn Balor and Adrian Neville are easily two of the WWE’s finest workers and it was a huge surprise to seem them booked in a match against one another.  Originally, we were supposed to get Finn Balor against Bo Dallas.  As expected, this was an excellent match and happily, they were given fifteen minutes to really shine.  They started with some mat wrestling before finishing the match with an exchange of high flying moves including Neville’s Red Arrow and Balor’s Coup De Grace.  Balor picked up the win when he hit his finisher a second time.  This was a classy match and a very pleasant surprise to start the show.  I really hope for big things in the future of both these guys.

This was the comedy jobber match of the evening.  It helps that both guys have super catchy ring entrance music that the crowd responded warmly too.  In fact, I thought the crowd in general was really great and were vocal throughout the show.  Rose did a great job riling up the crowd by playing up some cowardly heel antics.  Fandango eventually got the win.  I felt he was extra appreciative of the reception that he got as he seemed to linger in the ring for an extra moment to soak in the crowd response.  It’s moments like that that make me wonder if most of the company’s midcarders who barely get time on the televised shows almost prefer working house shows as it gives them a chance to shine.

I didn’t really expect anything from this match to be honest but for the fact that both guys seemed to be having a lot of fun interacting with the raucous Brisbane crowd. I find R-Truth’s routine to be pretty cheesy but I couldn’t stop laughing (and neither could Harper) when he somehow managed to get ‘Whoomp!  There it is!’ over as a chant with the crowd.  It was like watching a Men On A Mission match from 1995.  Harper was basically channelling Warlord and when he was on the offensive, he would constantly stop to flex his biceps.  Harper eventually went over with a lariat. 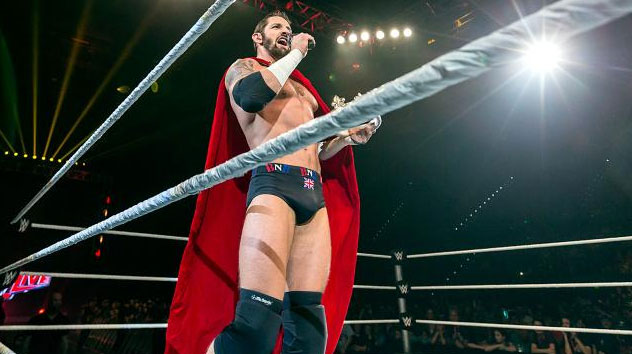 There was a golden opportunity missed by King Barrett in this match.  As he was about to enter the ring, the Australian cricket team was getting dismantled by Stuart Broad and getting bowled out for 60.  He could’ve got incredible heat had he come out and given the audience the bad news.  He would eventually do so a few nights later in Sydney wielding a cricket bat in the ring.

Regardless, he was still able to draw the biggest heat of the night when he came out and berated Australia as a second rate colony of the British Empire.  Better still, as Barrett was shit-talking our city, he tripped and stumbled on some metalwork jutting out from the ring entrance which drew plenty of cheers and laughter.

After all the verbal sparring, the crowd went absolutely nuclear for Randy Orton who seems to have found a new lease of popularity after the RKOFROMOUTTANOWHERE!!! vines (superimposed videos of Orton hitting his trademark finishing move on everyday people) went viral last year.  Randy picked up the win after hitting his signature move – from out of nowhere of course – and sent the crowd into the intermission absolutely buzzing.

Natalya & Emma vs The Bella Twins

The “We want Emma” chants tonight made me feel very much at home! Thank you #WWEBrisbane! #WWE #RealEMMA #EMMAlution pic.twitter.com/rjD3iFz8YP

I had mixed feelings about this match.  It was awesome to get a chance to see Emma wrestle in front of her home town crowd but given the amazing new crop of wrestlers in the WWE’s womens division, it was a bit of a shame that we didn’t get a chance to see any of the Four Horsewomen of Wrestling – Bayley, Charlotte, Sasha Banks and Becky Lynch.  The match itself was passable but who cares, basically this was just a nice opportunity for the crowd to show their appreciation for an Australian wrestler who’s hit the big time.  The finisher should’ve been Natalya locking in a sharpshooter on one Bella twin while Emma had the other in an Emma Lock.  Instead the match finished with a roll up.

Winners by pinfall – Emma and Natalya

This match was another highlight of the evening with two supremely talented and popular wrestlers that I used to watch in Ring Of Honor ten years ago getting the chance to shine on the international stage.  I think the general consensus with fans is that both wrestlers are top tier talent that deserve a higher platform than what the company seems willing to give them.  Hopefully their time will come.

This match was presumably a nice warm up for their encounter at Summerslam.  Owens antagonized the crowd nicely by playing spoiler tactics.  He rolled out of the ring several times to catch a breather and after running the ropes several times teasing a big manoveur, he dropped to one knee and applied a chinlock, drawing boos from an incensed crowd.  Top work, Mr Owens.

If there was one disappointment I had with this match, it was the abrupt finish.  Cesaro locked in a sharpshooter on Owens to which he tapped immediately.  It came out of nowhere and I don’t think anyone expected it to be the finish.  In retrospect, I think its because they were running well behind schedule.  The show was supposed to wrap up at 10.30 and was basically half an hour late. 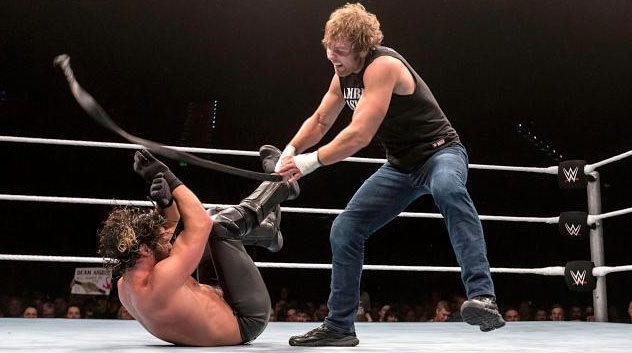 Seth Rollins and Dean Ambrose are two basically two of the long term main eventers of the WWE and in the absence of John Cena, these two were worthy replacements for a main event act.  They wrestled in a ‘Brisbane Street Fight’ which disappointingly didn’t include hitting each other with cases of XXXX beer or strangling your opponent with a Brisbane Broncoes jersey.

Rollins and Ambrose put on an entertaining brawl that included Rollins getting on the mic mid-match to antagonize the crowd, a table bump, some brawling in the crowd and a finish straight out of King of the Ring 1993 – Rollins picked up the pin after appearing to throw salt/white powder in Ambrose’s eyes.  I’m guessing Mr Fuji must have slipped that to him at ringside.

It capped off a great night at the Entertainment Centre.  Good work WWE.  It was the first house show I’d seen in Brisbane in nearly ten years and it didn’t disappoint!

Previous: Lawrence of Arabia [1962]
Next: An Evening With Neil deGrasse Tyson