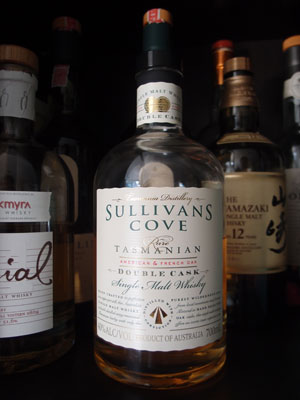 NOTES Sullivans Cove came into international renown this year when their French Oak Cask was recognized by Whisky Magazine as being the Best In The World.  I haven’t had the opportunity to try that particular drop but I have been nursing a Double Cask in my collection.  It’s not the best whisky in the world.  It’s not even the best whisky in my cabinet.  But it is still a lovely dram and its great to see Australian whisky coming along in leaps and bounds in only a few decades on the market.  As the manager at Sullivans Cove is quoted as saying:  ““We think it’s hilarious that we used to make the worst whisky in the world and now it’s the best!”

Best In The World?

Summary : Easily Australia's finest whisky distillery. The Double Cask isn't the world beater that its French Oak cousin reputedly is but it still makes a fine, affordable option for those looking to explore Australian whisky.

Previous: A-League 2013/14 – Round 25 – Besart Berisha, He Is Mental, And He Is Mad
Next: Youtube Friday: Yasmine: Brunei’s First Feature Length Film