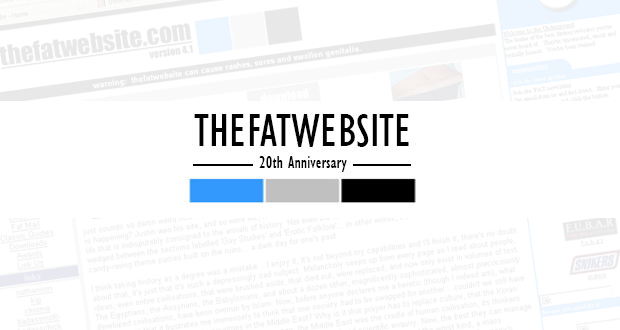 As of the first week of December, The FAT Website has been in existence for 20 years.  That’s over seven thousand days.  In that time, there has been over 2,500 posts written by over twenty different contributors.  Over one million words written.

The total number of views is estimated to sit at around one and a half a million.

Not bad for a little website that was started in 1999 on Geocities.com.

This is a quick trip down memory lane, revisiting the history of The FAT Website. 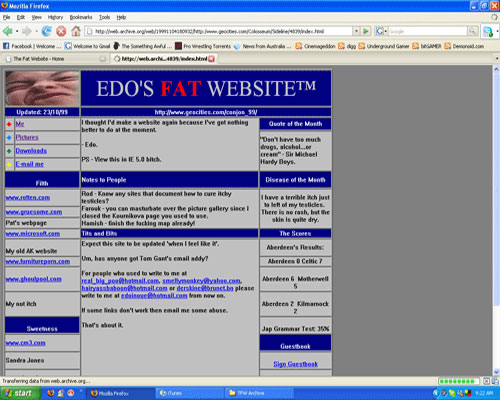 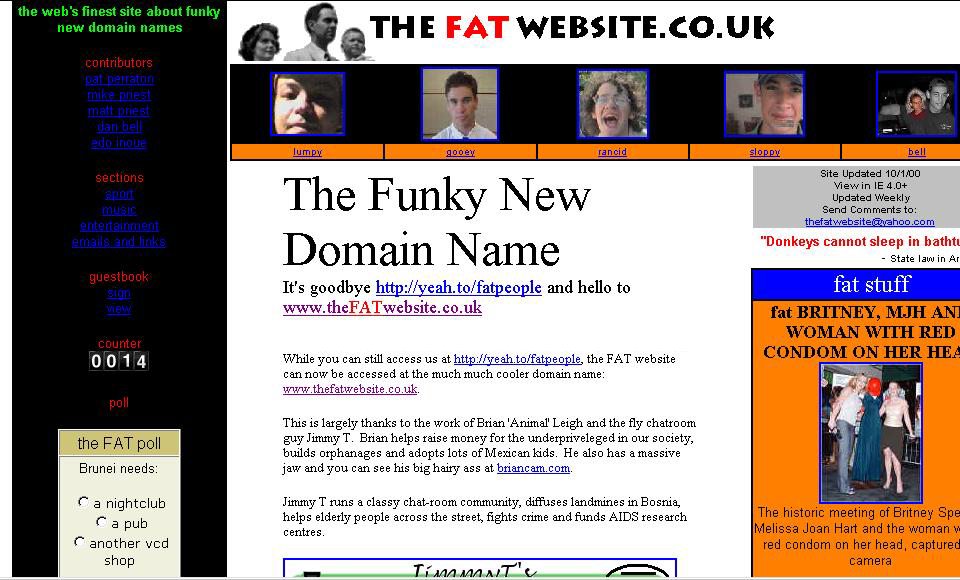 The FAT Website started as Edo’s FAT Website which first went online in December 1999 on the World Wide Web.  The screenshot above is the only recorded image of the original site.

TFW was part of a gigantic thriving community of websites that were categorized as ‘E/N’ – an abbreviation for Everything/Nothing – the name given to turn-of-the-century blogging.

In the late Nineties, there was a whole host of blogs similar to The FAT Website including The FAT Website UK (FWUK), Hot Japati, Bangkingz, Snixxx and F.U.B.A.R.  These all formed a local community of sites that readers would follow.  There would often be rivalries and feuds played out between the writers on these websites, theatrically overplayed in an attempt to drum up hits.  This could be see as an early form of ‘click-baiting’, before the term was officially coined.

In 1999, some of the other TFW writers had their own websites too.  There was Born As A Gimp (Pat), Mike Smellz (Mike) and Disco Frog (Dan).  Mike was actually the earliest TFW writer to have his own website.  Mike’s Homepage was established in 1996. 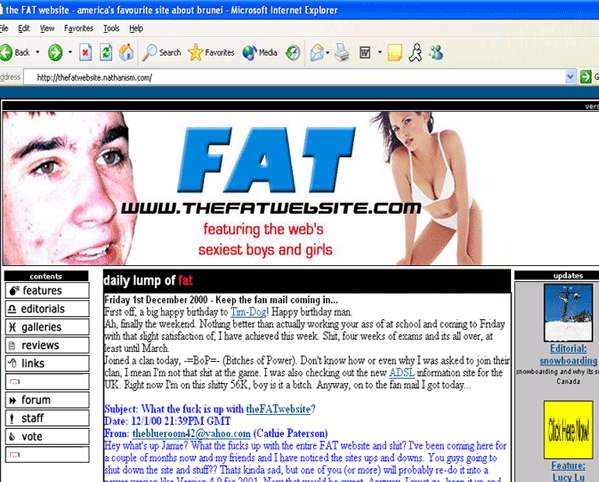 TFW Trivia:  The name ‘The FAT Website’ has no meaning or known origin.

The original five members of The FAT Website were Edo Inoue, Dan Bell, Mike Priest, Matt Priest and Pat Perraton.  These five friends established the shared blogging website in their final years of high school writing about whatever was on their minds at the time.  As the friends finished school and moved overseas and apart from one another, the website became an invaluable way for them to stay in touch in the days pre-dating social media.

The website drew a pretty large audience in this period, averaging over 1,000 unique visitors a day and having a regular readership in the hundreds. 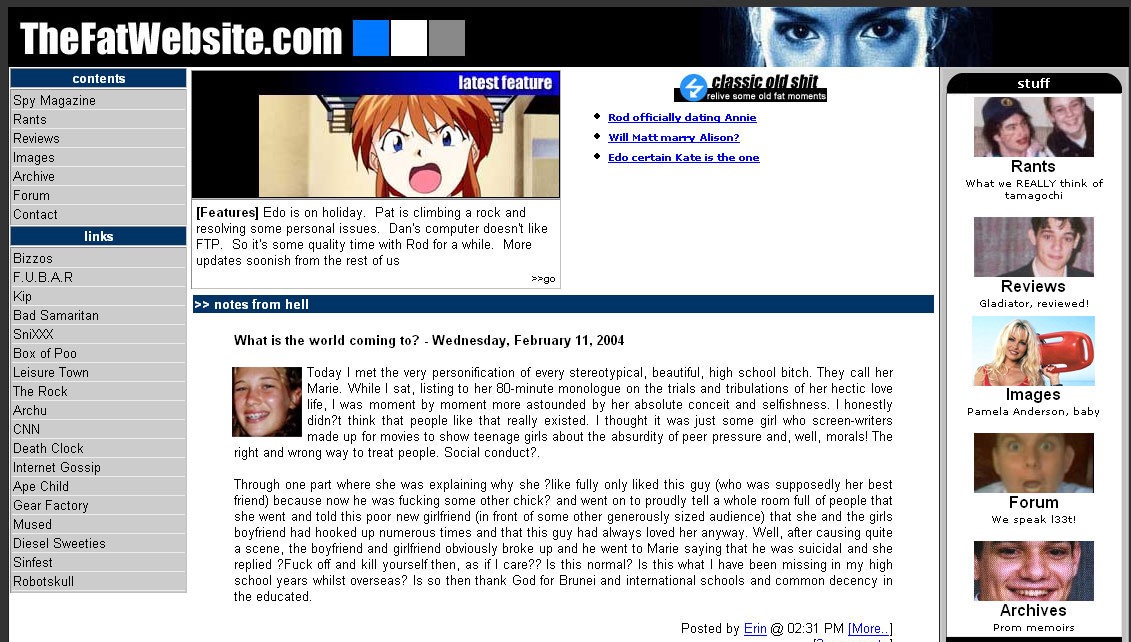 A lot of writers came and went in the first three years of TFW.  The most prolific writers beyond the original five included Sam Oakley, Angela Bowron and Erin Wallis.  Of that group, Angela is noteworthy for becoming the most successful self established blogger from the TFW community, developing her own site The Awkward Blog, based out of the UK, which enjoyed a healthy readership (it was only very recently discontinued).  Matt would also become a successful writer in his own right, forging a career in journalism and rising to the position of Editor in Chief at Esquire Middle East.  To this day he insists he learned everything he knows from those early TFW days.

The appeal of 2000-2003 TFW was the frequency of new content (it was not uncommon to see 3-4 new posts a day, each from a different writer) and the breadth of material.  Edo and Matt would write about their parties, Sam and Mike would enthuse about punk rock bands, Rod would write lengthy ruminations on a variety of academic subjects and Pat would throw out a line or two about snowboarding or call someone a poo poo head.  There was something for everyone and it was worth checking in multiple times a day. 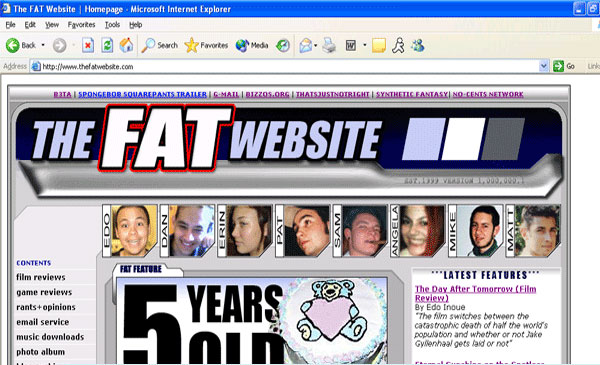 As the Internet evolved in the mid 2000s with the arrival of social media and Web 2.0, so did The FAT Website.  The site finally transitioned from the bloggers manually editing the HTML code and hoping they didn’t accidentally delete or overwrite the previous person’s entries to actually using a content management system.

During the mid-2000s the content of the site also began to change and resemble something closer to what TFW is today with reviews of films and games become a staple feature.  There was also an audio podcast (The TFW Show) which ran for 3 years which mostly speculated on the TV show Lost.  Ironically, every single episode of the podcast has been irretrievably lost due to lousy data management from the site administrator.

2004-2008 saw the most stable and prolific roster of writers on TFW which were Edo, Dan, Erin, Pat, Sam, Angela, Mike and Matt.  Over this period of time they collectively wrote over 1,000 posts. 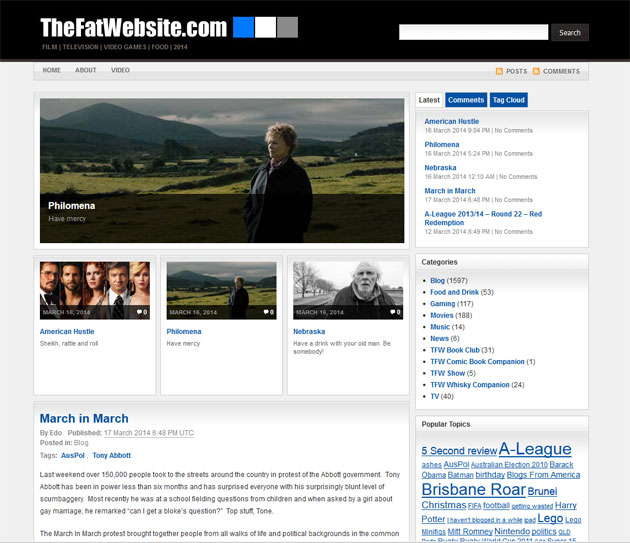 There was radio silence in late 2008 when TFW went down for its longest period of time since its inception.

This was largely due to ‘life stuff’ getting in the way of the site administrators.  TFW finally returned in 2009 after a near 8 month long absence, although unfortunately it came at a cost.  A lot of the archives from the previous two years were lost and the downtime lead to a lot of writers, now in their mid twenties and leading lives filled with adult responsibilities, moving on from TFW.  Soon the website was down to just Edo, just as it was with the original Geocities website in 1999.

The FAT Website continued to plug away through the 2010s.  Largely due to time constraints, there are fewer and fewer personal blog posts.  Film reviews, game reviews and photo essays are amongst some of the most common forms of content although major milestones in life, such as the purchase of a house or the birth of a baby, are still marked with a word or two.

Although much smaller than in its heyday, the website continues to enjoy a small but loyal following of readers who check in on TFW from time to time.

TFW Trivia:  Despite TFW having a small readership in the 2010s, the single biggest day in TFW history took place in 2017 when 4,000 people visited the site at once after it was linked on Reddit.  [Reddit Link]  [TFW Page]  [Traffic results]

Thank you for taking the time to read this.  As we edge closer to 2020 and TFW rolls along into yet another decade, I can’t help but feel very happy and proud that the website is still going after all these years.  I don’t get to write as often as I would like nowadays but it still makes me smile whenever I get the chance to bash out a few words at the keyboard and hit publish.  Or reading back through the archives and having a chuckle at something stupid I wrote ten years ago.

Sometimes people ask me if I have any sort of grand plans for the website or what I will do with it in the future.  The short answer is I’m happy writing this website for my own amusement and I intend to keep writing until I’m dead.  I’m not interested in trying to monetise TFW, grow the audience or stick to any kind of regular writing schedule.  I’m happy with the website just the way it is.

I like that The FAT Website has in some shape or form, documented my life from 1999 when I was a smelly, idiotic teenager with too much time on his hands to 2019 where I’m now married, have a kid and a mortgage and am trying to juggle adult responsibilities.

Social media plays a big part in how everyone records their lives in the 21st century but I think anyone who blogs has that little bit of extra colour and detail they can look back on when they’re in the mood to reflect.

Here’s to the next twenty years of The FAT Website.  I’ll keep writing.  Every chance I get.

Thank you for reading.

Previous: Toy Story 4
Next: The TFW 100 Greatest Games of the Decade