In the Boston Common you’ll see a line of bronzed ducklings inspired by Robert McCloskey’s Make Way For Ducklings, a popular picturebook for children about a family of ducklings who wander around famous Boston landmarks looking for a place to call home.

The first stop for our American vacation was Massachusetts in New England!

We stayed with family – Eileen and Alexandra – who live in Swampscott.  Despite its name, Swampscott is a relatively affluent town and is home to the governor of the state of Massachusetts.  I really loved the look and feel of the neighbourhoods which are full of lush green parks and the homes all have a pleasing architectural style which I believe is called Italinate (steeped rooftops, arched windows and doorways etc).  Oddly enough, despite the gentrified trappings of Swampscott, the most famous person to come out of the town that I could uncover was Van Halen frontman David Lee Roth.

Having a chance to stay with family meant we had locals who could take us around and show us some of the best places in Boston, both touristy and off the beaten path.  We were only in town for three days but we crammed in as much as we could. 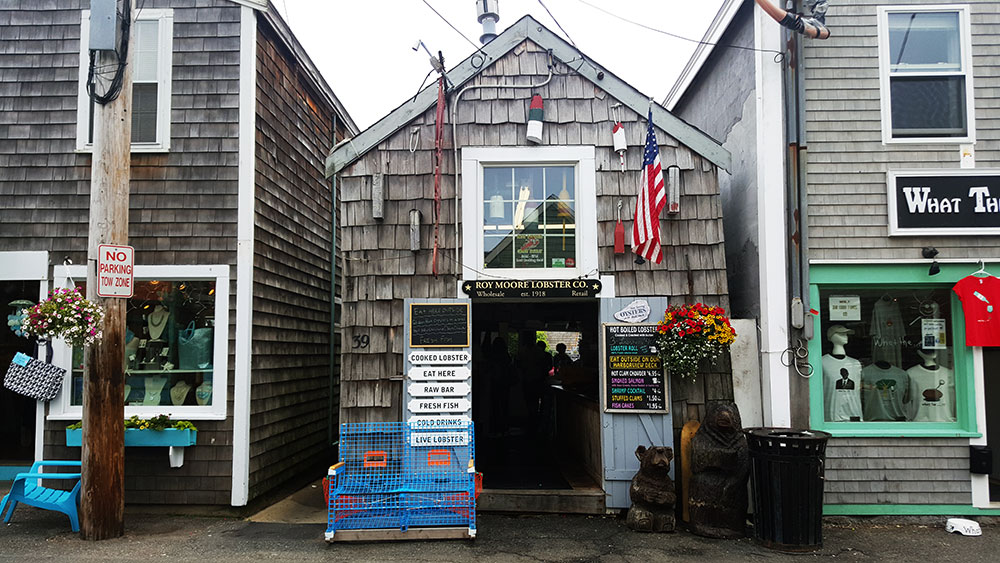 One of the first places we visited was Rockport, a sleepy seaside town with a population of 6,000

In the picturesque seaside town of Rockport, there is a precinct with the peculiar name Bearskin Neck.  It’s basically a couple of waterfront laneways that have a cluster of shops and eateries.  We visited just before the school holidays when it was relatively quiet and easy to get around.  In the middle of summer, I’m told the place is pretty much packed shoulder-to-shoulder with holidaymakers.  There are plenty of little boutique stores offering clothing, knick knacks and trinkets so its a handy place to go if you want to stock up on souvenirs to take back home.

Food-wise, I got to try my first ever saltwater taffy in Bearskin Neck.  It’ s a type of confectionary thats kinda sweet but surprisingly flavoursome.  There’s also a great fudge store and plenty of ice cream too.  The real highlight in Bearskin Neck however is the seafood and for that, you need to go to Roy Moore Lobster Co. 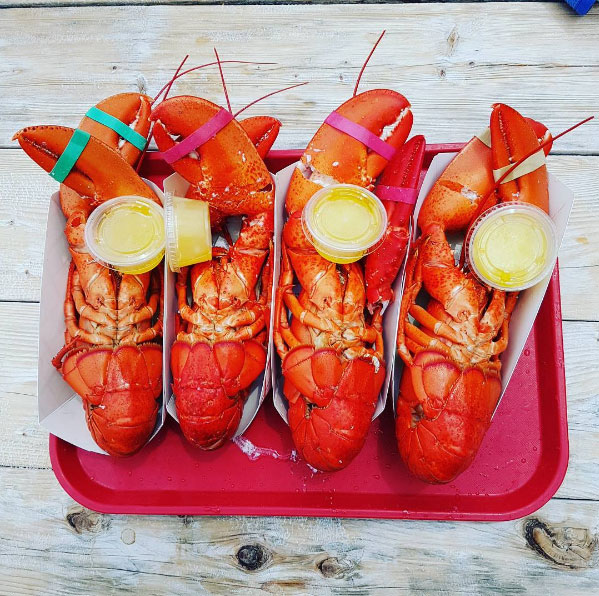 The shopfront looks rather unassuming but inside you’ll find a massive selection of fresh seafood served at prices that are absolutely sensational for anyone coming from Australia.  At Roy Moore Lobster Co you can get three lobsters for $40.  The same portion in Australia would set you back a couple of hundred bucks at least.  The lobsters are cooked right in front of you, served with a tub of melted butter and will be served up on a tray within minutes.  I can still remember the sweet, succulent taste of those glorious lobsters nearly two months later.  They were unbelievable.  We also had some clam chowder (also amazing) and knocked it back with a couple of sodas.

I saw and did a lot of great things on this trip but I often come back to that lunch in Rockport as one of the highlights.  If you love seafood, you owe it to yourself to make the pilgrimage to Rockport one day.  It doesn’t get much better than this. 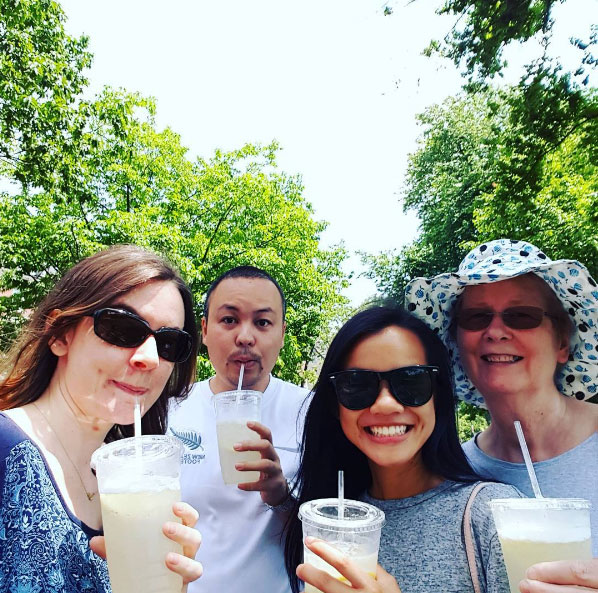 Boston is the home of the American independence movement with the political protest at the Boston Tea Party sparking a chain of events that lead to the American Civil War.  In modern politics, the ‘Tea Party’ name has been co-opted by the grassroots conservative movement that is currently causing the Republican party to eat itself.  Interestingly, Boston itself is actually a liberal stronghold having voted for the Democrats in the last seven elections.  Massachusetts was also the first state to legalise marriage equality.

Anyway, thanks to the Boston Tea Party, history buffs have plenty to enjoy and take in when travelling around Boston as it is home to the Freedom Trail, a two and a half mile tour of some of the most significant milestones of that era.  There’s the Bunkerhill monument, the King’s Chapel Burial Ground, Paul Revere House and a statue of Benjamin Franklin amongst other things.  It’s right up there with a trip to Washington D.C for best places to immerse yourself in American history.

We didn’t have time to take in every stop along the trail but we caught a couple of the landmarks as we made our way around Boston Common – the central park in downtown Boston – which is an absolute pleasure to stroll around during summer.  Get yourself a lemonade and enjoy a leisurely amble across the grounds.  You can check out the Make Way For Ducklings statue and the swan boats (operating in Boston for over 120 years) which are a relaxing way to get around the pond in the middle of the Common. 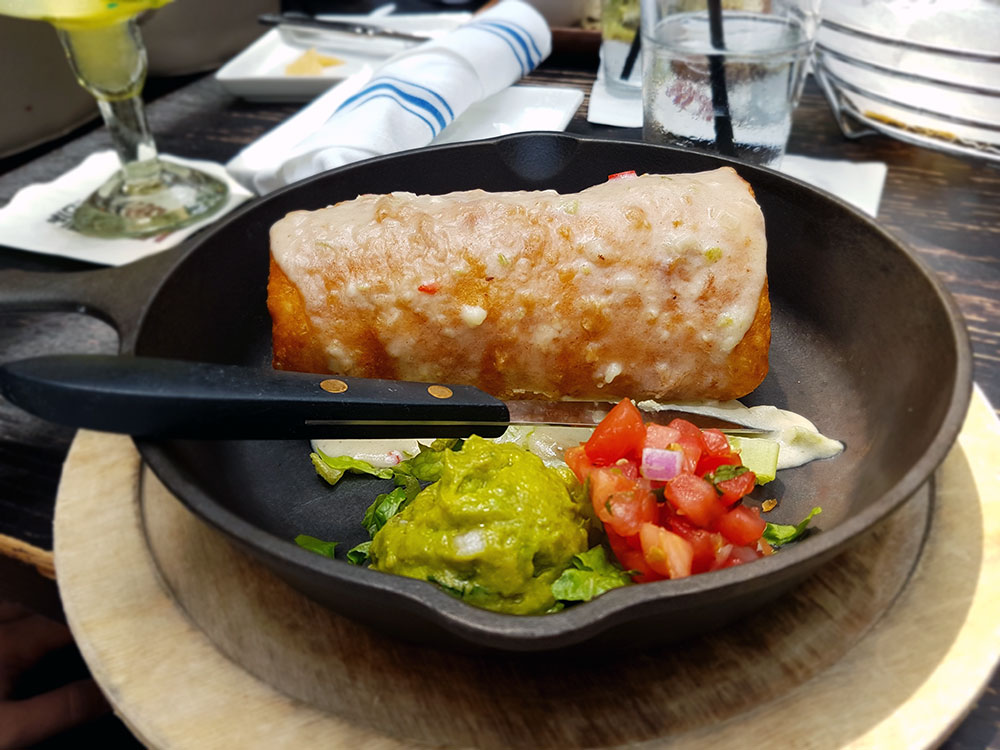 During our day in Boston, we took a break from sightseeing and shopping to lunch at Lolita Cocina.  It was there that I had my first ever chimmichanga.  It is a sort of deep-fried burrito filled with rice, carne adobada (marinated beef), jalapenos and vegetables.  It was delicious but also a little overwhelming.  You could have rolled me out of the restaurant after I finished eating one. 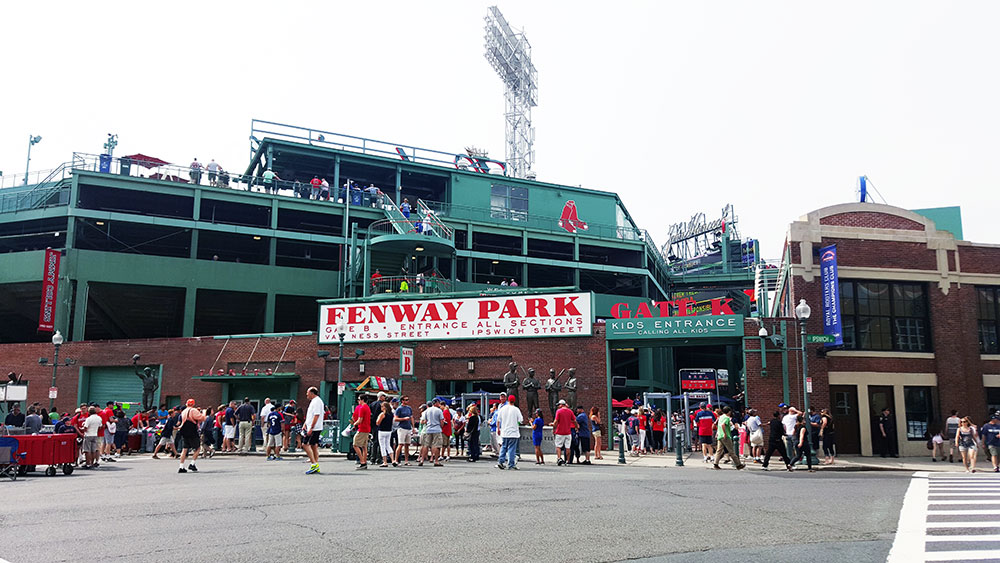 Fenway Park – home to the Boston Red Sox and the oldest baseball ground in Major League Baseball having opened in 1912.

One of my most anticipated moments of the holiday was a trip to Fenway Park to see my first ever ball game with the world famous Boston Red Sox.  Despite having never been to a game before, pop culture had shaped many expectations for what I was in for.  Hotdogs, whacky mascots, home runs and something called the ‘Seventh Inning Stretch’.  I was also curious as a cricket fan whether baseball and cricket shared any commonalities as a spectator sport.

We went to see the Boston Red Sox play the Toronto Blue Jays on a Saturday afternoon.  Fenway has a carnival-like atmosphere in the lead up to the game with live musicians, circus acts and hawkers all contributing to the atmosphere outside the ball park.  To blend in with the locals, I picked up a Red Sox cap and a shirt.  I also stopped for a couple of pale ales and a hot dog from the concession stands.  After that, I was all set! 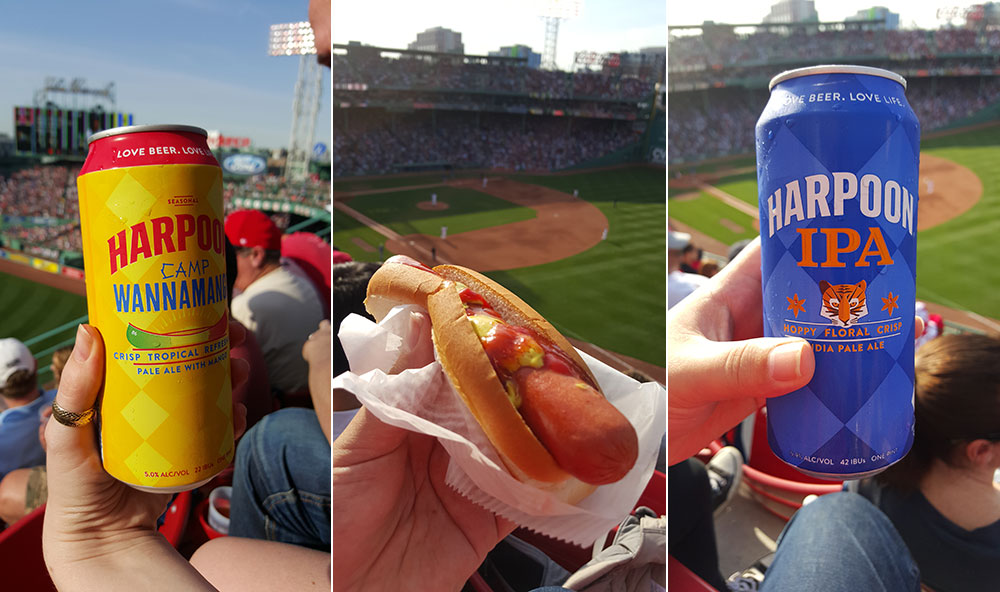 After standing for the national anthem and observing a moment of silence for the recently departed Mohammed Ali, the game was underway.  Early into the second innings, a commentator announced over the PA that the next batter walking to the mound was ‘a designated hitter’.  I didn’t know what that meant so I asked the guy sitting next to me.  His name was Shawn.  “Mate, I have no idea,” he said, “I’m from Sydney.”

This sparked a chain of conversation with the people sitting around us.  Shawn was from Sydney.  The next seven guys sitting next to him were on a Bucks Party weekend, having flown in far and wide from California to Colorado to Oklahoma.  Some of them knew a thing or two about baseball, others didn’t.  Either way, it meant we had plenty of company for the game itself which added to our experience immensely.  One of the most consistent and enjoyable aspects of travelling through America is how friendly the locals are.  They love a good chat and seem naturally inquisitive and helpful.

Anyway, we got our answer about the ‘designated hitter’ after a lengthy discussion between the people sitting in our row.  Apparently there are two divisions in Major League Baseball – a National League and an American League.  Although they are mostly the same, there are actually small differences in the rules for each competition.  Apparently, pitchers are traditional lousy batters.  So in the American league, when its their turn, the team can replace them with a ‘designated hitter’, someone who can actually bat.  In the National league however, they just send the pitcher out there anyway.  So there you go. 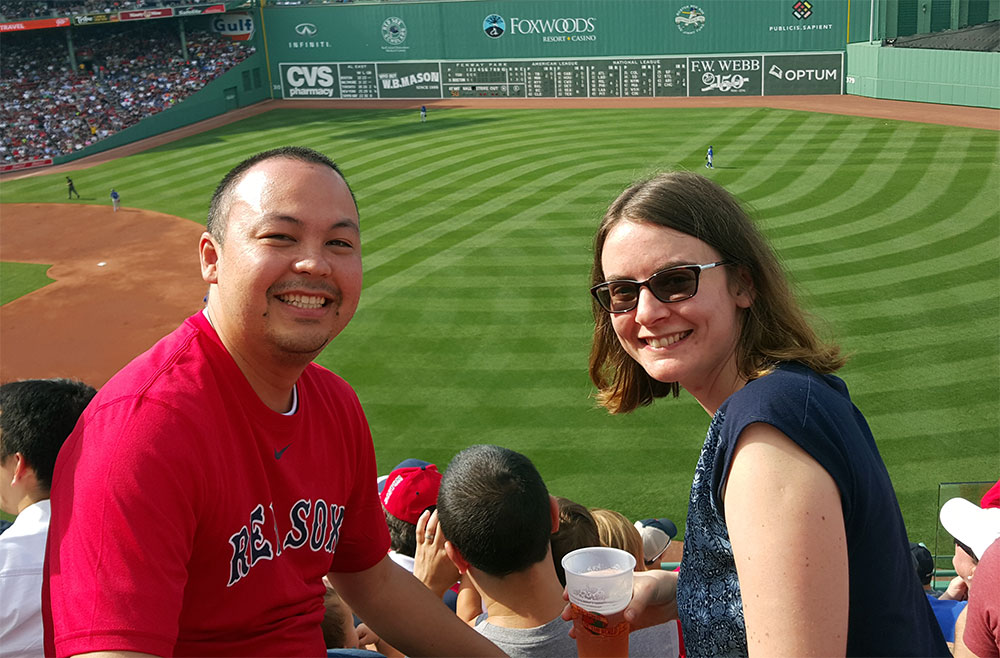 A typical baseball game clocks in at around three to four hours so its not unlike watching a game of Twenty20 cricket.  And just like spending a day at The Gabba, baseball can be enjoyed as a combination of eating, drinking and socializing with one eye on the game for when something big happens.  Unfortunately for us, the game we saw didn’t have a home run.  However it was still a blast to see the fans come out of their seats for their star player David Ortiz, who is affectionately known as ‘Big Papi’.

Some other things I picked up at Fenway Park about baseball:  The stadium is a cobbled together hodge-podge of different looking terraces which reflects its long history and multiple renovations.  The big green wall in the photo behind us is affectionately referred to by locals as The Green Monster.  Fans are encouraged to get the last call of food and drinks and stretch their legs during the ‘Seventh Inning Stretch’, a quick break in play before the last couple of innings of the game.  During the game we watched, an improptu karaoke session broke out during the eighth inning where everyone sang ‘Sweet Caroline’.  A regular baseball season is incredibly long.  Longer than any other professional sporting league I know of.  Each team will play a truly mind boggling one hundred and sixty two games.  ONE HUNDRED AND SIXTY TWO.  As you can imagine, that means teams will regularly play back-to-back games for 5-6 days at a time.  To cut down on travel, this also means playing the same team several days in a row.  I can’t imagine the concept of being a season ticket holder for baseball.  Is there really anyone who has the time to watch eighty home games?  And if you win, do you think to yourself that the game you saw contributes less than 1% towards the final league standing at the end of the season?  It’s really quite extraordinary. 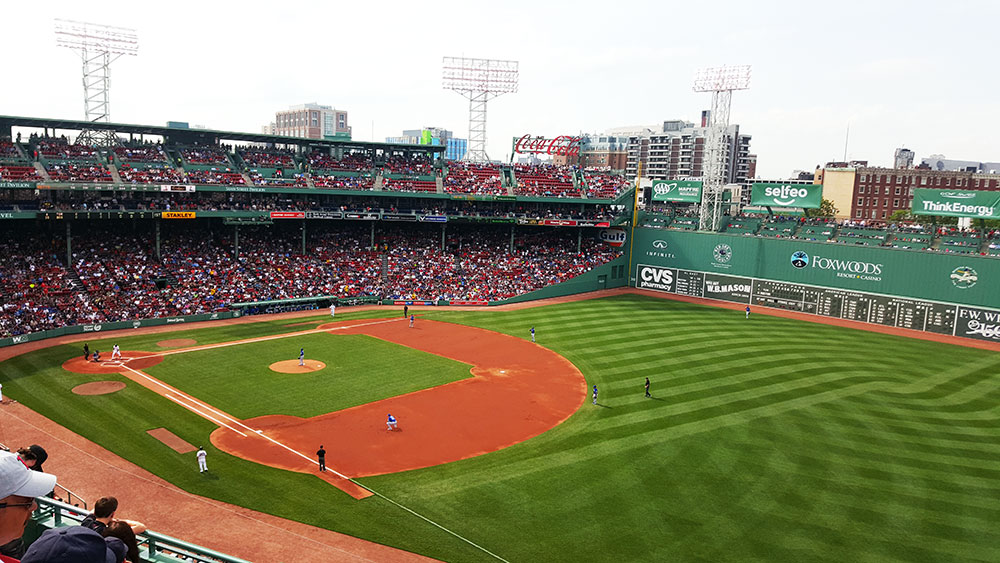 One last thing about watching a ball game at Fenway Park in June.  When it gets to the final innings, the sun begins to set and the sky turns pink, creating an amazing backdrop for the conclusion of the game.

The game we saw concluded with the Red Sox defeating the Blue Jays 5-2.  In the two months that have passed since I saw them play, they’ve played another 54 times.

That was the last highlight of our time in Boston.  That night, we had a burger from Five Guys (more on that in a burger-themed post I intend to write).  The next morning we were off to Chicago!