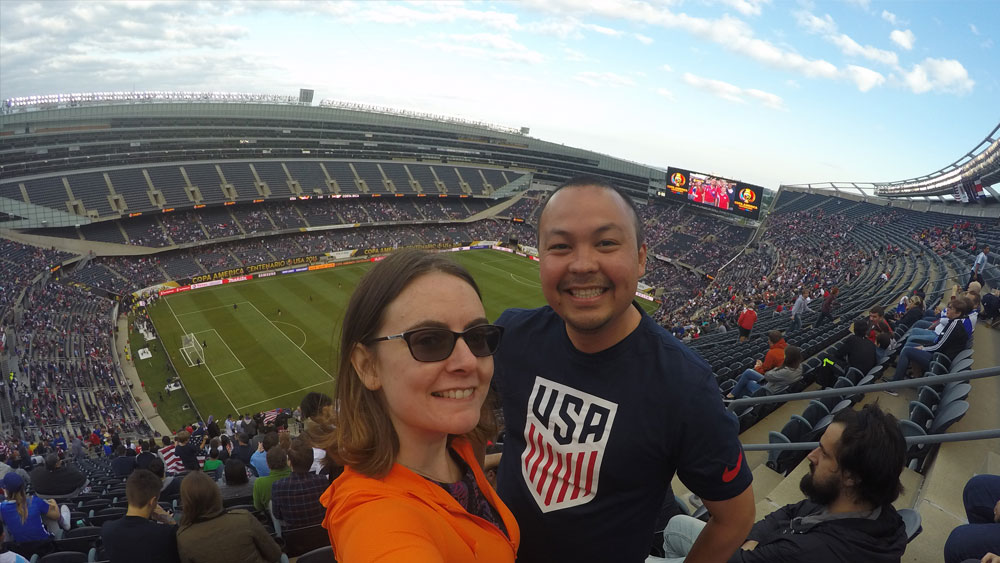 Watching USA vs Costa Rica in the Copa Centenario at Soldier Field, Chicago.

The next stop on our American summer vacation was a three day visit to Chicago, the Windy City!

Chicago is the third most populous city in America and is a significant contributor to the cultural fabric of the nation.  It is the home of the Chicago White Sox, deep dish pizza, Soldier Field, Lake Michigan and the Sears Tower.  Oddly enough, Chicago’s crime and corruption are so notorious that they are effectively a part of the city’s identity.  Their most famous mobster is of course the Prohibition-era crime lord Al Capone but even in modern times, the city hasn’t been able to shake their association with crime.  Chicago is currently the murder capital of America having more homicides than any other city.  Also four of the last seven governors of Chicago have gone to prison.

Despite its reputation however, Jen and I were blown away by Chicago and it was one of our favourite destinations on our holiday.  The architecture in the city is a sight to behold.  I found myself enamoured with the city’s incredible skyscrapers and subsequently I picked up a copy of Erik Larson’s bestseller The Devil In The White City which goes into some detail explaining how the Chicago World’s Fair and the Great Chicago Fire of 1871 helped shape the modern Chicago skyline and who these men were that designed the Chicago we know today.

Chicago is also a very green city.  Some of the city’s biggest attractions – Soldier Field, The Field Museum, the Art Institute of Chicago and the Shedd Aquarium – are all situated near Millenium Park, a lush area of parkland that sits between downtown Chicago and Lake Michigan.  In the summer, you can see couples taking a stroll in the park, kids playing under water fountains and people generally having a good time.  It gives the city a relaxed and inviting sort of vibe.

We only had a short amount of time in Chicago but thankfully, its a very easy city to get around.  Public transport is very convenient.  You can use the PayWave on your ATM card to tap and go on and off the L-train.  Also, a lot of the city’s attractions are in very close proximity to one another.  Even in three short days we had enough time to get through our list of attractions and still make time to go out for drinks at night and make some new friends!

As we found to be the case with most other cities in America, the locals are very friendly and love to have a chat.  Not unlike New York, I think Chicago natives have a reputation for being brash or outspoken but we found them to be cheerful, generous and accommodating. 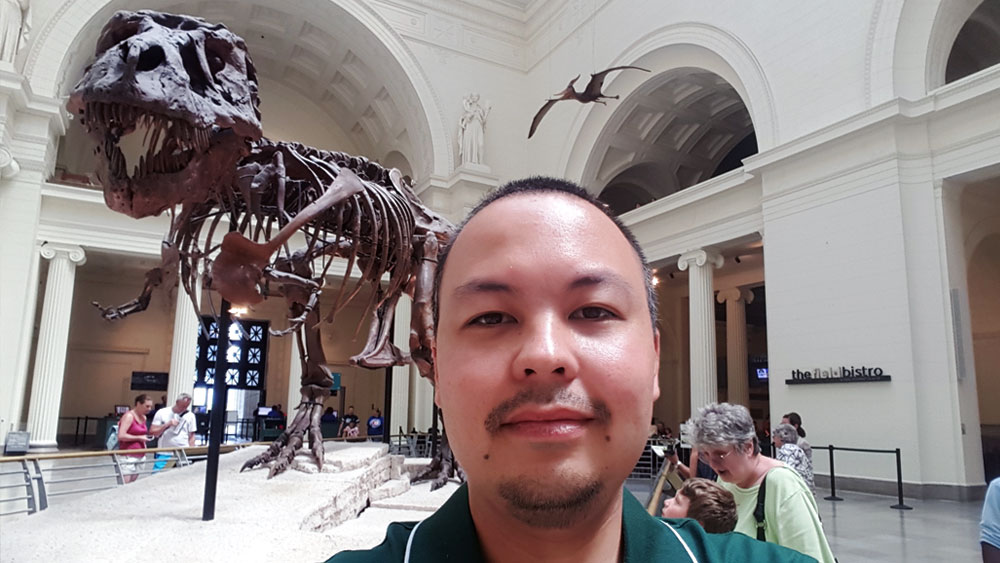 A selfie with Sue the T-Rex at the Field Museum, Chicago.

Here’s what we got up to in Chicago.  Our first stop was Willis Tower, which I had always known by its original name – Sears Tower.  Completed in 1973, it is the second tallest building in America and the fourteenth largest in the world.  It’s a pretty good spot to start your visit to Chicago.  The view is incredible on a clear summers morning and it helps get your bearings for what is a pretty big cityscape. 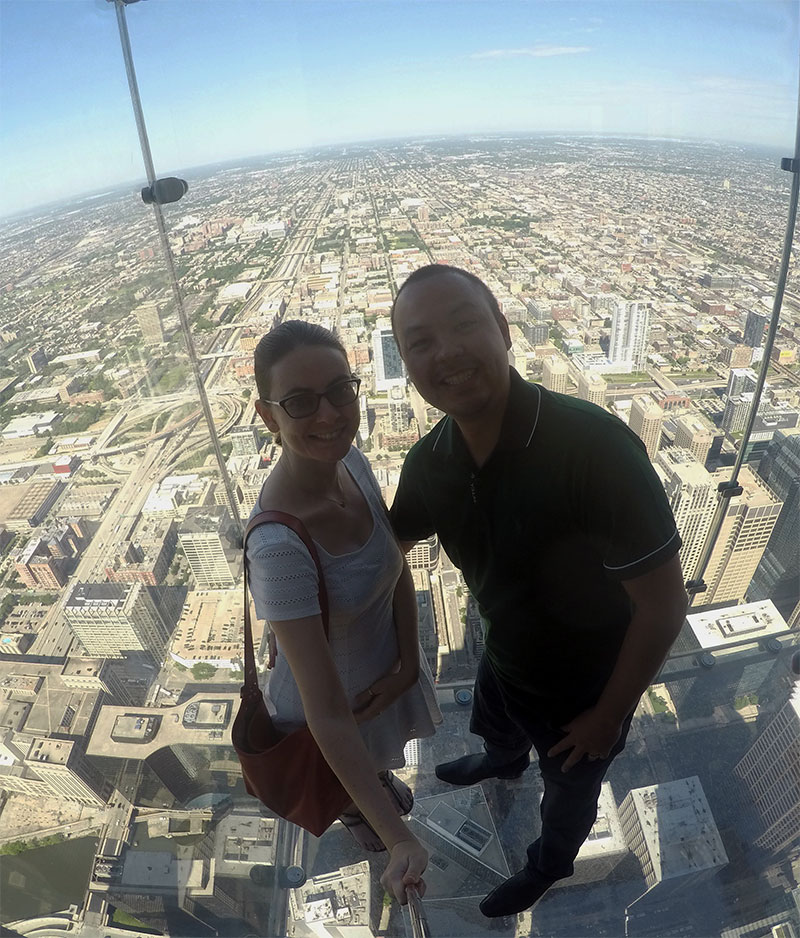 Of course, if you’re visiting Willis Tower you’ll owe it to yourself to visit the Skydeck where you can stand in a glass container where you can see Chicago in all its glory, including the streets 108 stories below your feet!  As someone with a major fear of heights, it certainly got the heart racing.

Our next stop was to make our way around the various exhibitions and museums in Chicago.  Let me tell you, they are all world class.  You can get a CityPass for $98 a head which gives you access to pretty much all of them.

We started with the Art Institute of Chicago which is home to some of America’s most famous paintings include Night Hawks and American Gothic.  The AIC has a vast and formidable range of exhibitions including African American, Impressionist, Expressionist, American Modernist and Iconic galleries.  I learned that American Gothic constituted part of a movement by conservative American painters who were alarmed by the industrial revolution and reacted against it by painting a series of works that idealised the rural lifestyle.  This particular exhibit actually had some of my favourite works that I saw that day.  Americans are really spoilt when it comes to art exhibits.  They have three incredible institutions – MOMA, the Guggenheim and the AIC – which collectively house some of the most important and influential art works of the last five hundred years.  We really have nothing that compares back home in Australia. 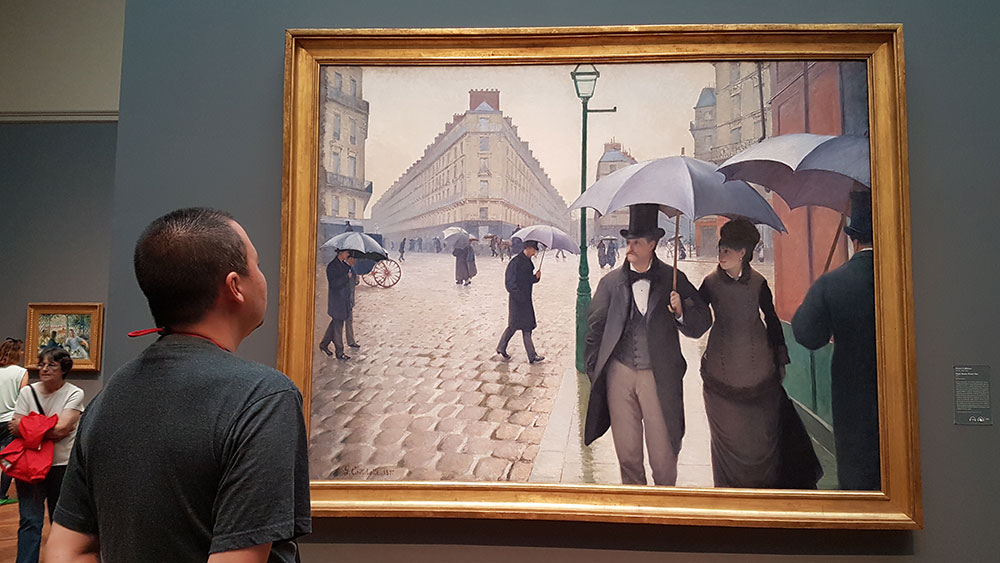 The Art Institute of Chicago, Chicago.

Next up, we went to the Field Museum.  As with the AIC, it is a very worthwhile experience and home to all sorts of amazing exhibits.  One of the special attractions that was showcased when we were there was the Terracotta Army from China!  It was a very special treat to see first hand these incredibly crafted soldiers from 210BC, made to accompany the first Emperor of China into the afterlife.

One of the permanent attractions at the Field Museum is Sue, the world’s largest and best preserved tyrannosaurus rex skeleton.  My inner ten year old was absolutely thrilled.

After that, we went to see the Shedd Aquarium.  Of all the places we went to in Chicago, I think this was the only one that didn’t totally blow me away.  I think part of it is that in Australia we have aquariums that are equal to the Shedd in terms of attractions and facilities whereas we have nothing to compare to the AIC and the Field Museum.  The other problem we had at the Shedd that we didn’t experience everywhere else was the crowds.  The line for the Shedd ran out of the building and was a couple of hundred people deep.  I say that as no exaggeration.  There was literally a line snaking all the way around the building just to get in.  We managed to skip the queue thanks to our CityPass but predictably, it was absolutely crowded inside. 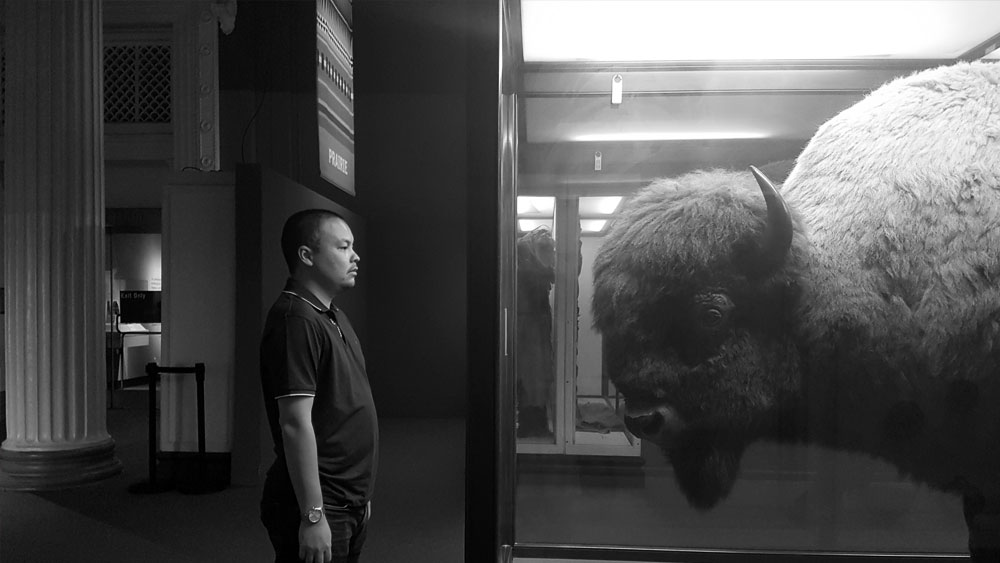 One of our biggest regrets on our trip to Chicago was running out of time to properly explore the Museum of Science and Industry.  There was all sorts of cool exhibits inside but unfortunately we saw almost none of it because the museum was coming up to closing time.  Mores the pity because it looked amazing. 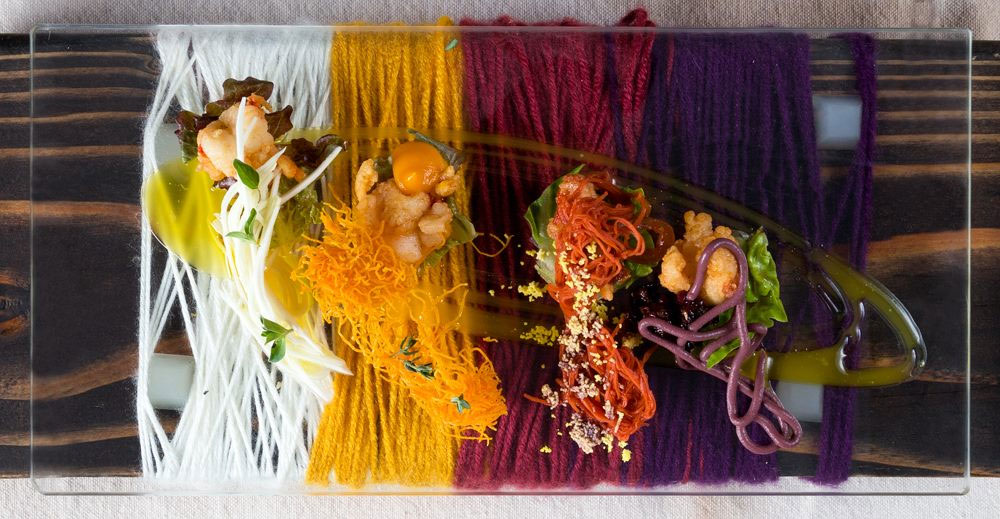 We had a lot of plans for wining and dining in Chicago.  Some of our plans came together.  Some of them didn’t.

One of the best loved culinary contributions to come out of Chicago is the deep dish pizza.  We asked a few locals (mostly our Uber drivers) where they would recommend.  A couple of people suggested Gino’s East.  So we went, we waited over an hour once we ordered (!) and were left slightly underwhelmed by what we got.  It certainly wasn’t bad but it didn’t exactly rock my world either.  Maybe I got them on a bad day.  Maybe I built it up too much in my head.  Or maybe New Yorkers are right and thin crust really is the way to go.

Another thing that didn’t quite pan out the way that I’d hoped was a trip to Steak n Shake.  It was my favourite film critic Roger Ebert’s favourite burger chain and I can still remember how lovingly he described those burgers in his memoirs (see my blog post – American Burgers).  Unfortunately, none of the Steak n Shakes in Chicago are anywhere near the city.  I wasn’t prepared to shell out $20 to take an Uber into the middle of nowhere just to try one.  Fortunately for me, I would come across a Steak n Shake on my road trip through the American South.  You’ll read about that in another blog post. 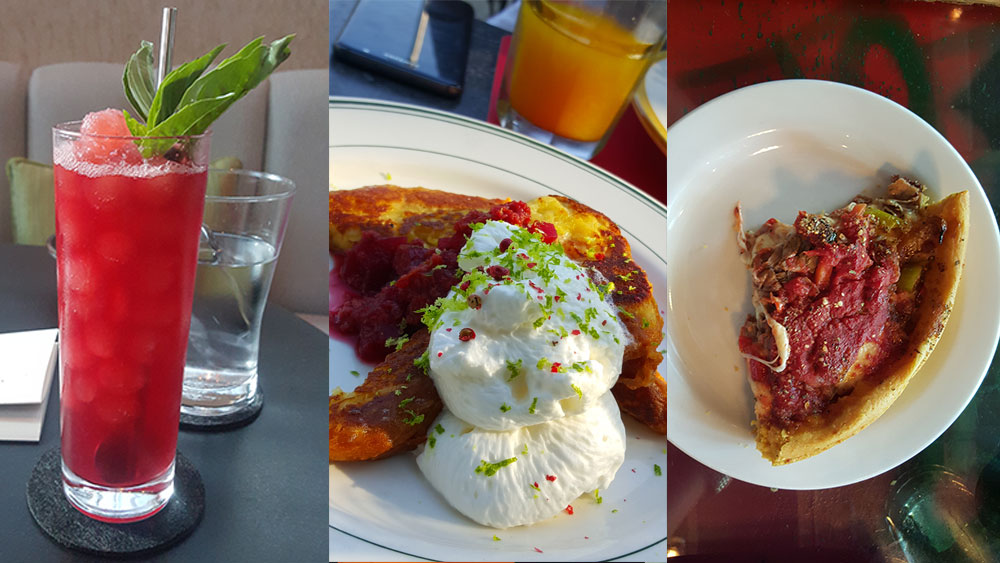 Just before our trip to the States we saw the Netflix series Chef’s Table dedicate an episode to Chicago restaurateur Grant Achatz.  Achatz is at the forefront of creative contemporary dining in America, a Trans Tasman counterpart to Heston Blummenthal.  He has four restaurants that each have a defining concept at their core:

We ended up getting reservations at two of the venues – Next and The Aviary.  Both were absolutely exceptional and deserving of a seperate blog post to be discussed in full.  But to give an idea of how The Aviary was, here’s a short clip of some of the cocktails I had there. 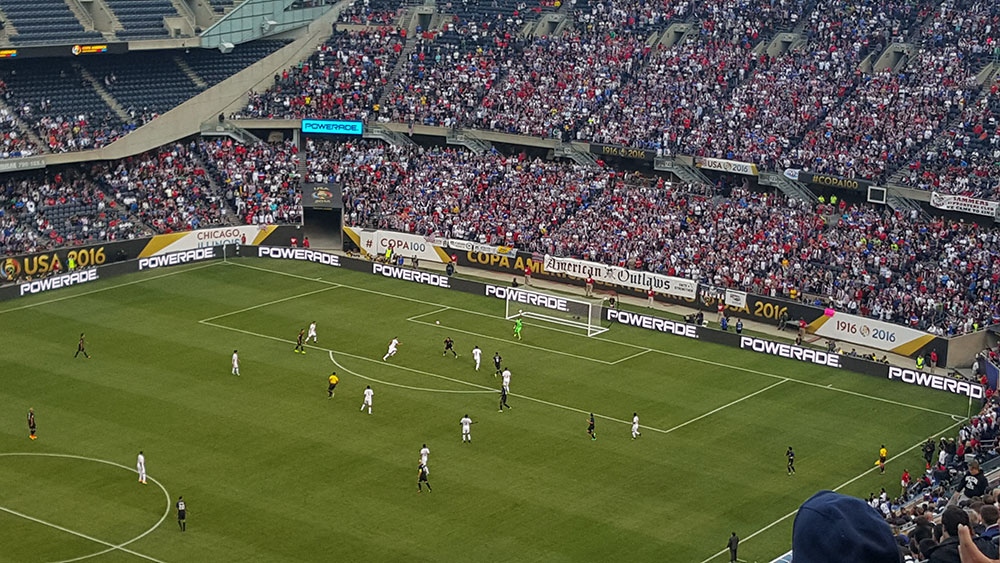 On our last night in Chicago we went to see a Copa Centenario football match between the USA and Costa Rica.  I was so pleased when we booked the holiday to discover this opportunity to see a game played at the storied Soldier Field stadium, home to the Chicago Bears.  The venue is 92 years old and in its modern incarnation, seats 61,000 fans.  It is one of the most iconic sporting venues in the world.

In the game I watched, the US Mens National Team (USMNT for short) made short work of Costa Rica, beating them 4-0 with star striker Clint Dempsey getting on the scoreboard.  The atmosphere at the game was terrific with the American Outlaws – the USMNT’s active supporter group – making plenty of noise and getting behind their team.

One of the coolest experiences we had on our holiday took place the night before the game.  We went to Millennium Park where a pre-match Fan Forum was being held.  Basically, it was a venue where fans going to the game could meet up and have a few drinks.  Jen and I made some new friends with a group of travellers who had come from Kentucky to see the game.  They were old high school friends who would travel and watch football games together as a way of staying in touch.

We exchanged details with these guys and a few weeks after the holiday, one of our new pals sent us a care package that included the kit for their local football team – Louisville City FC who currently play in the third division of the United Soccer League.  How cool is that!  I was incredibly touched by this gesture and I’ll be sending them back a Brisbane Roar top to repay the favour.

Truly it is The World’s Game 🙂 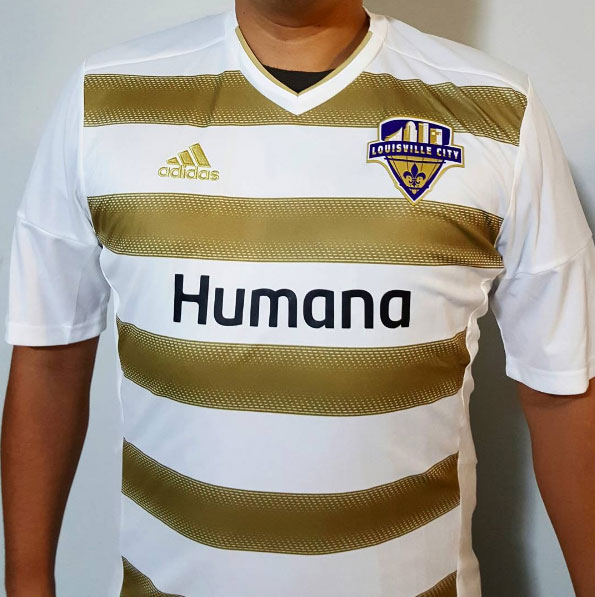 The next morning we flew out to Orlando, Florida.

Tagged with: Aviary Blogs From America Chicago Copa America Next

Previous: Otto Ristorante
Next: Highlights From Week Two Of the Rio Olympics