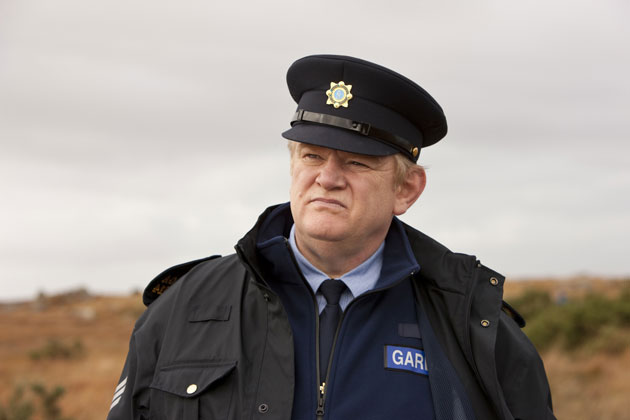 There’s a scene in The Guard where a young Irishman tells Don Cheadle that there’s a good movie to made based on the events that occured in the preceeding 90 minutes.  “There’s a hero at the centre of the story.  Now throw in some action, explosions, a couple of hot girls.  Who wouldn’t want to see that?”

It’s a pretty good formula for success.  The Guard is Ireland’s highest grossing independent film of all time.  And its got some serious indie credentials – all the credits in this film are in Impact font in bright red colouring.

The Guard tells the story of an FBI agent Wendell Everett who is assigned to a case in Ireland to stop an international drug smuggling ring.  He forms an odd-fellows partnership with Gerry Boyle, the local law enforcement.  Everett is the straight man.  Boyle is a walking P.C offender.  He constantly makes jokes about Everett’s ethnicity.  He ingests the drugs from the criminals he apprehends.  He pays for escort girls.  He sells firearms to the IRA.  But what wins him over with the audience is a heart of gold underneath this gruff exterior.  His moral compass rejects bribes from drug dealers, makes sure he spends time with his terminally ill mother and offers support to the bereaved widow of a slain police officer.

The Guard offers plenty of bang for its buck.  It’s a quickfire ninety minutes and in that time you get a murder mystery, a fish out of water buddy comedy, an explosive action finale and the aforementioned hot girls.  Perfect.