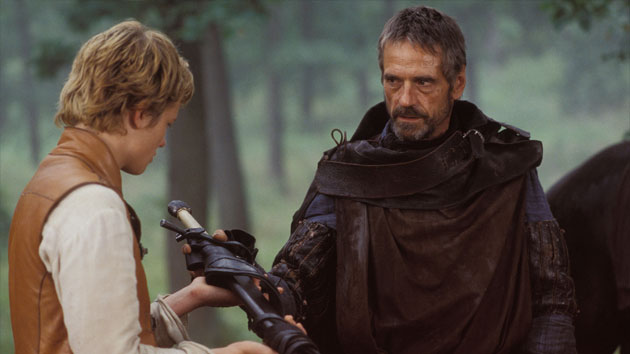 It’s been four years since the conclusion of The Lord of the Rings films and predictably, there has been a glut of fantasy film franchises released in its wake and depressingly, none of them have come close to the benchmark set by Peter Jackson.  In fact, most of them have been dreadful and sadly, seem to be made with several sequels already in tow.

In Eragon, the film adaptation of the first book in a fantasy trilogy, the eponymous lead is a young farm hand who lives in Alagaesia, a land ruled by the tyrant king Galbatorix.  Through sheer providence, Eragon stumbles upon an egg which hatches and a psychic blue-skinned dragon is born.  Eragon nurtures the dragon and then meets the mysterious villager Brom, who teaches him about dragon-riding and explains to Eragon he is fated to take on Galbatorix.  Spurned by the death of his uncle at the hands of the king’s soliders, Eragon learns the ways of the legendary dragon riders and sets about finding a rebel resistance group that will help challenge Galbatorix’s empire.

Thats right.  Eragon‘s framework is almost a complete rip off of Star Wars: A New Hope.  It’s apparent five minutes into the film that Brom will become a father figure to Eragon and then die tragically at the hands of the enemy.  He’s only a few shades away from saying ‘Use the force, Luke’.  I think he actually says ‘Use your magic, Eragon’ instead.

Given its healthy budget and the reputation of the source material, Eragon is a pretty weak film.  The cinematography and special effects for a story about dragons in a magical is surprisingly bland and the characters are formulaic and unengaging.  Its pretty difficult to make a fantasy world look less interesting than our own.

There is no consistency to the world of Eragon.  In the opening minutes, the film’s narrator tells us that Galbatorix has defeated those who oppose him and rules over the land with no resistance.  Yet when we see soldiers at the start of the film recruiting a young farmboy, his parent weeps that ‘too few return from duty’.  Why are these soldiers dying?  The narrator just told us there is no war on.

Similarly, Peter Buchman’s screenplay is churched up with some typical ye olde fantasy dialogue which young children will probably find hard to follow.  In the same film however, Galbatorix, who is supposedly king and ruler of all the lands, lives in a dank dark cave and hangs out with inept and simplistic henchmen.  He has the same depth of character as Skeletor.  In fact, just like what used to happen every week on He-Man, Galbatorix has about three different scenes where his henchmen return in tatters and explain that their latest plan failed to stop the hero.  Eragon would’ve been a much better film if it had a consistent focus in determining whether its audience should be preteens or adults.

Just like Pirates of the Carribean probably made you realise and wonder why there aren’t already lots of great pirate films, Eragon made me sit back and realise how strange it is that there is no truly great fantasy film about dragons.  In fact most have been middling to downright terrible.  As aforementioned, Eragon is the first chapter of a franchise so there will future attempts to get it right.  The ingredients are in place for something special:  These films have a big budget, a popular source material with a large built-in audience and they have actors on board who are very talented.  Here’s hoping it comes together better next time then.

Previous: Die Hard 4.0
Next: Harry Potter and the Order of the Phoenix