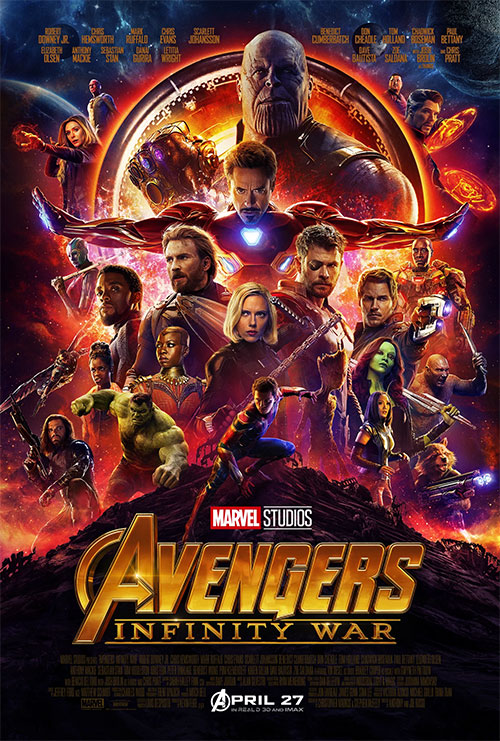 Avengers: Infinity War is the culmination of a storyline nineteen films and over two thousand five hundred minutes in the making.  It ties together narrative strands that have been coming together for ten years and unfolds as a multi-million dollar spectacle that carefully balances screen time for over twenty different protagonists in a single film.  In over a hundred years of cinema, I don’t think there has ever been a production quite like this.

Since the Marvel Cinematic Universe began, I was initially impressed by Iron Man but then felt pretty dubious about the prospects of the MCU as we got mediocre fare such as Incredible Hulk, Iron Man 2 and Iron Man 3.  It just didn’t feel like these films had the freshness or quality to maintain the output they had committed to.

Over time however, I’ve found the quality of the films has markedly improved – with Winter Soldier and Black Panther being some noteworthy highlights – and that the MCU has really come into its own and hit its stride.  When you look at how parent company Disney has struggled with the number of staffing changes and reshoots for its other megabucks franchise Star Wars, or seen how their rivals DC have labored with their own series of films, Marvel Studios really compare favorably with the consistency and quality of their films.

It all comes together with Avengers Infinity War where Thanos, the genocidal world-conquering titan begins to assemble the infinity stones, six gems that give him mastery of space and time.  Thanos has been lurking in the background of most of the previous Avengers films but this is his moment.  His goal is nothing less than to wipe out half of all life in the known universe to restore ‘balance’.

To stop this intergalactic threat, almost all of the Marvel superheroes (except Hawkeye, Antman and Valkyrie for some reason) must unite to defeat the titan and his army.  The stakes couldn’t be much higher and not everyone will survive the struggle. 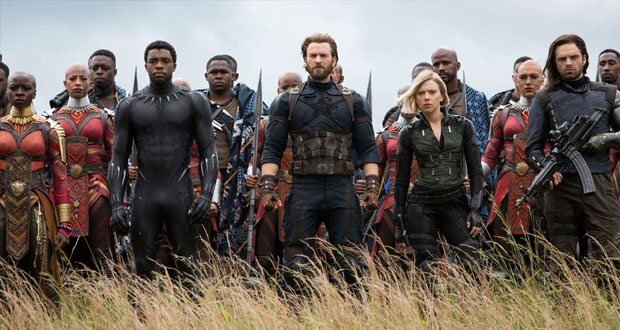 I’m happy to say that in spite of the weight of expectation and the mind-boggling number of super heroes that are all jostling for screen time, Avengers Infinity War manages to come together very nicely.  The key to its success is its cheerful tone which isn’t afraid to poke fun at itself and a sharp understanding of how to please its fan base.  Let’s be honest, a storyline centered on an interdimensional super villain seeking galactic domination is basically Saturday morning cartoon fare so instead of trying to get the audience to take it seriously with a dark and edgy production (*cough* DC Studios), Avengers is happy to let its colourful and zany cast of characters bounce off of each other with plenty of one liners while the audience soaks in the novelty of seeing Doctor Strange partner up with Spider-man, Thor making friends with Rocket Raccoon and Iron Man fighting side by side with Black Panther.

With so many super heroes cast in this film, it would be impossible to please everyone with the screen time allocation but I think the Russo Brothers showed good judgment in deciding who to center the narrative around.  Iron Man, Thor and Star Lord are all given prominent screen time while others are pushed to the periphery.  By comparison, I think a pretty major misstep with The Last Jedi was seeing Finn relegated to being a sideline character when most would have preferred to see him as the leading man.

Avengers Infinity Wars is part of a recent trend in Marvel Studios films where they’re finally getting themselves some memorable villains.  I really enjoyed Michael Keaton’s Vulture in Spider-man: Home Coming and Michael B Jordan’s Killmonger in Black Panther and Josh Brolin is no slouch as Thanos in Infinity Wars.  It’s a testament to his character that a lot of Thanos’ lines and actions have already become a part of pop culture.

For what this thing is – a gigantic pop culture juggernaut based off a comic book story written twenty years ago – Avengers Infinity Wars is entertaining from start to finish and far, far better than it has any right to be.  It ends on a fantastic cliffhanger.  It shouldn’t be possible but after twenty films and dozens of hours of super hero storytelling, the Marvel Cinematic Universe is still on a roll.

The Avengers and their allies must be willing to sacrifice all in an attempt to defeat the powerful Thanos before his blitz of devastation and ruin puts an end to the universe.