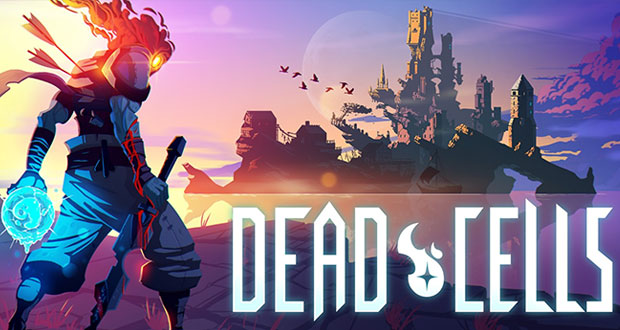 I was this close to giving up on Dead Cells when it got its hooks into me.

Developer and publisher Motion Twin refers to Dead Cells as a a “roguevania”, which is a pretty fair summation of what you get with the game.  It’s rogue-like in that every time the player dies, the environment is randomly regenerated.  And it’s a Metroidvania style game where you aquire new abilities which gradually expands your moveset and subsequently how much of the island you can explore.

There isn’t much of a story to this game at all.  You are The Prisoner, a nameless fellow who is reincarnated on an island.  He always begins life the same way – as a head rolling onto a corpse in the prison.  From there you traverse a 2D environment, fighting a variety of enemies and collecting cells which you can trade for new weapons and abilities.  Death is permanent and sends you right back to the very beginning.  Any cells you have on your persons is lost as are any weapons you’ve acquired.

Not unlike Hollow Knight, which I played earlier this year, Dead Cells takes part of its inspiration from Dark Souls and prides itself on its difficulty.  There’s a pretty steep learning curve you have to get to grips with and I can see how some players will bounce right off it.  I was pretty close.  Then on one particular run the combat mechanics began to click with me and I went on a decent run, making my way through the Promenade of the Condemned, the Ramparts and ultimately the Black Bridge where I was easily defeated by the first boss.  By that point I was hooked. 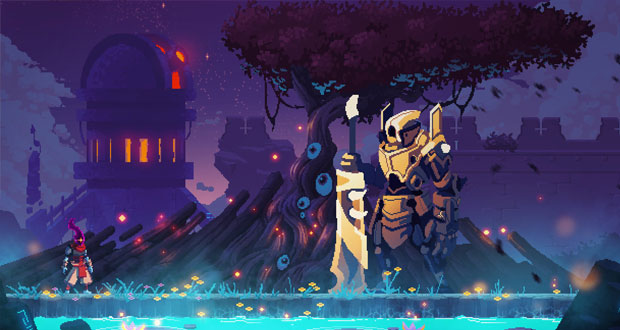 When you get your head around the combat in Dead Cells, it really becomes one of those games where you wanna give it just one more go.  It really is a joy to play.  The fighting mechanics in the game are challenging enough that any bog standard enemy can deplete your health but it is also completely fair.  Mastery of the dodge roll and a little patience goes a long way.  Once you experiment with a few of the different weapons, you will also find certain combinations of weapons can be lethal.  There is a ton of depth to the weapons in Dead Cells and there are oodles of combinations that work beautifully.  There are weapons that can freeze enemies, cause them to be bleed, emit a cloud of poision or even coat them in oil which makes them primed for a flame based attack.  In addition to melee and ranged weapons, you can also carry two grenade/trap items.

The rogue-like nature of the game means the allocation of these weapons is randomized so you are constantly learning to make the best of the items you’re dealt.

In a year that has given us nearly a dozen Metroidvania inspired titles, Dead Cells is one of the best.  But unlike Hollow Knight, it took a while for me to fully appreciate just what a marvelous game Motion Twin have crafted.  Over time I came to appreciate everything from the tight controls, the charming pixel art style, right down to the soundtrack which is well suited to a game that demands constant repetition.  It’s hard as nails, I don’t know if I will ever finish it, but I respect the hell out of what Motion Twin have created.

An immortal prisoner is stuck on an island and every time he reincarnates, his surroundings completely change.