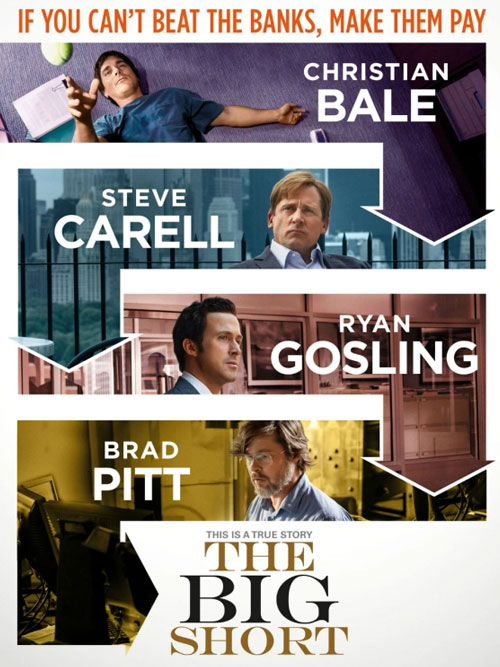 The Global Financial Crisis was triggered in large part due to the complete and utter collapse of the American housing market which was propped up by the big banks on Wall Street irresponsibly handing out housing loans to people who could not afford them.  Some examples offered up by The Big Short include a banker who brags about giving loans to immigrants who barely speak English and strangely, a stripper who owns five properties and assumes she can endlessly refinance them.

The Big Short is the story of a handful of investment bankers who became wise to this bubble and made a spectacular sum of money off of predicting the housing market collapse by literally creating a currency that did not exist before – credit default swaps.  In essence, they are bets with banks that massive cumulative mortgage repayments known as CDOs (collateralized debt organization) would fail, with incredible returns of 20 to 1.  The Too Big To Fail Banks, confident in their belief that the housing market would see endless growth despite their reckless behavior, happily took on these credit default swaps, in some instances to the tune of hundreds of millions of dollars.

The man presented as the visionary who saw through this complicated swathe of numbers and Byzantine terminology was a one eyed, heavy metal obsessed investor on the West Coast named Michael Burry.  Burry suffers from Aspergers and as such, he has both an unerring self-confidence that he has done the math when no one else predicted this calamitous collapse but he also lacks the social skills to effectively communicate his thinking.  As a result, his clients are alarmed and panicked by what they see as his wild and erratic behavior.  In 2005, Burry believed with absolute mathematical certainty that the housing market would collapse in the second quarter of 2007 with the tipping point being 14% of the mortgages failing in the CDOs.  So he goes all in on purchasing hundreds of millions of credit default swaps and then patiently waits next to his whiteboard doomsday clock, until the percentage ticks over. 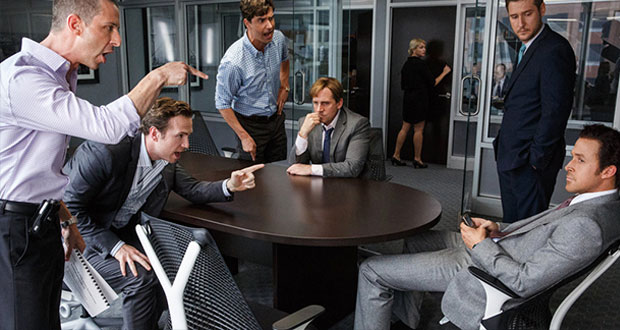 Burry is an extraordinary character but he is also too insular and introverted to carry this film.  In fact, once he crunches the numbers he mostly sits and listens to his iPod.

The surrogate for the audience to learn about the American housing market and react with utter disgust at the system built by the banks is hot headed New York investment banker Mark Baum, played by Steve Carrell.  Incredibly (and apparently truly), Baum learns of Michael Burry’s market failure prediction when a phone call dialled to the wrong number accidentally tips off his office to Burry’s idea to invest in credit default swaps.

Baum is a career banker who hates the banks.  The idea of betting so spectacularly and profiting from their greed and failure appeals greatly to him but he knows nothing of the housing market and is incredulous at Burry’s prediction.  He meets with a DudeBro investor named Jared Vennett (Ryan Gosling, in the film’s closest thing to a Wolf of Wall Street character) to explain the fragile state of the housing market to him before he decides to hit the streets and see for himself.

In Tom McCarthy’s Spotlight – a film about child abuse committed by the Catholic church in Boston – a lawyer remarks that ‘it takes a village to raise a child and it takes a village to abuse one’.  He means that such a widespread terrible occurrence could not have happened without the complicit behaviour of an entire community.  And so it is with the housing market in America.  How could the entire country become entrenched in such a blatantly unaffordable and unsustainable model of money lending?  Baum and his team meet some mortgage brokers who are obsessed with chasing bonuses and are so conditioned by the culture of the banks that they don’t care who they issue unsustainable loans to.  They meet housing market regulators such as one young woman who uses her job as an opportunity to have a holiday in Vegas and get cosy with bankers so she can get a better paying job in their industry.  They have an extraordinary meeting with a representative from the Standard and Poor credit agency who openly states that they give the banks top credit scores otherwise they’ll pursue their ratings from a competitor.  Even a Wall Street journalist who is handed the story declines to pursue it because he doesn’t want to risk losing his network of friends or jeopardize the market.  Everyone is complicit.

The last band of investors who pick up on the impending market collapse are two young bankers – Charlie Geller and Jamie Shipley.  Two men in their twenties who took $100,000 of their savings and turned it into $30 million.  When we first meet them, they are turned away from a meeting with Morgan Stanley because they are too small time.  In an otherwise cynical and depressing film, I guess Geller and Shipley represent an idealistic future of investment bankers.  They are out to make a buck sure but they manage to retain a shred of their humanity and are as befuddled as Baum when they attend a conference in Las Vegas and meet the bankers in person.

The Big Short is an entertaining and enlightening film explaining the housing market collapse in America through the lens of an eccentric band of investors who saw the whole thing coming when the bankers, Alan Greenspan, the government and everyone else missed it.  It explains some challenging and obtuse concepts through tongue-in-cheek cameos from Margot Robbie, Selena Gomez and Anthony Bourdain and is a fine companion piece to other films covering the GFC including Margin Call and Win Win (which remains one of the few films to explore the GFC from the perspective of the average person).

Summary : A sharp and smartly put together film about the housing crisis and the handful of people who saw it coming.

Previous: Bridge of Spies
Next: Brooklyn