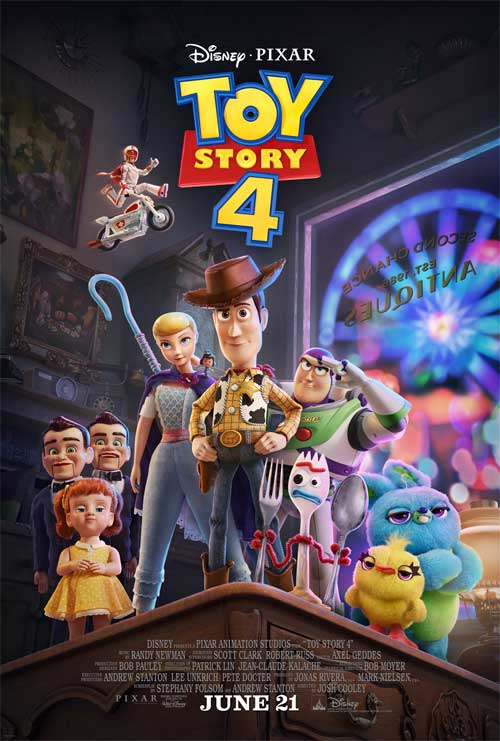 There doesn’t need to be a fourth Toy Story movie.  Does there?

That’s basically what Toy Story 4 was up against, ever since news broke of the film going into production a few years back.  Toy Story was the much loved debut Pixar film that put them on the map in 1995 and the franchise appeared to wrap up nice and tidily with Lee Unkrich’s excellent Toy Story 3 in 2010.

Personally, I was so set against the idea of this film that I steered clear of it when it arrived in cinemas, even after the positive critical reception it received (currently standing at 97% fresh on Rotten Tomatoes).

It was only over time as I read various impressions of the film and why it resonated so positively with audiences that my resolve began to wear down and curiosity got the better of me.  When the film arrived on DVD and streaming services, I decided to give it a go.

Toy Story 4 starts in very familiar territory.  Woody and the gang are now toys who belong to Bonnie.  As ever, Woody takes very seriously his role as a caretaker for kids – Andy previously, Bonnie now – and when she has a nervy start to her Kindergarten orientation, Woody (who has snuck into her school bag), helps put together some craft supplies that encourages Bonnie to make a friend for herself – Forky, a spork with googly eyes and some wiry appendages glued on.

Like Woody, Forky becomes sentient when children are not around.  Only instead of embracing his role as a helper to Bonnie, he declares himself to be trash.  Woody decides to teach Forky the responsibilities of being a toy and being there for your child.  Meanwhile the toys go on a road trip with Bonnie’s family which leads them to an antique store that houses a whole new cast of toys as well as an old friend – Bo Peep – who hasn’t been seen in Toy Story for years.  Bo now embraces life as a ‘lost toy’ who no longer belongs to any children, and her comfort with this lifestyle throws up some challenging questions for Woody to process about his purpose and the nature of his existence. 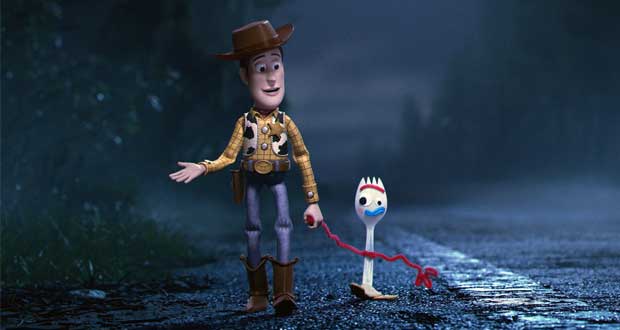 Toy Story 4 has many of the same qualities as its predecessors.  Visually, it is a high watermark in the series.  The art design has never been better and the purposefully low-fi stop-motion style animation of the toys scampering around in this otherwise photo-realistic environment is still an entertaining juxtaposition.  The screenplay is also of a high quality.  Toy Story 4‘s cheery cast of characters constantly crack jokes and one liners that have a knack for landing with both kids and adults.

So far, so good but Toy Story 1-3 did all that and wrapped up neatly.

Where Toy Story 4 stands apart from the earlier films and where it ‘earns its keep’ is in the unexpected direction it takes in the third act.  Pixar has never been shy about tackling difficult subject matter in its films, whether its Riley learning about depression in Inside Out or Karl dealing with the passing of his wife in Up.  The series has trained up to view the world through the eyes of Woody not just as the central protagonist but also the voice of reason in the film.  Toy Story 4 goes in an interesting direction when Bo actually convinces Woody that his life doesn’t need to be about endlessly putting himself out there for kids until his body falls apart.  In essence, it addresses the ‘toys being avatars for parents in the audience’ head on and becomes a film about Empty Nest Syndrome.

I was genuinely moved and swept up in the ending to Toy Story 4.  I didn’t expect such a maudlin, sentimental closure to the series but it felt just right.  Looking back, its easy to see that the character of Woody has grown and matured over the four films.  I was thirteen years old when Toy Story first came out and as a parent who is rapidly approaching forty watching Toy Story 4, I’ve aged in perfect synchronicity with the themes of each instalment in the series.

I didn’t think Toy Story 4 was needed at first.  But credit to the screen writers Stephany Fulson and Andrew Stanton.  They have crafted a tale that more than justifies its existence.  Toy Story 4 is an unexpected delight and touching ode to the final chapter of parenthood.

When a new toy called “Forky” joins Woody and the gang, a road trip alongside old and new friends reveals how big the world can be for a toy.

Summary : Toy Story 4 is far better than it has any right to be. An emotionally resonant final act makes this film soar.