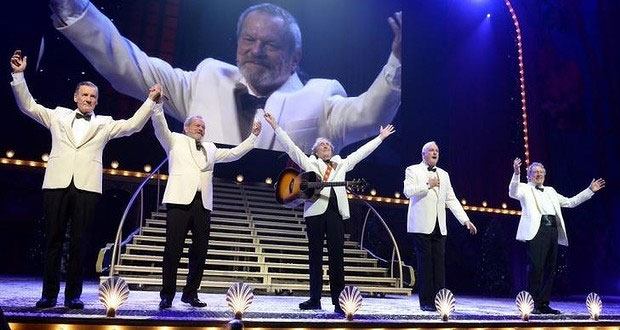 We never did get a reunion show for The Beatles but at least Monty Python were nice enough to give their fans one last hurrah before calling it a day.  Performed at the O2 Arena and billed with the morbid title of Monty Python (Mostly) Live – One Down, Five To Go, this final show for the legendary comedy troupe was telecast around the world to five different continents.  Cleese, Palin, Gilliam, Jones and Idle all getting back together for one stage spectacular.  They even brought back Carol Cleveland!

So how was it?

It was an entertaining spectacle, made special because it was a little rough around the edges.  It was always going to be that way, what with all the Pythons pushing north of seventy.  The Monty Python sketches are so well known and so ingrained in my mind, both the televised versions and Live At The Hollywood Bowl, that it was a weird and exhilarating thrill seeing the classics being performed and noticing small change ups in the delivery.  Some differences were done on purpose – they threw in a gag about Cleese’s many failed marriages.  Some were unintentional –  Jones and Cleese both flubbed a lot of their lines.  And some were the ravages of time catching up to them.  It’s hard to perform the Argument sketch with the same energy and gusto or rattle off a hundred variants of cheeses when you’re getting on in your years.  Regardless, it was a lot of fun seeing these legendary sketches being performed by the cast and having such fun with it.  The humanizing touches – like when Cleese and Gilliam started corpsing during the Sweet Shop sketch – made it feel special.

Credit must go to whoever choreographed the whole event.  The show did a great job with its pacing and presentation, blending the various sketches with musical numbers that sourced material from not just the tv show but from all the well loved Python films as well.  All the classics were covered of course (Dead Parrot, Cheese Shop, Spam) but even a couple of my personal favourites made the cut (the Batley Townswomen’s Guild recreate Pearl Harbour!).  Of all the performers on the stage, it was definitely Idle and Palin who were the most spritely, seemingly able to roll back the years and belt out their songs and sketches with an energy that belied their age.  Gilliam, Cleese and Jones looked a little worse for wear but I appreciated what they were able to do all the same.

Monty Python (Mostly Live) is a great two hour show that is made into a bloated three hour production thanks to the fumbling presentation by television channel Gold, who secured the rights to air it.  There is a completely needless pre-show and a half time telecast involving Dara O’Briain interviewing famous comedians taking turns fawning over the Pythons.  These segments seem poorly planned and added nothing to the show.  Worse still, the first half of the performance is frequently censored for its language and content because it was aired during prime time.  I cannot believe that Gold hadn’t accounted for this when planning their broadcast.  Hopefully, a home video cut of the show can clean up the iffy presentation and strip out the superfluous content because there really is quite a lot of it.

It’s still not enough to spoil what is a feel good send off for Python fans.  The Pythons are never ones to play on sentimentality.  I recall a previous live show in which they ‘accidentally’ knocked over Graham Chapman’s ashes all over the stage.  This time however, I think its impossible for fans not to feel a little tug on the heart strings as they watch these legendary comedians, in the twilight of their lives, busting out the classics one last time.  Farewell Pythons.  So long and thanks for all the memories. 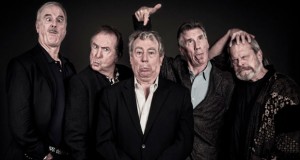