There was a themed ‘Rivalry Round’ for the Hyundai A-League this week that saw all the league’s local derby sides pitted against one another.

NOT REALLY A DERBY – Sydney FC vs Adelaide United

Two points of interest about that last game.  Is Perth vs Wellington the biggest geographical distance between two teams in a domestic competition?  It must be pretty damn close.  Secondly, who the hell thought it would be a good idea to have Welllington play a game at the same time the All Blacks were playing a Rugby World Cup Final?  I would love to know the number of people in New Zealand who saw that Phoenix game.

I’ve been disappointed with the turnout for the Brisbane Roar’s two home games so far.  Both crowds have been around the 13,000-15,000 mark.  Given that the club is playing some of their best football ever, scoring plenty of goals, are on a 30 game unbeaten streak and played a memorable grand final just six months ago I find that number to be pretty rubbish.  What can they do to draw a bigger audience?  It remains a challenge for the club, their new Indonesian owners The Bakrie Group and the FFA.  A derby game between two Queensland rivals who have a history of entertaining and high scoring games should draw a much better crowd than this.

It terms of the overall crowd numbers, the A-League has had a solid start this season.  Kewell and Emmerton keep drawing decent crowds and the competition broke its record for the highest single round attendance this week.  87,508 fans, an average of 17,000 per game.  So far, the decision to move the season away from the NRL, Super Rugby and AFL seems to be the right one.

Melbourne Victory played out their second scoreless draw of the season in their local derby.  The game ended with a press conference where a 22 year old defender labelled their performance ‘a disgrace’ and the manager apologised to supporters who attended the match.  They remain goalless for the season after 360 minutes of football and rarely looked like breaking those shackles against the bottom club in the competition.  They clearly have the talent but what can they do to make it gel?  There is a real sense that all is not well in the locker room at the moment.

It’s only the third round of the competition but only Brisbane Roar and Perth Glory have managed to maintain a consistent run of form.  Adelaide United looked impressive last week in their win over Melbourne Victory but were ordinary this week against Sydney FC.  They were lucky to go a goal up but they ended up blowing that lead anyway.  Anyone who follows my Twitter account will know that I think they have a significant weak link in their line up – Andy Slory – a Dutchman who previously played for Feyenoord.  The credentials are solid but I think he has been woeful for the Reds ever since he joined last season.  He throws away possession like a hot potato and he squandered a can’t miss goal during this game.  Unfortunately, I don’t see the club having the balls to bench him for his poor play.

Wellington Phoenix had a promising start to the season but they keep losing players to injuries or red cards.  That didn’t really improve this round with Manny Muscat getting sent off in their loss to Perth.  Newcastle have shown signs of promising form but remain manager-less.  Central Coast Mariners, finalists last season, are yet to record a victory this season.

It’s too early to say but it is Brisbane and Perth who are looking the goods at the moment.  Brisbane with their high-tempo teamwork and Perth Glory with Shane Smeltz who scores a million goals a season. 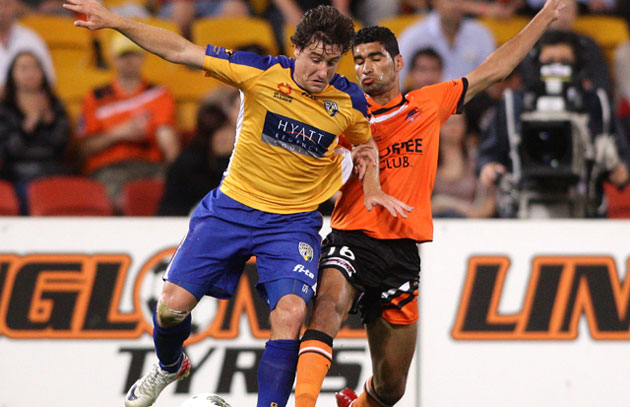 The Queensland Derby match in Round 3 saw the in-form Brisbane Roar meet Gold Coast United who have had a mixed start to the season.  Former Roar coach Miron Bleiberg talked up this match as ‘one to remember’ and claimed his side would be the ones to halt the unbeaten streak.  History was certainly on their side.  The Roar have only beaten Gold Coast once in six previous clashes.

The game followed a similar pattern to the match last week against Sydney.  The Roar took the lead in the game early on thanks to a header from the ever-reliable Erik Paartalu in the fifteenth minute.  However once the game reached the half hour mark, Gold Coast turned up the pressure and maintained a sustained attack on the Roar for the rest of the opening half.  Brisbane kept their cool however and weathered the storm without conceding their first goal of the season.  In the second half, Brisbane’s class began to shine through.  Despite playmaker Thomas Broiche being relatively quiet in the game, Mitch Nichols, Ivan Franjic and Erik Paartalu all contributed towards wrestling back control of the game.  Paartalu in particular was the work horse – he made exactly 100 passes in this game and was successful with 96 of them.  Given Holga Osick’s openness to using A-League players, you wonder how long it will be before we see Paartalu joins his former teammate Matt McKay in getting called up to represent his country.

The pressure in the second half eventually lead to a breakthrough when substitute Massimo Murdocca linked up with Albanian Besart Barisha who found the net for the second consecutive game.  A third goal from Mitch Nichols sealed the game and continued the Roar’s fine start to the season.  1-0.  2-0.  And now 3-0.  The new players have settled in nicely.  They haven’t conceded a single goal.  And the streak stretches to 31 games.

Next up – a Friday night home fixture against Adelaide United.  Are they the team to end the streak? 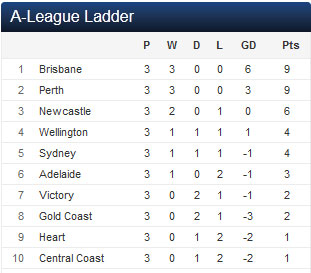