C.M Punk – Best In The World 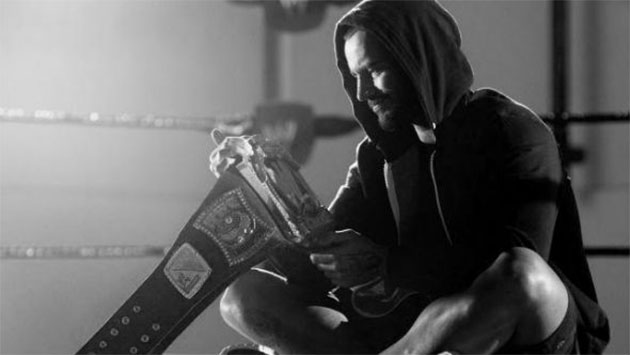 In the professional wrestling industry, it is not uncommon for the story behind the scenes to be much more interesting and over the top than the melodrama that plays out in front of it.  Whether it be the hubris shown by those in power during WCW’s multi-million dollar rise and fall, the bitter twelve year tale of betrayal and redemption between Shawn Michaels and Bret Hart, or the tragic end to the life of Chris Benoit.

C.M Punk Best In the World is one of the most enjoyable documentaries that the company has produced because it focuses on a unique talent who doesn’t fit the mold of what the company would view as a headline performer and it completely eschews kayfabe meaning that the curtain is pulled back and the story is as much about the politics behind the scenes as well as the matches put on in front of the crowd.

Phil Brooks, better known to the world as C.M Punk, is a performer whose career I’ve been following since he made a name for himself in the independent wrestling circuit in the mid 2000s, wrestling for Ring of Honor.  Punk stood out as a performer for me because he was a hundred times more relatable than your run-of-the-mill musclehead.  He is roughly the same age as me, had a normal physique and he grew up playing video games and listening to punk music from the early Nineties.  Looking at the photos of him growing up with terrible haircut and bleach blonde dyejob, he looks like he could’ve been the guitarist in my teenage rock band.  Culturally, it was easy to see why he was so readily identifiable to a lot of fans.

Not only was Punk a relatable and naturally charismatic performer, what put him on the map to stardom was his work ethic and willingness to learn.  Early in the documentary we see that he and some buddies put together a backyard indy federation and they eventually end up drawing almost a thousand people to their shows (!).  Considering that this endeavour was run during the early 2000s and predates social networking, I find this to be a formidable accomplishment.

After deciding to attend an accredited wrestling school and formally learn his craft, Punk begins putting on matches with Chris Hero and they work the Mid-West wrestling circuit, establishing themselves in the booming mid-2000s indy wrestling market.  From the clips of their matches, it looks like their matches had all the hallmarks of an indy spotfest where they move from one high impact move to another.  “I thought I was good,” remarks Punk, “…until I wrestled Eddie Guererro.  Then I thought I was terrible.”

Its easy to forget that Punk had an opportunity to work with both wrestling legends Eddie Guerrerro and Rey Mysterio in 2002 before either signed with WWE.  It was clear that Punk took on board the lessons on how to work a longer match as he shifted his style to better incorporate storytelling, ring psychology and a more deliberate pace.  Nowhere is this better showcased than in his trilogy of matches with Samoa Joe in 2004 which included two one hour time limit draws.  They remain some of the best matches I’ve ever seen.

After getting an idea of Punk’s upbringing both personally and professionally, the documentary shifts into covering his career at WWE.  Up to this point, this documentary had already been a breath of fresh air as it was willing to show footage from other companies and incorporated interview footage from unlikely sources such as Lars Frederiksen of Rancid and indy workers from Ring of Honor.  But nowhere is Punk’s tight handle on the editorial content of this production more evident than in the next hour which covers his time at WWE.  The brutal honesty of what follows is eyebrow raising.

When Punk signs for WWE, the first thing that happens is that he is sent to OVW, their development school where he is supposed to ‘learn how to work.’  By this stage, Punk is a wrestler with nearly a decade of experience under his belt.  Although unhappy with the decision, Punk works diligently in the promotion and wins over the support of the head booker at OVW, Paul Heyman.

Heyman recognizes the talent that Punk has and puts him over as champion.  Punk puts on some decent matches and appears ready to be put on television.  Heyman puts in a recommendation to Michael Hayes who is responsible for talent relations and booking on Smackdown.

We see an interview with Hayes where he rather bluntly states that he purposefully ignored Heyman because he didn’t value his opinion.  That remark explains so much of why the WWE has languished in the last decade and has struggled with undercutting their most talented performers.  How the hell can it be acceptable for a talent recruiter to ignore a recommendation from the company’s own developmental program because of a petty personal issue?  Hayes doesn’t even say whether he bothered to watch any of Punk’s work.  He just doesn’t like Heyman so thats that.  Why even bother having a developmental program at all?  To make this admission on record when he is still in that role is extraordinary.  A talent recruiter who openly admits to letting a personal dislike of a third party influence his decision making.  Wonderful.

That literally would have been the beginning and end of Punk’s time in WWE were it not for the fact that Paul Heyman gets handed the reigns for the short-lived ECW tv show revival.  With nothing to lose, Heyman puts Punk on tv who immediately gets over with the crowd.  Heyman makes him the star of the promotion and many of the backstage politicians are forced to eat their words as Punk gets over with the crowd, notably drawing the attention of the Madison Square Garden crowd when his named is cheered at the expense of his teammates Triple H, Shawn Michaels and Jeff Hardy.  Punk is a star and he is ready for the big time.

Punk spends a couple of years languishing in ECW where he frankly states his success and screen time is directly proportional to Paul Heyman’s relationship with the bosses at the time.  After an aimless few years, suddenly a decision is made to put him over at Wrestlemania by winning the Money In The Bank match, putting him in line for a world title match.  Punk wins when he cashes in on Edge and proceeds to have a six month reign where he has some decent matches.  Then, he gets the legs cut out from under him, losing the title by being attacked backstage at the pay-per-view Unforgiven, where he has the ignominy of not even working a match.  He is back to being an after thought.

Once again Punk spends a few months with no direction and he seems almost accepting of the fact that he has run his course in the company.  Then, once more, with no build up, he is put over at Wrestlemania again and this time works a successful program with Jeff Hardy where Punk turns heel for the first time and debuts his arrogant straight edge persona in the company.

Yet again, all the momentum from Punk’s feud with Hardy is squandered when he goes on a losing streak for six months after, being on the wrong end of a lopsided feud against The Undertaker and Randy Orton, two well established stars that gained nothing from going over Punk.

Whats apparent this whole time is that there is no long term planning in the company and that the people responsible for talent recruitment and scripting can perform their jobs terribly with seemingly no repercussions.  Even when a chance is taken on a new performer like Punk, little consideration is given as to how well they did and whether they had a good match or even more calculated business decisions like how well their pay-per-view sold or how much merchandise they sold.  After working a successful program with Jeff Hardy where Punk got over as a major heel, he is told ‘creative have nothing for you.’  And the implication is that this is a failing of the wrestler and not the creative team.  It’s insane.

The company seems to just make things up as they go along and they create self-fulfilling prophecies to justify their actions.  “Guess what, you didn’t get over in your feud losing three times to Randy Orton so we’re sending you back to the mid-card to spend time in the tag team division.”  Which is exactly what happens to Punk who spends the next eighteen months in one aimless program after another, with little career traction.

Finally, Punk decides to leave the company and inexplicably, two weeks before his contract is due to expire, he is given an open mic to ‘address his grievances.’  Punk goes on to cut his famous ‘pipe bomb’ promo where he lambasts the company’s backstage politicians and the rest is history.  Punk is put over at the next pay-per-view in a great main event with John Cena and after a brief hiccup feuding with Triple H and Kevin Nash, he is given the title belt and has gone on a championship reign that is over 300 days long and counting.

To be completely frank, a lot of the complaints that Punk raises are still there.  John Cena, in the exact same character that he has been for last seven years, is still the star of the show, champion or not.  The company still seems largely directionless and only seriously pushing a handful of performers.  But today Punk is definitely one of those top tier performers.  And as he has matured into becoming a backstage leader in the locker room, his influence will likely be felt many years after he retires.  In the current WWE roster, there are many more Ring of Honor and indy graduates including Bryan Danielson (Daniel Bryan in WWE), Chris Hero (Kassius Ohno in WWE), Tyler Black (Seth Rollins in WWE) and Claudio Castignolli (Antonion Cesaro).  All these wrestlers have incredible talent and the ability to get over as major stars.  In 2012, Daniel Bryan has ascended to a stage where he has filled the role of Kurt Angle from ten years ago.  He is a versatile performer, can work a great match with anyone and hugely over with the crowd.

One of the best insights that C.M Punk Best In The World has to offer is what motivates Punk today.  Now that he’s won the world title, main evented Wrestlemania and had a meaningful 300+ day title reign, whats left to accomplish?  The answer, it seems, is to change the culture backstage at the company.  To make sure that wrestling talent that don’t have the political clout can still get over.  To get rid of the ‘glad-handing Vince McMahon yes-men’ who get in the way.

This is an excellent documentary that WWE and C.M Punk have created.  It is made with obvious care and direct input from Punk and offers a terrific overview of his rather unlikely career.  Few people, myself included, gave him a chance at getting over when he signed for WWE in 2005.  It’s incredible to see how far he’s come.

If there’s one last milestone I’d like to see Punk accomplish, it’s to wrestle the closing match at a Wrestlemania in a marquee match with Stone Cold Steve Austin.  Come on, Vince.  Make it happen.