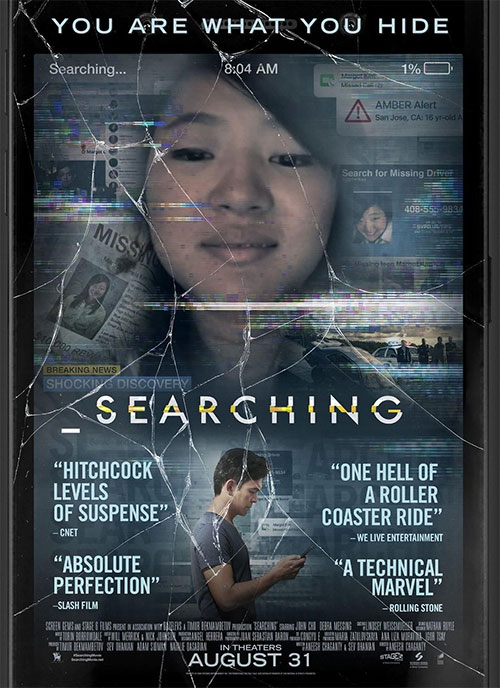 I love a good movie gimmick.

It fascinates me when a film crew set themselves up with an interesting challenge – like shooting a film in a single take (Russian Ark, Rope), on a mobile phone (Unsane) or maybe in first person perspective (Hardcore Henry, Dark Passage) – and seeing how well they can execute on that idea.

Searching has a very novel and contemporary hook that immediately caught my attention.  It tells the story of a father searching for their missing daughter, only the film is shot entirely from a screen recording of the father’s computer.

How on earth would this work?  Well its a clever blend of Google search engine results, Face Time video conferencing, instant messaging, Facebook, Gmail and Google Maps.  What I appreciated about Searching is that it uses genuine applications instead of inventing its own and it plays to the rules.  In searching for his daughter Margot, David Kim (John Cho) uses these apps exactly as they would work in the real world.  There’s no “movie magic” involved to makes these devices extra helpful.  They have the same benefits and limitations you and I would have if we used them to search for a missing person. 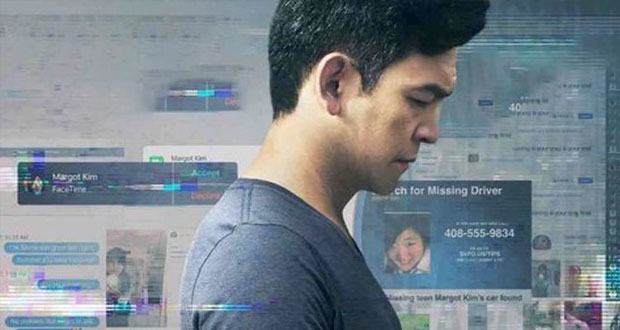 The film manages an impressive feat of feeling both incredibly cutting edge and old fashioned at the same time.  Cutting edge because the idea of your child disappearing in this digital age and using smart phone and computer technology to look for them seems eerily plausible.  Old fashioned because once the mystery begins to unfold, Chaganty fakes out the viewer with some well placed red herrings and plot twists that would make Alfred Hitchcock proud.

John Cho is a criminally under appreciated actor and whilst this film’s use of grainy, low frame rate webcams is never going to be the best showcase of Cho’s acting, he is utterly convincing in playing his role and I was completely invested in his search.  I also thought Debra Messing was excellent as the police investigator and didn’t even recognize her until I saw her name in the end credits.

Searching is an original concept that I’ve not seen attempted before.  It’s one of the most creative uses of smart phone and computer technology to tell a story that I’ve ever seen in a film.  It’s definitely worth taking the time to check it out.

After his 16-year-old daughter goes missing, a desperate father breaks into her laptop to look for clues to find her.

Summary : One of the most creative and enjoyable thrillers I've seen in years thanks to the unusual gimmick and John Cho's fine performance