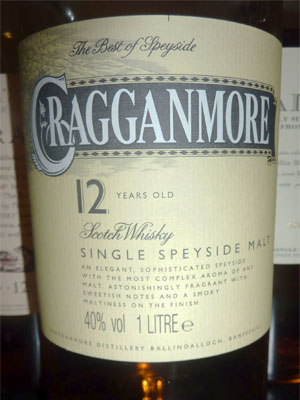 PALATE Quite crisp, hint of vanilla, bit of smoke and spicyness to it

NOTES This one surprised me a little.  The only other time I had Cragganmore was about three years ago and I remember finding the taste alright but a tad unremarkable.  I quite enjoyed revisiting it this time around as I think I have a better grasp of its more delicate notes.  The 12 year old has quite an unusual blend of flavours and sensations – it’s subtle, sometimes sweet, sometimes smokey.  The late whisky critic Michael Jackson described its aroma as ‘the most complex of any single malt.’  It’s one of the most widely available and well regarded of the Speyside whiskys and rightly so.

Previous: I am a sleepy drunk
Next: Youtube Friday: Def Leppard on Jay Leno