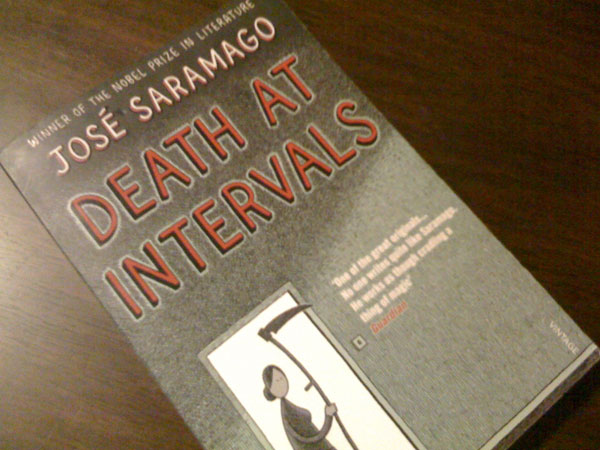 I’ve just finished reading Jose Saramago’s Death At Intervals.  I don’t really know what to make of it.  It’s about the strangest thing I’ve read all year and thats including a book that has KFC’s Colonel Sanders appearing as a pimp in Japan.

So in Death At Intervals, an unnamed country discovers the complete absense of death one New Years Day.  Not only does no one pass away from natural causes, the ability to die appears to have ceased period.  So unfortunately, for people on their deathbed or those who are terminally ill, they too remain alive.  Overall though, the country initally reacts with jubilation to the news that death is a thing of the past.  Unfortunately, those in the undertaking business and religious leaders react less favourably.  After all, why bother with church if you can’t actually get to heaven?

After a period of seven months (and about half the book) Death eventually returns to the unnamed city.  Then Death decides to leave memos for people giving them a week’s notice of their impending death.  Then Death takes on the physical form of a woman and starts spelling her name with a lowercase ‘d’.  Then she becomes infatuated with and eventually falls in love with a musician who was given the week’s notice memo but doesn’t die.

This book is one of the weirdest I’ve read in a while.  The tone at the start is comparable to Blindness but then its as if two thirds of the way through, Saramago decides he can’t really be stuffed to keep writing the story but then catches Nicolas Cage on the television in City of Angels and then decides ‘thats a sweet idea’ and goes off on that tangent.

Seriously, what the hell?