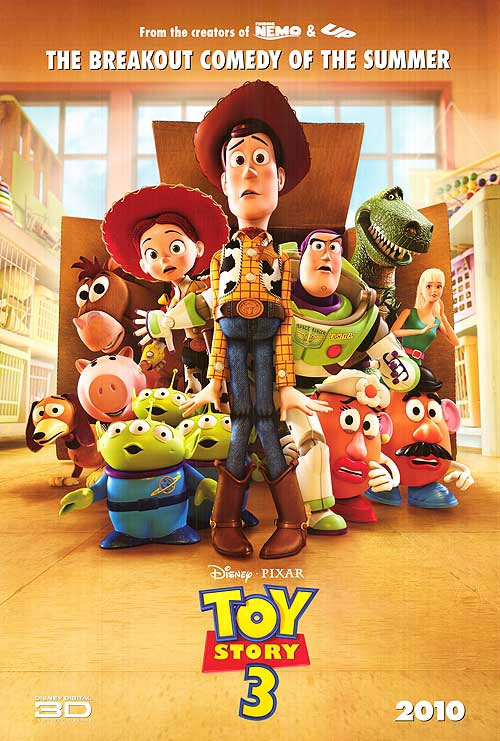 Toy Story 3 belongs to that rare breed of cinematic trilogies: it’s quality increases with each installment.

Toy Story 3 provides a fitting end to a tale that began all the way back in 1995 when Pixar made the first ever 100% digitally animated film.  While managing to stay true to the characters and exhuberant tone of the previous films, Toy Story 3 is also a great showcase for how far Pixar has come with their visual fidelity and their finesse for crafting a tale that can tug at the heartstrings.

The story begins with the toys having reached a stage in life they were dreading in Toy Story 2.  Their owner Andy has now grown up into a young man and is preparing to move out of home to go to college.  This means the toys face one of three different fates: be put away in storage up in the family attic, be thrown away with the garbage or be donated to a day care centre.  Andy is a Generation Y kid and probably has that same inner man-child gene that I do so he opts to hoard them in his attic.  Unfortunately for him, his mother mistakenly throws away the toys.  While they manage to avoid the garbage truck, they are now miffed that Andy has abandoned them and decide to hide in a box that will take them away to a day care centre.

When the toys arrive at the day care centre, they are greated by a whole host of new friends and what seems to be a paradise for second hand and abandoned toys.  Unfortunately for them, they quickly learn that the toddlers in the centre are too young and therefore play very roughly with them.  After a single play session, they are broken and covered in paint, glue and boogers.  Worst still, the day care centre is also run like a prison at night and is operated by the Machiavellian Lotso Huggin’ Bear.

So unfolds a wonderful homage to The Great Escape as the toys attempt to bust out of the day care and make it back to Andy’s home before he leaves for college.

There is plenty to like about this film.  I’m writing this not longer after watching it so there are still plenty of different scenes and details floating about in my head.  I’m not entirely sure how coherent this will be. 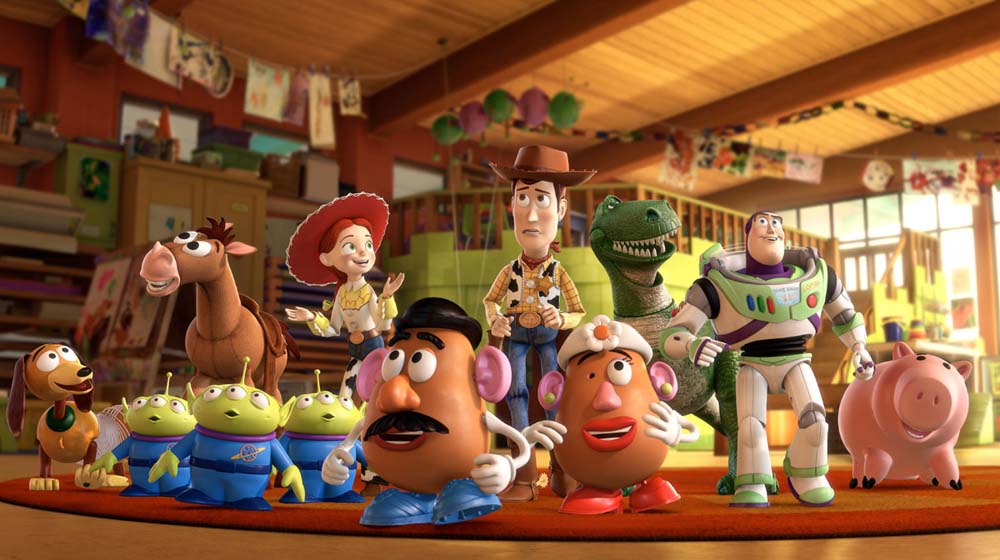 Firstly, I love the world that the Toy Story characters exist in.  Not unlike the comic strip Calvin and Hobbes, its a blend of make-believe and the real world.  Buzz, Woody and the others all have their own personalities when they come to life, some sharing the same traits as their appearance, others being diametrically juxtaposed.  However they all obey the same ‘law’ where they become inanimate when humans are around.  Happily, there is never any attempt to explain this.  There is a trust from the creators that the audience understands this concept implicitly.

Immersing yourself then in this world where the toys lead a secret double life allows for some beautifully surreal situations and Pixar pushes this boundary further in Toy Story 3 than in previous installments.  I love that Mr Potato Head can loses his plastic potato body and compensate by attaching his facial features and limbs onto a pickle.  Or that the day care centre is guarded by The Monkey from the Stephen King horror short story.  And that there is a scene in which some toys hold hands and prepare for the sweet embrace of death and somehow Pixar manages to make this work.

While Toy Story 3 shares the warmth and quality associated commonly associated with Pixar as a whole, it also shares the more melancholic tone their last three films have taken (with Wall-E and Up preceeding this).  Its not escaped my notice that when I started purchasing the back catalogue of Pixar films on Blu Ray, a couple of them now include eulogies for colleagues who have passed away.  As Pixar has matured as a company and grown with each film they have released, I feel some of their more recent works also reflect the fact that they too are aging and maturing as individuals and this is what has lead to the introduction of themes about coping with loss, moving on and growing up.  The introduction of these more challenging concepts however is done with a deft hand and Pixar still manage to interweave these through what is otherwise an entertaining and generally light hearted film still suitable for children.

Toy Story 3 is a fond farewell to cast of Pixar’s first full length feature.  It certainly does the series justice and while time will tell, I get the feeling it will also be looked back on as one of the best works in a rather formidable catalogue of quality films.

Can lead to tears and seperation anxiety

Summary : An improbably great send off for the animated film series that started it all for Pixar. One of their best films to date.