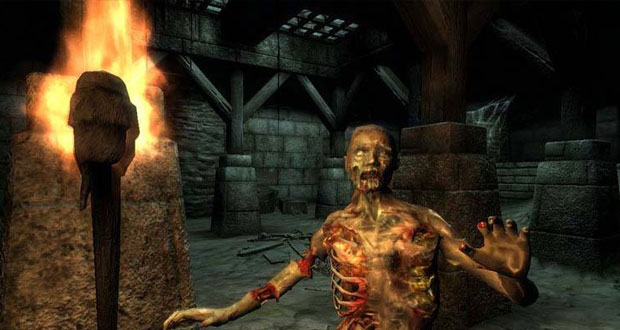 Elder Scrolls IV: Oblivion stands alone as the best single player game to own on the Xbox 360 and I don’t expect it to have that mantle taken away from it for quite some time.  The game is something of a godsend for Microsoft because not only is it a good game but its one that will take a long time to finish.  So while the release date looks a little threadbare over the next few months for Microsoft (Xbox 360 May release schedule in Australia: Ping Pong from Rockstar), Oblivion will still be there to tide 360 owners over.

Oblivion, the fourth title in Bethesda’s Elder Scrolls series is set in the fantasy world of Tamriel.  There is unrest across the land as strange ‘Oblivion gates’ are opening everywhere, with demonic minions called Daedra entering from a hellish realm into the world of Tamriel and killing everyone.  It’s sort of like what Shang Tsung’s been trying to do all these years in Mortal Kombat.

In the Imperial City, a prisoner is given a surprise visit by Uriel Septim (voiced by Patrick Stewart), the emperor of Tamriel who has foreseen his own death.  The prisoner, played by the game player, follows Septim through the sewers to a secret passage out of the city.  Unfortunately for Septim, he has been betrayed and is killed by an assasin.  From here, the prisoner is given a ring and is asked to find a man in Tamriel who doesn’t know it, but is the sole heir to the throne (voiced by Sean Bean).

The moment where most people begin to understand what Oblivion is about is when they first leave the sewers.  The sewers, while graphically passable, are dark and claustrophobic.  Outside, Tamriel is a vast living world, ready to be explored.

Graphically, the game is top shelf.  Rolling vistas, gorgeous old chapels, dynamic day/night cycles…it’s breathtaking stuff.  See a mountain in the distance?  You can climb it.  Want to stray from the main quest and spend some time as a thief?  You can do that too.  The realisation when you first step out of the sewers is that this is a world where you can do just about whatever you like and in front of you is a giant playground.

The game drew two comparisons in my mind.  Firstly, it is like Grand Theft Auto with its sandbox gameplay (and stuttering framerate).  It’s also like The Lord of the Rings films because Bethesda have made a game that is so much more accessible than their previous titles that even people normally with an aversion to 60 hour fantasy role playing games can get something out of this title because its nice to look and easy to play.

Bethesda had a lot they had to get right with such a diverse gameplay palette and they do a good job.  While you can spend time with petty thievery or meddling in magic and alchemy, the real meat of the side quests comes from joining guilds which let you develop your abilities and also give you missions and quests.  Even better, Bethesda have put a lot of effort into making these missions varied and interesting.

An example from the first Fighters Guild quest:  You are assigned to help a lady with a ‘rat’ problem.  When you arrive at the lady’s house, you discover her pet rats are being attacked by a mountain lion which has managed to get into her house.  Upon killing the mountain lion, the rat lady tells you that she suspects her neighbour.  When you follow the neighbour you discover she has been leaving spoiled meat at night in the rat lady’s yard, hoping to lure out the rats.  Instead it has been luring in wild mountain lions.  The neighbour confesses to you that she left the meat because she hates the rats but swears she never intended to attract mountain lions.  Here the player has a choice to make of whether to dob in the neighbour or not.  A lesser game would’ve had you levelling up by fighting a bunch of rats.

The main quest isn’t the most innovative as far as fantasy storylines go but it unfolds in a fashion similar to the TV show 24 so as soon as you wrap up one loose end there is something else that immediately draws your attention so there is a strong sense of progression and it keeps the story engaging.

The variety of quests and events is astounding.  Over the course of the game, you’ll find an entire village of people that have disappeared mysteriously, you can turn into a vampire, go Gladiator-style and fight in an arena for money, come across the village bicycle hanging out at the docks and more.

I compared Oblivion to GTA earlier and one of the things they have done to give the game more character over that game is to actually give the NPCs something called “Radiant A.I” which means they will have their own agenda and go about their day independantly, doing things like eating, drinking, sleeping and socialising unlike the GTA NPCs who just wander around aimlessly.

This behaviour in the NPCs mean you’ll see some cool, surprising and unscripted gaming moments.  I’ve read an anecdote of a player giving a woman a poisonous apple only for a pickpocket to steal it.  When a guard chased down the pickpocket, he took the apple and ate it and died.

This freelance nature also means that sometimes NPCs involved in minor quests actually DIE before a player gets to them, when they’re killed on the road by goblins or the like.  It also makes for some unintentionally hilarious dialogue such as:

Man (panicked) – Have you heard about these Oblivion gates opening around the city.  Daedra are coming out and we will all be doomed!
Elf  (happy) – Sure!
Man – Good day
Elf – Good night

Man – Have you heard of the hero of Kvatch?  They say he saved the city from daedra
Woman – Sure I have…
Man – STOP TALKING!!!

Part of what makes Oblivion a great game though is the sense of humour both intentional and otherwise.  You’ll find NPCs cheating on their partners, stupid soliders accidentally firing arrows into their own party and a lizard man who talks about eating babies.  It adds to the charm of the game and is a refreshing change from regular po-faced fantasy titles (or videogame titles in general, really).

A game this size is guarenteed to have flaws and Oblivion is no different.  The frame chugs hard during certain scenes and fans of the older games may well be disappointed at how Oblivion has been simplified to bring in a broader audience.  But these are only slight knocks against an otherwise excellent game and the best reason right now to own an Xbox 360.

Summary : An ambitious, sprawling RPG that showcases the power of the Xbox 360. The radiant AI is amazing and only hints at the type of gameplay experiences we can expect this generation

Previous: Kameo: Elements of Power
Next: Shadow of the Colossus