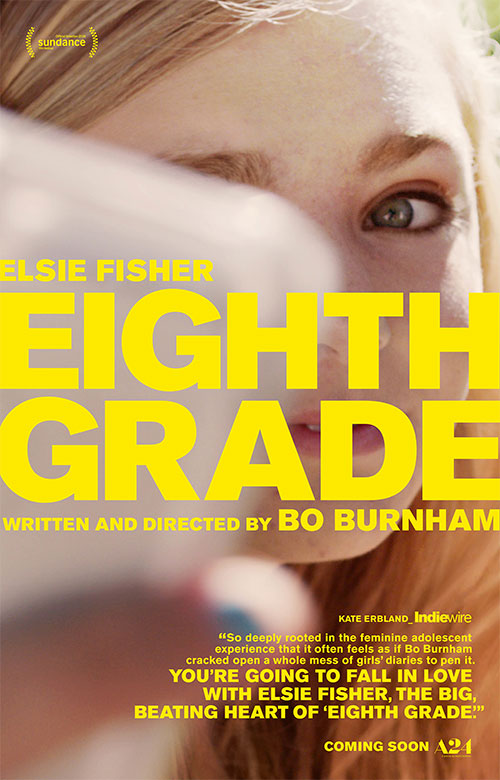 Apparently, if you ask a group of kids today what they’d most like to be when they grow up, one of the most popular answers you’ll hear is “Youtube Personality”.

Now, there wasn’t anything like that (or any social media at all) when I was in Middle School but regardless, I found Bo Burnham’s debut feature Eighth Grade to be a touching, sincere and achingly relatable film about the anxieties and pressures of adolescence.

The film is a modest and small scale production.  It’s a Slice of Life feature about a soft spoken kid who attends a public school in New York.  The film manages a juggling act where it explores some concepts that feel pretty contemporary – Youtube Tutorials, smart phones in schools, Facebook invites for birthday parties, mental health awareness – but its couched with some behavior by the kids that feel pretty universal and timeless to me, like games of Truth or Dare and a boy trying to impress a girl at a pool party by doing a handstand underwater. 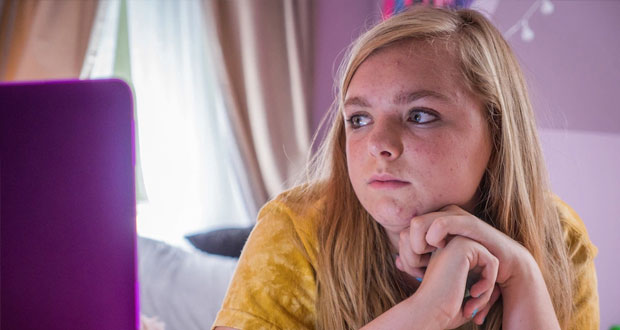 Elsie Fisher plays Kayla, the kid at the centre of the story.  Kayla hosts her own vlog on Youtube where she gives friendly advice to other kids about how to make friends, handle peer pressure and so on.  The sad irony is that these videos get almost no views and in reality, she is too timid to take her own advice.  She is hopelessly anonymous in her school and even wins ‘Most Quiet’ in her class yearbook.

Eighth Grade is a rather nuanced Coming of Age film so there isn’t any profound development that suddenly makes Kayla the coolest kid in class or have a radical transformation in her personality.  It’s not Clueless or Ten Things I Hate About You.  It’s protagonist doesn’t even have the quirky indie film mannerisms of a Napoleon Dynamite or Ladybird.  I’m not actually sure I’ve seen a portrayal of a high school kid like this in a film before.  Maybe that’s why I found Eighth Grade so interesting.  It’s a movie that’s coloured with lots of clever observations and remembers little details about being a teenager that will have you reflecting on your own experiences after the credits roll.

Elsie Fisher turns in an impressive performance as Kayla.  Her mannerisms that convey her insecurities and anxieties are spot on.  The hunched shoulders.  The avoidance of eye contact.  Her soft spoken speech.  It all rings true.  You really feel for her when she has her small wins (plucking up the courage to sing karaoke) and its heartbreaking when she is put in a difficult position in the film’s third act.

The rest of the cast in Eighth Grade are terrific too.  Kayla has a particularly touching relationship with her dad Mark (Josh Hamilton) who means well, tries his best but is unsure how to break the barrier between himself and his daughter as her attention is usually locked onto her smartphone.

Eighth Grade is a bittersweet film of real quality.  A lot of the time its characters are either unhappy, unsure of themselves or both.  There’s plenty of humour in the film but a lot of it is rooted in sadness, like Charlie Brown never kicking the football or having the nerve to talk to the Red Haired Girl.  Kayla is maybe the best cinematic portrayal I’ve seen of a Generation Z kid, trying to fumble their way through the challenges of modern life.  Without doubt its one of my favourite films of the year.

An introverted teenage girl tries to survive the last week of her disastrous eighth grade year before leaving to start high school.

Previous: Netball and Me
Next: Three Identical Strangers