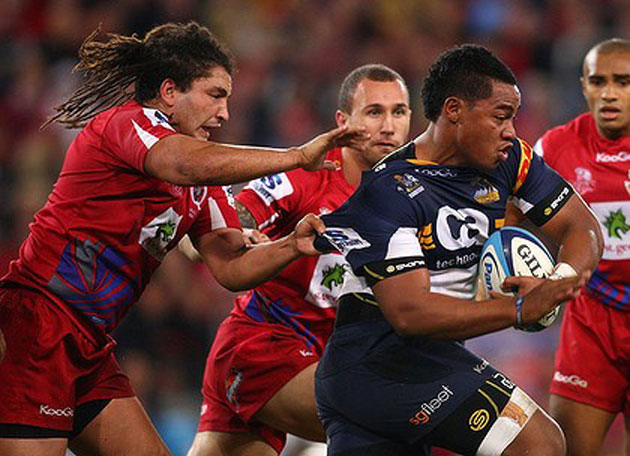 After enduring a tough sequence of games against the competition’s best teams such as the Blues, Crusaders and the Stormers, it was a bit of welcome relief to have a home fixture against the out of form Brumbies.  The once mighty Brumbies, the only Australian team to actually win a Super Rugby competition, have been out of form this season and languished in 13th place on the ladder.  They looked to be easybeats leading into the business end of the competition.  This was also the final home game for the Reds in the regular season.  Two away games remain and then we commence Finals Football.

Unfortunately, the Rugby Gods weren’t smiling on us this day.  The referee was incredibly whistle happy, seemingly unaware or maybe unwilling to let either side play advantage.  The whistle felt like it was blowing every minute.  A quick check on the match stats suggests it wasn’t far off.  Instead of being a game of free flowing rugby which suits the Reds, it turned into a penalty fest with both sides exchanging 3 pointers.  Eventually the Brumbies got their noses in front 9-6 and then cemented the lead with a well worked passage of play that resulted in Wallabie hooker Stephen Moore crossing for a try under the posts.  The Reds clawed one back of their own just before halftime but went into the sheds being ten points down.

The second half didn’t see the game improve by any measure.  The whistle kept blowing and the Reds looked ordinary in attack as the Brumbies rushing defence ensured they didn’t get much forward momentum.  Worse, Digby Ioane was carted off the field suffering from a concussion, Ben Lucas limped off the field with an injured leg and Will Genia didn’t last the full eighty minutes.  Just what you want before heading into the Finals – to suddenly lose your form as well as three key players.

In the end, the Reds simply petered out.  And against almost everyone’s predictions, the Brumbies finally ended the Red’s 13 game win streak at Suncorp. 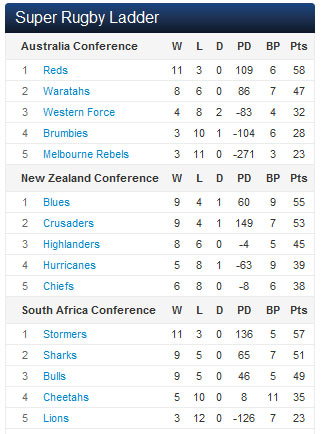 The game also ended my own personal streak of watching Reds and Roar games live where neither side lost.  It’s been a loooong time since I’d been to Suncorp and come away seeing my home team defeated.  How long?  Well now that its ended, I thought it would be fun to look it up on Wikipedia.

28 games in a row without seeing the Reds or the Roar lose at home.  15 months.  A total of 2,430 minutes of watching my teams without defeat.

It was an awesome run and I’m sure neither side will likely put together such a string of undefeated games for quite some time, if ever.  I was just happy to be there to see it happen.  I can still remember in 2009 when I was watching these two sides and neither of them seemed capable of winning two games in a row.  I’ve loved every minute of their change in fortune.

Looking back on it now…I’m still not quite sure how I managed to talk Jen into letting me go to watch so much sport.