So a year has passed since we last faced this juncture.  The annual sports gaming conundrum:  FIFA or Pro Evo Soccer?  The 2010 installment of The Decision sparked an upset where, for the first time in over a decade, the people chose FIFA.  It had been a long time coming.

For the last few years there had been plenty of gripes about the PES series which I think is the franchise that people want to like more.  It was never anything major.  Just niggly complaints about the graphics, playing speed, corner and free kick taking etc which didn’t seem to be getting addressed.  Comparatively, FIFA was getting stronger by the year and finally, in 2010, they surpassed PES in quality.

So how have Konami responded with this year’s Pro Evo?  Will EA be taking greater steps to ensure their newfound advantage is sustained?  Well, you can find out for yourselves.  Both games released a playable demo on Xbox Live and the Playstation Network this week.  I downloaded both games last night and gave them a go.

First, lets talk FIFA 11.  I played five games of Real Madrid vs Barcelona.  The first two were scoreless but then I found out I was playing on World Class mode by accident.  After dropping to medium difficulty (Professional), I played out another scoreless draw and won two games 1-0.  The presentation of the game is superb as always.  The player likenesses are improved, in particular the facial detail in close-ups on replays is impressive.  The animations appear identical to last year and for that matter, so do the controls.  I’ve really warmed to them however, having played a ton of FIFA 2010.  I’m pretty keen on getting an update roster for the A-League too since Ange Postecoglou became the Brisbane Roar coach and they ditched 80% of their squad from 2010.  Nowadays, Tommy Oar plays in a Dutch League and Craig Moore is wearing a striped uniform in a Dubai prison. 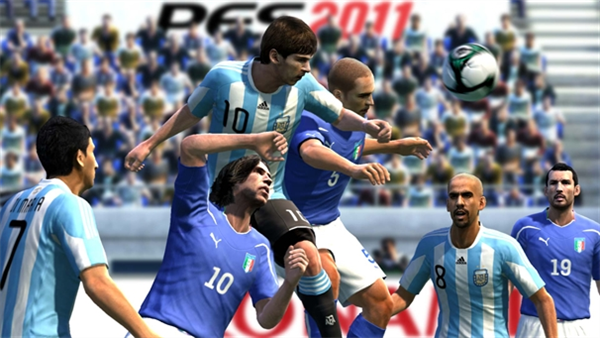 PES is the more interesting demo to try out.  They have a lot more to gain so clearly there are more radical changes to their game.  You’ll notice this straight away with the game’s presentation.  Gone is the traditional PES interface which has those boxes with the player names across the bottom of the screen.  Instead, the names are stamped on the player with the ball and they also have a bright rainbow arc that appears under them which is a strength meter for when you kick the ball.  It makes the game look rather arcadey.

Its a funny thing about the controls.  I’ve played Pro Evo games since Winning Eleven first came out in 1996.  And yet I found I was struggling to get back into it after so much FIFA last year.  In particular, I miss having the sidestep move from FIFA (Left trigger + roll right thumbstick).  Does PES have an equivalent move?  I forget.

Anyway, I played three or four games and found it was taking me some time to get used to PES‘s pace and play mechanics.  It’s certainly not a huge step up in quality over FIFA.  It’s different to last year’s version but my initial impression was that it wasn’t necessarily any better.

Anyway, we have some decisions to make.  Not only which game to get but also on which console.  I remember reading on Facebook shortly after I visited the UK that Pat had bought a Playstation 3.  So what’ll it be gentlemen?  Pro Evo 2011 or FIFA 2011?  Are we playing it on Xbox 360 or on Playstation 3?

Previous: No updates
Next: Easy A