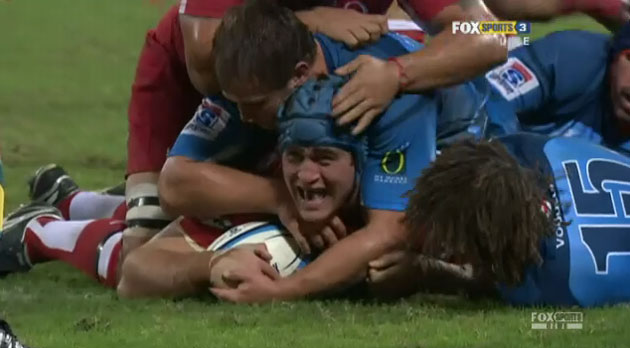 It’s been about a month since I last blogged about the Reds.  I missed their last home game as I was away in Melbourne for the F1 Weekend.  A short summary of whats been going on:  we won every single game and are top of the Super 15 table for the first time in over a decade.

It’s been a dramatic turn in form for the Reds since their slow start to the season where they had two cumbersome victories and a loss to old rivals NSW Warratahs.  Since then they have blitzed the competition and just returned from an undefeated tour of South Africa besting the Lions and the much fancied Stormers.  Their first game at home after the South African tour would be a tough assignment however: they were playing the Bulls who are the defending champions of the competition.

The Vodacom Bulls are probably one of the toughest teams in the world.  How tough?  Well, after winning the Super 14 last year, one of their players killed a police officer with his bare hands and another player killed three men with an axe, one of whom he decapitated.

The game was billed as one of the matches of the round and it didn’t disappoint.  Both teams played outstanding running rugby and after a tense opening ten minutes, the tries started flowing.  There was nine tries in total and man of the match Quade Cooper put in a career best performance, scoring one try and a drop goal as well as lighting up the field with his mazing runs that troubled the Bulls backline throughout the game.  The only aspect of his game that disappointed was his kicking where he missed three chances from the touchline.  Although it didn’t affect the outcome of the game, it did somewhat flatter the Bulls in the final scoreline.  Perhaps its time for the Reds to start giving more kicking opportunities to newcomer Mike Harris who looks pretty handy with the boot.

One of the highlights in the game came ten minutes from fulltime when Digby Ioane chased down a loose ball from deep inside his own half to outsprint the Bulls players and score a try that sealed the game.  After scoring he busted out some sweet breakdancing moves much to the delight of the crowd at Suncorp.  I have captured it in GIF form for posterity:

The Reds have now tied their club-best winning streak, having successfully won six games in a row.  Next week, they entertain the Warratahs at home in what will probably be the biggest home game of the season.  If they win it, surely they will have secured the position as the best Australian side in the competition which guarantees them a spot in the finals.  The pressure is on! 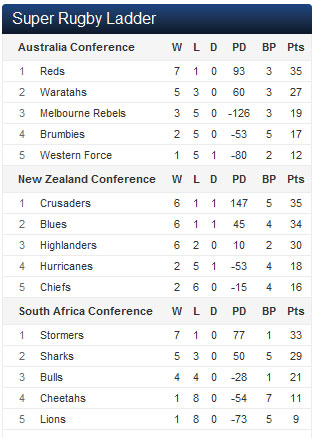 Previous: Youtube Friday: Rollercoaster of Love
Next: The Art of Nick J Boyd