It was top of the table versus bottom of the table when the red card prone and injury-ravaged Wellington Phoenix visited Brisbane on Sunday.  Few punters gave the Nix a chance.  After all, the Roar would be angry and in the mood for goals after being held to a 2-2 draw against a nine man Melbourne Victory the previous week.

It didn’t take long for the Roar to make their mark.  A free kick on the edge of the penalty area in the 14th minute from Thomas Broich curled into the box and an unmarked Besart Berisha scored his seventh goal of the season.  1-0 to the Roar.  It looked like it would be a miserable afternoon for the visitors.  The Roar had a redonkulous 75% of possession and was peppering the Phoenix goal with shot after shot.  I didn’t rewatch the match on tv later but if memory serves, I don’t believe that the Phoenix actually had possession of the ball in the opposing half for the first twenty minutes of the game.

Unfortunately for the Roar, that second goal proved hard to come by.  Henrique had a powerful shot saved.  Nakajima-Farran rattled the post.  Berisha had a shot saved from close range.  The damned thing wouldn’t go in.  Then, with less than ten minutes to halftime, Leo Bertos lead a rare Wellington Phoenix attack and delivered a superb cross to Nick Ward who squared it back for All Whites striker Tim Brown to level the scores at 1-1 completely against the run of play.

From there, the Phoenix parked the bus and parked it hard putting every man behind the ball.  In the 38th minute of the game.

The second half saw the Roar maintain that same possession stats as they poured in 38 balls into the penalty area and had 18 shots at goal but they couldn’t beat Warner.  And in two seperate instances, Nakajima Farran and substitute Kofi Danning fired wide with only the keeper to beat.  It was a frustrating afternoon of football.

After the full time whistle blew, the Fox Sports commentators began crowing that the formula for stopping the Roar had been discovered – play all eleven men behind the ball and sit deep inside your own half!  I wasn’t very impressed.  While it’s been nice to see the Roar win the title last year and continue their unbeaten run this season, I was also looking forward to a time when other sides would step up their game and really take it to the Roar.  Perhaps I was being a tad naive in thinking it would come from another side playing attacking football.  I really hope other teams don’t watch the Victory and Phoenix games and decide that the best way to beat the Roar is to camp just outside your own penalty area and hope for the best from a couple of counter attacking opportunities.  It’s not really what this league needs.

That said, the Roar should have put this game away.  They had numerous chances where you feel last season a Barbarouses, a McKay or a Solozarno would have scored but of course those players are gone.  We’ve got a goal scoring beast in Besart Berisha but he can’t do it alone.  Eventually Kofi Danning and Nakajima Farran are going to have to start delivering goals when they count.  And it would be nice if Matt Jurman lifted his game in defence.

Next week:  The Roar will visit Newcastle Jets and a win or a draw here will see them equal the all-time Australian unbeaten record in any footballing code (35 games), currently held by the Eastern Suburbs Roosters of 1935 in rugby league.  An interesting fact about the Jets – they are the only side the Roar haven’t beaten in their 34 game unbeaten run.  They’ve played them 3 times and drawn every match.

Lastly, I won’t actually see that game when it airs because I will be out hiking near a dam.  Yes, my wife organised that trip.  So I will be avoiding Twitter and the Internet in general until I get back so I can watch the recording on Foxtel IQ.

The Roar remain unbeaten but they certainly haven’t been at their best in the past two weeks. 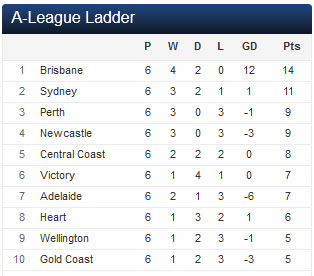