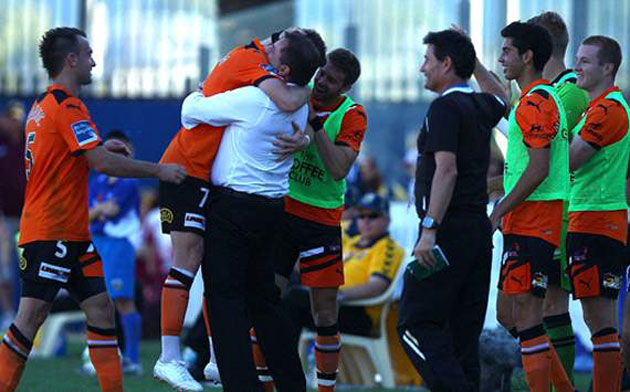 After I bitched last week about the Roar’s indifferent mid-season form which saw them concede the opening goal in ten out of eleven games, there finally came some sweet relief in Round Twenty of the competition when the side finally came together and played ninety minutes of football that showed us what they are capable of.  The unlucky opponents?  The league leaders and championship rivals Central Coast Mariners.

Although the Roar’s win at Gosford is very unexpected given the two team’s current run of form, there does appear to be something of a hoodoo for the Mariners when they play at home against the Roar.  They are yet to beat them in eleven attempts.  That said, it felt good to watch a game where the Roar finally won and won well.  Two first half goals, the opener from Erik Paartalu and the clincher from Besart Berisha, were the difference makers.  As they’ve done all season long, the Roar dominated the possession but they actually looked threatening in the final third of the pitch and made good on their chances.

It’s hard to tell whether this will make any real difference in affecting the outcome of the Premiere’s Plate.  The Mariners still have a game in hand and a formidable eight point lead over the Roar.  However, as a psychological edge heading into Finals Football, it is hugely important.  Despite the quality of Graham Arnold’s side, they hold the unusual distinction of having the worst record against the Roar of any side in the last two years.  They seem likely to meet in the finals and surely this game will give Graham Arnold some concern as to his side’s inability to get the upper hand over the boys in Orange.

There’s still a month of football left before we get to the finals so it’s too early to see whether this is a sign of the Roar finally turning the corner but for now, its nice to enjoy a comfortable 2-0 win.  I’d almost forgotten what that felt like.