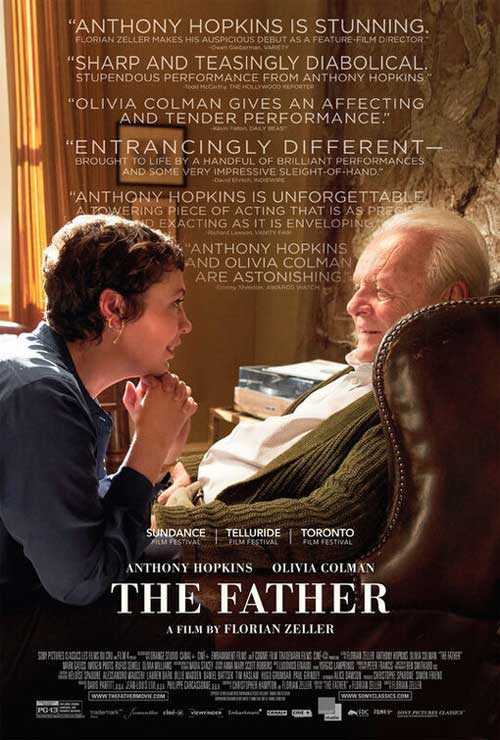 Anne visits her father Anthony, an octogenarian with dementia, in his flat in London.  She’s desperate to sort out their affairs after his belligerent behaviour leads to his most recent caretaker quitting in protest.  Anthony insists that he was right to act as he did because he is convinced the caretaker was stealing from him.  Why even have a caretaker?  Anthony assures Anne he is still self sufficient.  Anne lets him know that she intends to move to Paris with her boyfriend soon and without a caretaker, Anthony will need to be placed in a home.  This confuses and alarms Anthony who thought Anne was married to her husband James.  She tells him they separated five years ago.

“If I understand correctly, you’re leaving me, is that it? You’re abandoning me.” sneers Anthony.  The implications of their conversation devastates him.

The Father opens with Anthony living what appears to be a pleasant enough existence, listening to opera in his neat, finely appointed apartment.  But very quickly, he becomes disoriented by his surroundings.  He seems to relive the same conversations over and over.  There are huge gaps in his memory he can seemingly not account for.  Who is his caretaker?  Where is his watch?  Does the apartment belong to him or Anne?

Not only does Anthony loses his bearings, so do we as the viewer, seeing the world through his eyes.  Small details shift rapidly, confusing and confounding us.  The kitchen tiles change from one pattern to another.  The bag that contains Anthony’s chicken dinner changes colour.  Anthony even momentarily confuses his daughter Anne, initially played by Olivia Coleman, with another British actress Olivia Williams.

By setting the gaze of the film through the eyes of a man with dementia,  director Florian Zeller sets a tone akin to a horror film, despite the relatively benign nature of the conversations Anthony has.  The film imparts a hugely sympathetic outlook on both dementia suffers and their loved ones, as we can see and understand just how frustrated Anthony would be, struggling to pin down even the most basic details he thought he knew about his life. 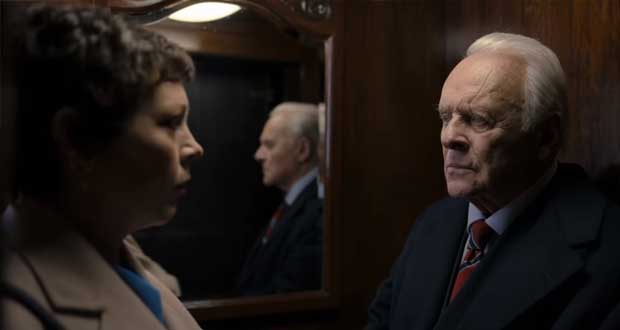 Anthony Hopkins delivers an incredible, layered and vulnerable performance in the lead role.  He exhibits an air of bravado that hints at the proud kind of man he must’ve been before age and illness took hold.  Now he struggles to grapple with his surroundings and tries, with utter futility, to exhibit some sense of order and control.  At times we see the old Anthony.  When Anne introduces a potential new caretaker (played by Imogen Poots), he momentarily rolls back the years and playfully flirts with her, dancing lightly on his feet and offering her an aperitif.  But Poots reminds him of his younger daughter and when she speaks in a manner that breaks that illusion, he turns on a dime, and lashes out with cruelty.

The Father is a tightly constructed, carefully honed film, that must’ve been storyboarded and planned to the nth degree.  Lines of dialogue repeat multiple times and conversations weave out of chronological order, until we suddenly arrive back to where we started.  Production designer Peter Francis does an incredible job with shifting and redesigning the flat over and over throughout the course of the film as it takes on the appearance of Anthony’s current reality or that of his memory.  Likewise much credit must go to editor Yorgos Lamrinos who has the unenviable task of putting together a film that is purposefully un-cohesive structurally, but still makes sense narratively, with a crescendo that is moving and heart breaking.

As an empathetic character study about dementia, The Father is a beautiful, near perfectly put together production.  The supporting cast – Olivia Coleman as Anne, Rufus Sewell as her husband/ex-husband, and Olivia William as her caretaker – are all wonderful performers and totally convincing in their roles as key figures slowly fading from the memory of Anthony’s life.  But it’s Anthony Hopkins, at 83, who is the stand out star of this film.  His performance is hugely affecting and one that will stay with me for some time.

A man refuses all assistance from his daughter as he ages. As he tries to make sense of his changing circumstances, he begins to doubt his loved ones, his own mind and even the fabric of his reality.

Summary : An incredible portrayal of the life of a man rapidly succumbing to dementia, powered by an incredible performance from Anthony Hopkins.

Previous: Nomadland
Next: Sound of Metal