It’s hard to believe that just one year after he made the earnest, flag-waving ode to Americana that was Saboteur, Alfred Hitchcock would follow it up with Shadow of a Doubt, a creepy paranoia-inducing thriller about an uncle who visits his sister’s family from out of town.  Sweet nature sixteen year old Charlie loves her uncle who has the same name as her but she can’t help but notice that something feels off about him.  Maybe its the way he has a tendency to grab her by the throat when he loses his temper?  Maybe its because he cuts out and collects newspaper articles about a serial killer on the loose who prays on unsuspecting women?  Could it be possible that Uncle Charlie is a psychotic, misogynistic mass murderer?

Shadow of a Doubt is one of Hitchcock’s first bona-fide classics.  A film that is as creepy and effective today as it was seventy years ago.  What’s interesting about the film in relation to Saboteur is how the character of Uncle Charlie prays on the gullibility of an idealistic American family who are wide eyed and naive enough to take him completely on face value.  In Saboteur, the hero of the film only succeeds in his journey thanks to the endless help of anonymous strangers who feel compelled to trust him because its the American thing to do.  In Shadow of a Doubt, the viewer is left tearing their hair out because Joseph and Emma, the unsuspecting parents, are so unsuspecting and miss all the signs that Uncle Charlie is not who he appears to be.  Uncle Charlie viciously exploits the trustworthy American idealism that Joseph and Emma believe in.

Shadow of a Doubt is one of the earliest films where we see two Hitchcock trademark’s emerge – the obsession with committing the ‘perfect’ murder and the strong female lead.

Let’s start with the perfect murder.  Hitchcock’s fascination with discussing and creating the perfect murder and its prevalence in his body of work reminds me of Stephen King and his obsession with the macabre.  King is most famous for his horror stories where details of gruesome and gory deaths feel right at home.  Years later, when he mellowed a little and branched out into writing different genres – teenage rite of passage (Stand By Me), a Close Encounters sci-fi epic (Under The Dome) or an honest-to-God romance (11/22/63), he still can’t help himself and he always slips in a bit of gruesome penmanship.  Even if its completely at odds with the tone of the story, if there is a murder or a dead body, a switch seems to go off in King’s head where he has to describe the sprays of blood, the squishing of brains and the breaking of bones.  I imagine he’d be a weird dinner guest that way.  He’d probably be super polite and charming but would get derailed describing a rare cut of steak.

In Shadow of a Doubt, the family patriarch Joseph Newton enjoys unwinding with a family friend by flippantly discussing how they would kill one another and get away with it.  There’s obviously a purpose to its inclusion in the film as Papa Newton is unwittingly housing a guest who intends to do just that.  However, the perfect murder becomes a recurring ingredient in many a Hitchcock film.  There are two films, Rope and Strangers On A Train, that are explicitly about killing someone for no other reason than seeing if you can get away with it.  It also recurs as a plot point in Rear Window, The Man Who Knew Too Much and The Trouble With Harry which all feature someone either discussing or explicitly trying to get away with a calculated murder that isn’t a crime of passion.  It wouldn’t surprise me in the least if we ever learned that Hitchcock actually bumped off a guy ‘just ‘cuz.’  He obviously spent a lot of time thinking and talking about it.

The other staple feature of Hitchcock films that we see in Shadow of a Doubt is the strong, independent female which is pretty rare in the classic Hollywood era, just as it is today in your average Michael Bay film.  Joseph Cotten has the most entertaining role in the film as Uncle Charlie but Teresa Wright is deserving of plaudits for her performance as Young Charlie.  Wright is well mannered, good natured and unsuspecting when we first meet her.  But unlike her gormless mother and father who continue to think the best of Uncle Charlie despite his weird and erratic behaviour, Young Charlie smells a rat and isn’t afraid to stand her ground.  The tension in the final third of the film comes from the moment where both parties lay their cards on the table.  Young Charlie tells Uncle Charlie that she knows he has a salty past and Uncle Charlie tells Young Charlie that he has a pathological desire to strangle and mutilate women.  Then they carry out their game of cat and mouse while still pretending to be a loving family unit around the rest of the Newtons.

One aspect of the film that hasn’t aged particularly well is the role of the two detectives who turn up at the Newton’s door, on the hunt for Uncle Charlie.  One of the detectives develops a romantic interest in Young Charlie and he’s probably twice her age.  She doesn’t exactly lead him on (this is 1940s Hollywood) but she doesn’t exactly turn him down either (this is 1940s Hollywood).  The detective is framed as the virtuous long arm of the law which probably wouldn’t sit quite right with modern audiences since he’s trying to stop the murderer but he’s also trying to date and marry your naive 18 year old daughter at the same time.

Shadow of a Doubt is a fine Hitchcock film that excels in a myriad of ways.  It’s a fantastic thriller first and foremost.  It’s technically a well constructed film.  It’s ahead of its time for its subversive content.  It’s the first Hitchcock film to include traits that become major recurring themes in his work.  And it has a groundbreaking female lead performance from Teresa Wright.

It’s hard to believe that just one year after he made the earnest, flag-waving ode to Americana that was Saboteur, Alfred Hitchcock would follow it up with Shadow of a Doubt, a creepy paranoia-inducing thriller about an uncle who visits his sister’s family from out of town.  Sweet nature sixteen year old Charlie loves her …

Summary : A creepy paranoia thriller that features a great performance from Joseph Cotten. The film also sows the seeds for what would become staples of Hitchcock films in the future. 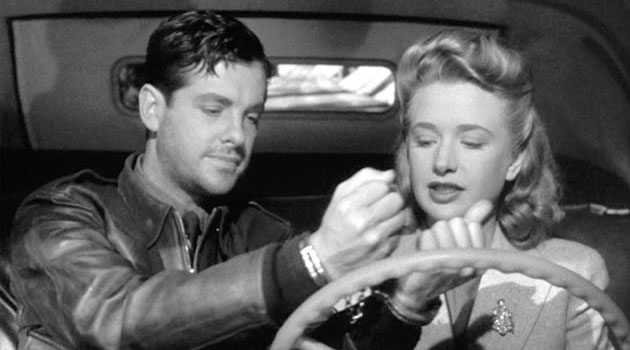