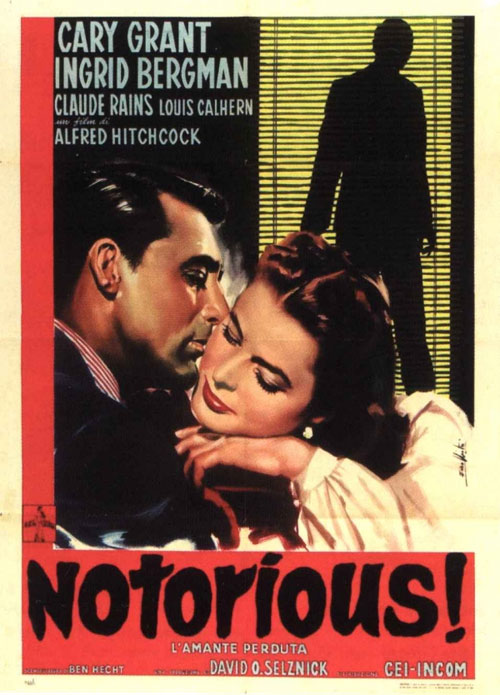 When casting your mind back to Casablanca, who can forget Ingrid Bergman’s performance as the sweet and saintly Ilsa Lund.  An activist and humanitarian desperately trying to do her part to support the Allies, she is torn by her love of two good men – the Resistance leader Victor Lazlo and the reluctant anti-hero Rick Blaine.

Casablanca was made in 1942.  Fast forward four years to Notorious and consider her performance in Alfred Hitchcock’s political thriller which is notable for a similar central conceit – a woman must choose between two men – but this is a tale about characters drawn with much rougher edges.  Bergman’s character Alicia Huberman is all kinds of trouble as we find out in the opening five minutes of the film.  She is a drinker, a smoker and in the delicately worded language of a Code-era Hollywood film (ahem) its implied that she is pretty free and easy with her love.

Alicia hosts a party shortly after the conviction of her father as a Nazi spy in America.  At the party, Alicia begins to drink herself into oblivion to cope with the pressure of a very public prosecution.  After downing a few rounds, she pops into her car and takes it out for a spin (!).  She gets accosted by a man named Devlin (played by Cary Grant) who reveals himself to be a C.I.A agent looking to recruit Alicia for the Americans.  Alicia protests and casts herself as the daughter of a traitor to America who is not to be trusted.  Devlin changes her mind when he reveals his knowledge of a secret audio recording in which Alicia stands up to her father and declares her love for America.

Alicia’s assignment is to travel to Brazil where the Nazi spy Alex Sebastian resides.  When she arrives in Rio, she and Devlin fall in love with one another.  Their affair is short lived however as Devlin soon learns of the mission briefing for Alicia.  She must seduce Sebastian to find out all he knows and what he is planning against the Americans.  Devlin does his job clinically and poker faced – he delivers the instructions to Alicia who interprets his demeanor and stiff upper lip to be an act of indifference to their relationship.  She retaliates by throwing herself headlong into an affair with Sebastian.  After meeting him at a polo club and wrapping him around her finger, she lets Devlin know that “you can add Sebastian to my list of playmates” which crushes him.  It’s not clear whether she’s supremely committed to the mission or simply spiteful towards Devlin but Alicia weds Sebastian soon after.

Sebastian (played by one of my favourites Claude Rains) appears to genuinely love and care for Alicia.  This is the strange and intriguing love triangle that Hitchcock has concocted for Notorious.  Devlin and Alicia are the film’s protagonists and yet there is a catastrophic misunderstanding between them – Alicia’s confusion about Devlin’s feelings and Devlin’s 1940s attitude about sexually independent women – that lead them to play a dangerous game that risks her life.  Sebastian on the other hand is a monstrous war criminal but his love for Alicia is sincere.  In a weird way, I had more sympathy for him. 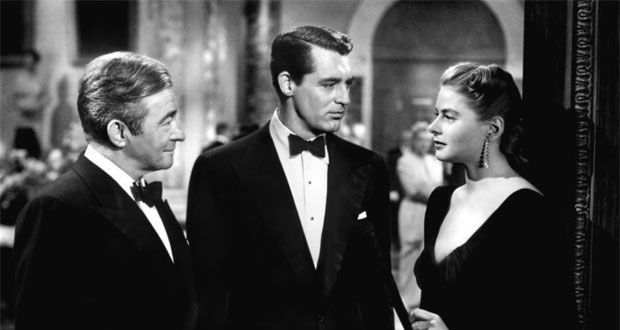 Much has been studied and written about Hitchcock’s attitude towards his leading women and the themes that recur over and over in his films.  So often do they feature beautiful women who are manipulated or molded by men and thrown into danger.  Notorious is no different in that regard.  What makes the film particularly interesting is that Alicia Huberman is by far the most sexually liberated character he has ever directed and that the film was considered rather salacious for its time featuring the ‘longest onscreen kiss in cinema history’ back in in the Forties.  It achieves this by breaking up Devlin and Alicia’s smooches with short little one liners as the Code didn’t permit an onscreen kiss for more than 3 seconds.  I feel as though this one of those instances where the censorship of the film classification board lead to Hitchcock making a better film.  The innuendo laden dialogue is an effective and colourful way to communicate the sexuality of Alicia’s character in a way that a mawkish love scene with Claude Rains (who was in his mid fifties when Notorious was filmed) could never achieve.

Notorious is widely considered to be one of the greatest Hitchcock films, despite not achieving the popularity of Rear Window, Vertigo or Psycho, and here’s why.  The film is set up as an elaborate house of cards in which Devlin and Alicia’s feelings for one another are constantly masked and manipulated by the C.I.A mission brief.  Alicia begins to uncover that Sebastian is smuggling something important in the wine cellar but by the time she makes any headway, he discovers her ruse and plans to kill her.  But for Sebastian to kill Alicia would be to reveal a massive security blunder to his Nazi colleagues, one that cannot afford to admit.  So Devlin, Alicia and Sebastian are all players in an elaborate game of cat and mouse.  Each has a hidden motive which conflicts with their heart’s desire and as the cogs begin to turn with both the C.I.A and the Nazis suspecting something is a amiss, each player much choose between following their heart and self preservation.

The final scene in the film is perfect.  As the tensions heighten and the noose begins to tighten on Devlin, Alicia and Sebastian, the final act plays out in breathless fashion when Devlin makes a bold move to rescue Alicia from Sebastian right in front of his Nazi comrades.  There is unbearable tension as Sebastian tries to stop Devlin without blowing Alicia’s identity.  It’s a scene thats been built up over the entire film and its brilliant in how understated it is despite the enormity of the consequences for all involved.

In the final shot, two people enter a car and escape to safety and another must climb a set of steps to their imminent death.  I can think of so few films that can have such a taught and well constructed ending.  There isn’t a single shot fired and no one bolts for freedom.  Instead, Devlin and Alicia coolly and calmly step into a vehicle and when Sebastian hears his comrade say “Alex?  Will you please come in” we know he’s been played and he is turning around and walking into certain death.

The Spy Who Loved Me

Summary : A clever and provocative political thriller with a great central performance from Ingrid Bergman playing against type.