I trust that on New Years Eve, all the TFW staff and readers had a great night and a fitting send off to 2010.  I know I certainly did.  Thanks to Rich for hosting a great evening with plenty of good food and drink.  That twelve year old Yamazaki.  Yeeeewwww!

2010 certainly had its share of highs and lows but I’m personally ringing in 2011 with a renewed sense of optimism.  I’ve got my beautiful wife, my great friends, a good job and I’ve got my health.  I can’t really complain.

There’s some new holidays that Jen and I are planning.  New restaurants that we want to try.  A Rugby World Cup to look forward to.  A Cricket World Cup!  A new Winnie the Pooh and Tintin movie.    New whisky to try.  New video games like Uncharted 3.  New video game consoles on the way.  In 3D!  New albums coming out from awesome old bands and hopefully I’ll discover some new music from bands that I’ve never heard before.    There’ll be plenty of stories that I look forward to sharing in 2011.  Hopefully I can keep pace with it all and document as much crap as I can on this website.  Hopefully Matt sticks to his New Years resolution to blog more.  Same goes for the other TFW bloggers.

At the very least in 2011 if you return to The FAT Website I’ll promise to deliver more film reviews, game reviews, TV Show Round Ups, TFW Book Club write ups, TFW Restaurant Guides and the occasional blog about whatever is on my mind or the latest stuff that I’ve been up to.  I’ve been doing it for over a decade, why stop now? 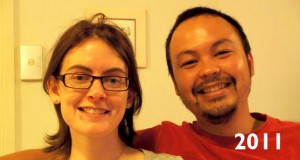