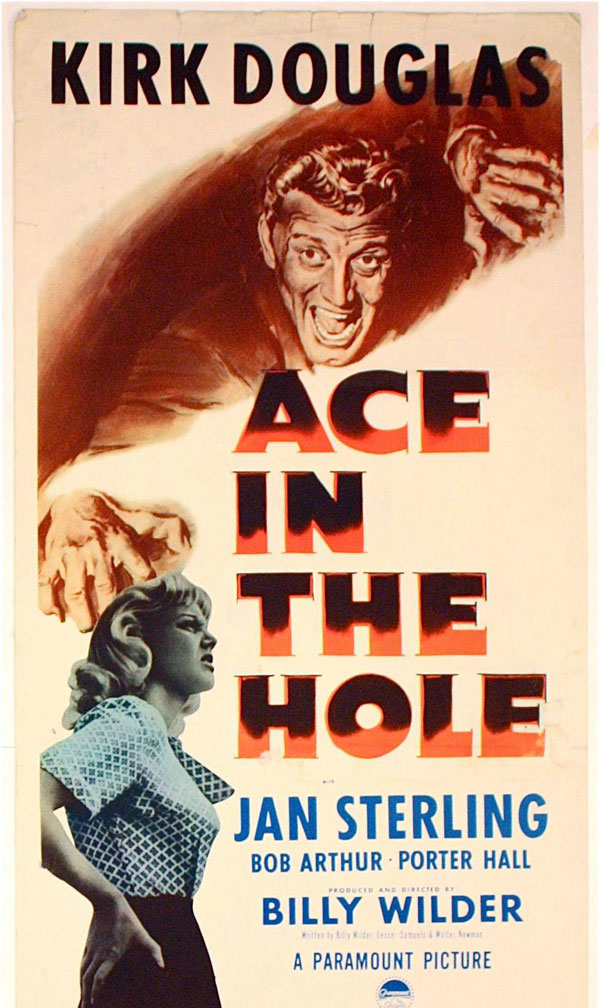 
It’s been a year since film critic Roger Ebert has passed but his website, his writing and specifically his Great Movies section continues to deliver long after he has gone.  I was reading Ebert’s review of Billy Wilder’s Some Like It Hot when he mentioned an overlooked Wilder gem by the name of Ace In The Hole.  A critical and commercial flop in its day, Ebert was full of effusive praise for this cynical and hard edged film about an opportunistic journalist who exploits and sensationalizes a situation where a man becomes trapped in a cave-in.  After watching the film, I think Ebert was on the money.  This is a terrific film and its a shame that its been more or less overlooked since its release.

Kirk Douglas plays Chuck Tatum, a ruthless and hard nosed journalist who arrives in the sleepy town of Albuqurque, New Mexico and heads straight for the local newspaper office, the Albuquerque Sun-Bulletin.  He demands to see the editor, insisting that his employment is worth a $1000 a week to the paper.  Tatum introduces himself as a big shot journalist, originally from New York, who has been fired from eleven different newspapers across the country for drinking, adultery and libel.  He practically strong arms his way into a job at the Albuquerque Sun-Bulletin, where Tatum anticipates he’ll have a short tenure before landing a Pulitzer prize and return to the big leagues.

A year passes and Tatum is frustrated with his lack of progress.  Nothing sufficiently sexy or salacious happens in Albuqurque to spin a good story.  He grows bored and listless.  The editor Jacob Boot sends him away with the Herbie Cook, a wide eyed new recruit, who is just getting his start and fresh out of college.  They are dispatched to a remote town to cover a rattlesnake hunt. 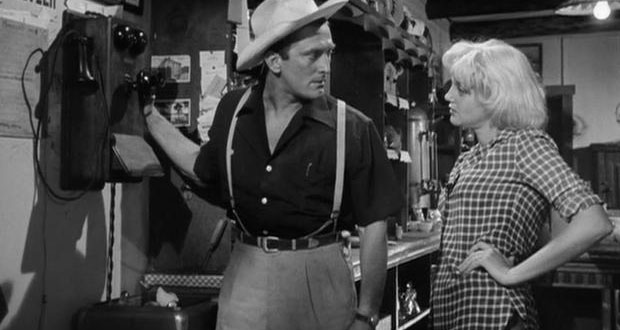 Along the way, Tatum and Cook happen across a trading post and learn that the owner, Leo Minosa, is buried alive and trapped in a nearby silver mine.  Tatum arrives at the location and immediately identifies the situation as the opportunity he’s been waiting for.  He enters the mine, finds Leo alive and well, albeit trapped under rubble, and sees dollar signs.  He will help organize Leo’s rescue, but not before he draws attention to this human interest story where he can make a name for himself and make his fortune.

Kirk Douglas is an absolute force of nature as Chuck Tatum.  He is steely eyed, lantern jawed and scarily single minded in his purpose.  The first thing he does is take a photo of Leo and send away an article to his editor, spruiking a tale about the curse of a local Indian burial ground causing the accident.  Not long after, Leo’s predicament and Tatum’s article begins to draw a crowd of rubberneckers, moths drawn to a light of human suffering.

As Chuck Tatum gets settled into the trading post to write his articles, he is alarmed to discover that Leo Minosa’s wife Lorraine, a cocktail waitress from Baltimore, is bored of her marriage to Leo and sick of her sedentary lifestyle in the remote desert.  She intends to take the remaining money in the till and hitchhike away to the nearest city.  Sensing that this won’t play well to the sympathetic story that he wants to write, Tatum imposes his will on Lorraine and forces her to stay, promising riches and fame.  It doesn’t take long for her to see this to be true.  Soon, thousands of onlookers begin to arrive.  They are willing to pay an entry fee to the trading post and they are happy to buy food and drink while they wait to see what happens to Leo.  Sure enough, Loraine will get her money.

Jan Sterling is terrific in her portrayal of Loraine Minosa as a cold and self absorbed woman, who aspires to be a Marilyn Munroe and is happy to throw herself at whatever man she needs to get there.  Like a dame out of a hard boiled noir thriller, she gets some biting one liners that perfectly encapsulate her persona.  When instructed to visit a church so she can be seen to be praying for Leo’s safe return, she replies “I don’t go to church. Kneeling bags my nylons.”  Her interactions with Tatum are some of the highlights of the film as we see two unscrupulous opportunists face one another, each vying for their own wants.  When Loraine makes herself available to Tatum, he turns her down.  You don’t feel this is out of any sense of moral duty towards Leo.  He just simply doesn’t want to take the risk while he’s working his story for the papers.

As the rescue team and the local sheriff arrive, Tatum quickly ensures he is the funnel for all information and can direct people as he pleases.  He makes sure that the sheriff blackballs any other potential journalists in return for favourable articles for his upcoming election.  The foreman for the rescue team believes he can get Leo out of the cave in a couple of days but after Tatum learns from a physician that Leo is in reasonably good health, he coerces the foreman into drilling into the cave from the top down, so that the rescue effort can be drawn out to last a whole week.

Ace In The Hole is a brooding and cynical film that turns a harsh and critical gaze upon the modern press and the people who consume it.  When Tatum explains his journalistic creed to the impressionable Herbie, its sobering and disarming to hear just how much it rings true sixty years later.  Tatum understands that people are drawn to spectacle, swayed by emotive stories that involve fear and uncertainty.  He explains methodically how to draw every last penny out of editors who are willing to pay for this breed of journalism and the type of people who consume it with a voracious appetite.  Scumbag journalists looking to make a quick buck are low hanging fruit for a film maker to attack but whats uncommon about Ace In The Hole is just how unflinching Billy Wilder is when he portrays the idiocy and gullibility of the rubberneckers who read this stuff.  When the crowds gather in their thousands to see Leo’s cave, there are insurance salesmen pitching disaster coverage, ad hoc charity funds set up to line Loraine’s pockets and carney folk who set up rides to occupy the kids.  Everyones out to make a buck off the easy marks.  If the set up for Ace In The Hole sounds too ridiculous to be true, its worth noting that its based on a true story and the film actually undersells the number of people who actually turned up in the real life scenario. 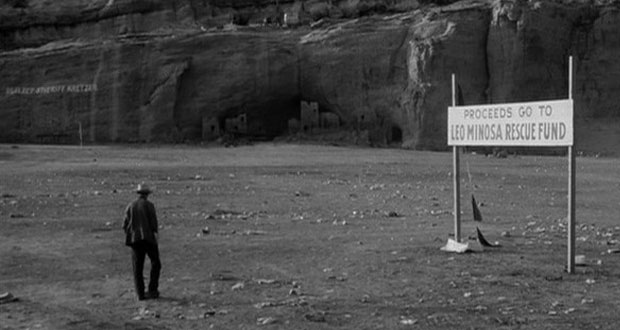 Ace In The Hole is Billy Wilder at his most acerbic and sharp tongued.  No wonder the film couldn’t find a broad audience.  It didn’t help that the distributors had a last minute change of heart and renamed Ace In The Hole to The Big Carnival which is a terrible name in its own right and does nothing to convey the tone of the film.  I loved this film for the incredible performances from Kirk Douglas and Jan Sterling.  Even when it all goes horribly wrong at the end and the enormity of what he has done settles in on Douglas, the film doesn’t give anyone an easy out.  The ones with the scruples fall on deaf ears.  The man with principles continues to run a small and unimportant newspaper with limited distribution.  Leo Minosa doesn’t make it.  The crowd feels bad for all of fifteen minutes and then they move on.

Summary : An under appreciated classic from Billy Wilder. Kirk Douglas is immense and the film is a cynical, razor sharp critique of contemporary news media that remains relevant to this day.