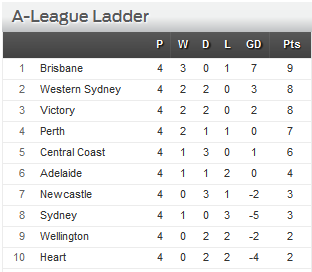 The Haves and Have Nots

We’re only four rounds into this season but already, there’s pretty decisive gap starting to open up in the competition with three teams undefeated (Mariners, Wanderers, Victory) and three teams yet to register a win (Newcastle, Wellington, Heart).  The scary thing is that it looks to me like the undefeated teams have greater scope for improvement whereas the win-less teams seem like they’ll have to pull a rabbit out of a hat to change their fortunes.  On the plus side, this is a ten team competition with six finals spots so everyone should have something to play for for the entire season.

Luckless Sydney FC continued their woeful form and torrid luck with an away loss to Perth Glory thanks to a penalty given to Perth where there was not one but instances of offside in the lead up.  Perth seemed happy to sit back in the second half and give Sydney every opportunity to equalize but Sydney are…you know…woeful.  They’ve now gone 3 games without a goal.  Poor Del Piero.  He looks so sad playing with a bunch of terrible, untalented, unmotivated team mates.  Coach Frank Farina finished the week by blogging about how rubbish Sydney’s fans are and how they should show greater support and appreciation.

Speaking of scoreless, Newcastle Jets broke an eight hour scoring drought against derby rivals Central Coast Mariners.  More memorable for the wrong reasons was the second goal when Mariners goalkeeper Justin Pasfield miskicked a passback and saw the ball trickle into his own net.  The elated Jets fans celebrated so hard they broke the perimeter fencing that encloses their supporters area.  Despite leading 2-0, the Jets were unable to close out the game with the Mariners snatching a draw.  It’s the second time the Mariners have done that in three weeks.  They look ridiculously hard to beat.

Western Sydney Wanderers secured their first ever come from behind victory, coming back from 1-0 to beat Adelaide United 2-1.  The game was notable for a studs up challenge from Jerome Polenz that didn’t get a red card.  It’s the second successive week Polenz has escaped penalty for this time of tackle.  Mark my words, the FFA will want to see the Wanderers go far in this competition and like the Manchester Uniteds and LA Lakers of this world, they will have plenty more favourable refereeing decisions go their way.

There are three certainties in life.  Death, taxes and Melbourne Victory winning at home against Wellington Phoenix.  An electric opening 30 minutes saw the Victory march ahead to a 3-0 lead and although the Phoenix gradually brought themselves back into the contest, it was too little too late.  It’s a tough lot for the Phoenix.  They’ve really not played that badly in the first four rounds but all they have to show for it so far is 2 points.  They need a game against Sydney FC urgently to revitalize their season.

Home Is Where The Heart Is 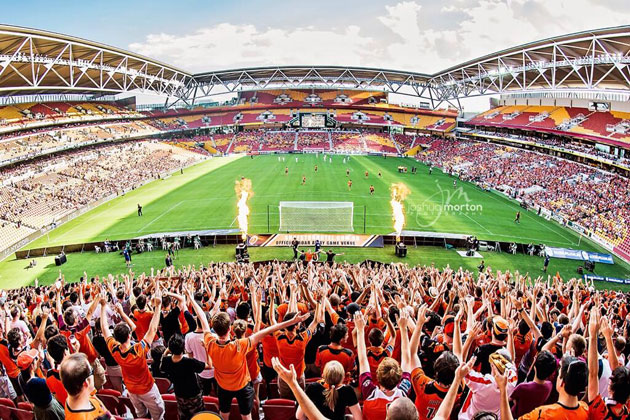 The Brisbane Roar played their second home game of the season against Melbourne Heart.  The Heart have had their struggles on the road having gone without an away win in two years.  This game saw the team with the best possession and shots on goals stats (the Roar) versus the team with the worst possession and least shots on goal (the Heart).  You wouldn’t have known it in a baffling first half where the Roar were absolutely awful and gifted the Heart no less than three golden opportunities which they failed to capitalize on.

A handy tactical change in the second half from coach Mike Mulvey who moved Henrique from the wing to striker saw immediate returns with a goal in the 48th minute.  From there, the Roar had all the momentum and came away comfortable 3-0 winners.

Although I’m thrilled to see the Roar sit at the top of the table, I think its far too early in the season to get excited about our prospects.  The Heart and Sydney FC were both exceptionally poor opponents and our first big test against Melbourne Victory ended in defeat.

Next week’s tough away game to Central Coast Mariners will give us a fair indication of how the Roar will go this season.  The way I see it, they have three contenders to the Premiere’s Plat – the Mariners, the Wanderers and the Victory.  It’s great that we can deliver a thumping defeat of the competition minnows but how we fare next week will give a much better indication of how our season will go.

Previous: The Cabin In The Woods [2012]
Next: Kids React to Gay Marriage