When Nintendo announced that two of their 2010 holiday season video games were going to be the latest instalments of the Donkey Kong and Kirby franchises, it was as if the company was extending an olive branch to fans of their classic catalogue of platform games from the Nineties who had begun to feel neglected during recent years.  Donkey Kong Country Returns and Kirby’s Epic Yarn both looked to offer up a welcome serving of platform gaming and a heady dose of nostaliga to boot.

I have my own fond memories of playing the original Donkey Kong Country back in 1994 and the trailer for the latest instalment hinted at a game that very closely followed the blueprint of the original.  The remixed yet strongly familiar soundtrack set the tone for the Retro Studio’s intentions while the graphics captured the feel of the original series perfectly.  Though I hadn’t played a Kirby platform game before, Kirby’s Epic Yarn also looked very appealing with its unique and charming patchwork visuals.

The 2010 holiday season rolled around and I had an opportunity to play both games.

So how were they? 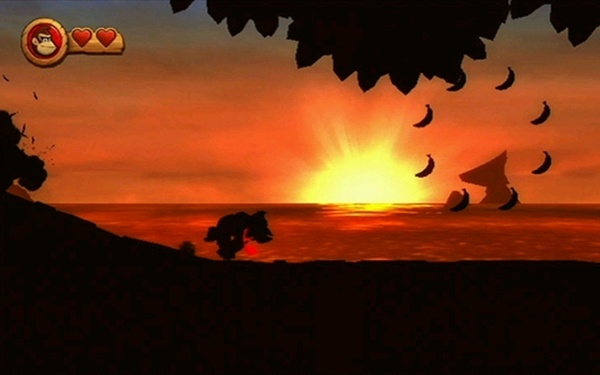 Lets start with Donkey Kong Country Returns.  The game draws you in with a charming non-verbal introduction that sets the scene.  It’s a pretty straightforward proposition: a hypnotic group of Tikis have stolen Donkey Kong’s hoarde of bananas and its up to him and his pal Diddy to retrieve them.  Simple.

The game’s controls initially take some getting used to.  Annoyingly, for a game that takes its audio visual cues so strongly from the original series, the same consideration isn’t afforded to the control layout.  There is no option to use the classic controller.  Instead, you’re either using the Wii-mote horizontally or utilizing a combination of the Wii-mote and nunchuk.  Neither option feels as precise or as satisfying as you would want.

Qualms about the controller aside, the game is great fun during the first three or four worlds.  Developer Retro strikes a fine balance between revisiting the mechanics of the original game and adding their own ideas to the mix.  I like that they added a heightened sense of spectacle to the proceedings.  Some segments of the levels have Donkey Kong rapidly shooting through a sequence of barrels that skip between the foreground and background, often interweaving with giant screen-sized Easter Island style statues.  This creative approach to adding depth to a 2D platformer gives the game a strong visual flair and also hints at how some games may incorporate the 3D capabilites of Nintendo’s upcoming 3DS game system.

Unfortunately, the game rapidly takes a turn for the worse around the fourth world.  It suddenly becomes infuriatingly, hair pullingly, ball breakingly difficult.  There is a deluge of mine kart and rocket-riding levels where a single hit to Donkey Kong ends the game.  The checkpoints are painfully far apart during these levels.  Boss battles turn into frustrating showdowns with projectile throwing enemies where memorisation rather than skill will get you through.  And the unforgiving control scheme (there are no wall jumps) means that you will die a lot during these levels.  I don’t mind my platform games challenging.  I felt with DKC Returns however, it simply became tedious.  The game stops being fun.

There is a rather misguided Super Guide that offers to play the level for you once you die eight times.  I say misguided because the Super Guide is presented as a family friendly option to help a newer gamer pass through a particularly tricky level. In truth, I’m convinced that the incredible difficulty of Donkey Kong Country Returns puts the game beyond the abilities of all but a handful of hardcore gamers.  There is no point in having a Super Guide because once you reach the fifth world, the game is so hard that a newbie would be using it almost every single stage.  Where’s the fun in that?

I perservered as far as the sixth game world before I gave up.  Too.  Damn.  Hard. 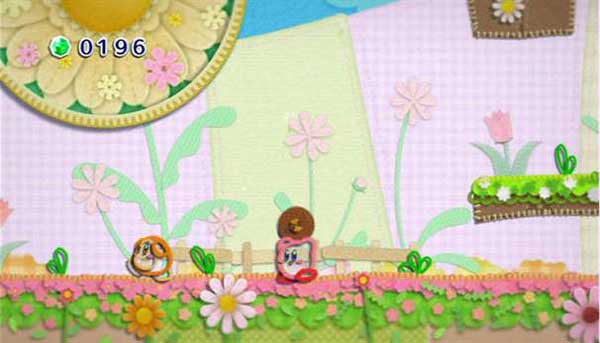 Onto Kirby’s Epic Yarn.  As far as offering up a plot synopsis goes, I’m compelled to defer to Edge Magazine’s excellent write up in their End of Year awards.  I’m paraphrasing but it goes something like this:  ‘Kirby discovers a magical kingdom where everything and everyone is made from wool and buttons.  Kirby proceeds to mercilessly kill everything on sight.’

Now if Donkey Kong Country is a game that has the appearance of a family friendly nostalgic throwback but in actuality is a hardcore platform game of exceptional difficulty, then perhaps in an attempt to reach out to less able players who might be feeling left out, Nintendo has given us a Kirby game that is, almost in a literal sense, for babies.

The game’s opening cinematic is narrated by someone who sounds like he is doing the voice over for a cartoon targeted at infants.  The game itself has some incredibly inventive and gorgeous imagery but the pacing is rather pedestrian and to ensure minimum stress for the player, it is not actually possible to die in this game.  Kirby can be momentarily hurt and spit out a few gems as a result but that’s it.

After strolling through a couple of levels, once again I put down the controller.  I simply found the game’s absense of challenge too detrimental to my sense of accomplishment in completing the levels and the charming graphics weren’t enough to overcome my sense of alienation at the childish voice overs and overall presentation.  Too.  Damn.  Easy.

For any other Nintendo fan who felt the same way about these two games, take heart.  I can still refer you to the excellent Super Mario Galaxy 2 which came out in the middle of 2010.  It offers inventive level designs, bright and colourful graphics, a balanced difficulty setting and a touch of nostalgia.  If Donkey Kong is too hot and Kirby is too cold, then Super Mario is just right.

More fun than a barrel of yarn