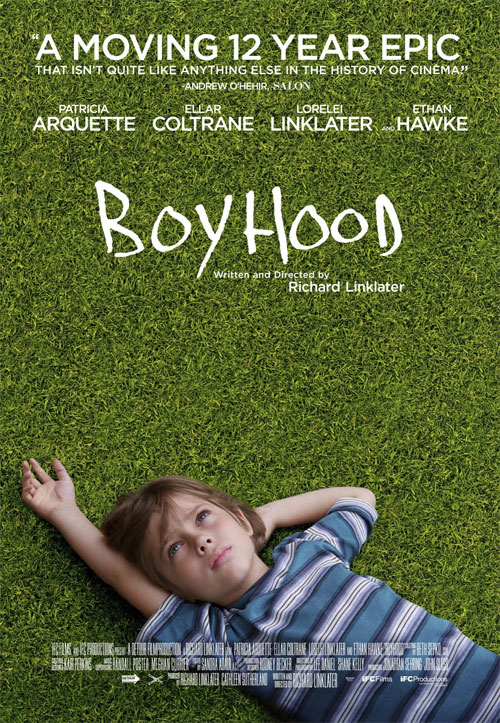 Film making doesn’t get any more challenging or ambitious than Richard Linklater’s 12 year odyssey Boyhood, a film that was shot from 2000 to 2012, that captures the trials and tribulations of Mason Evans, a young boy growing up in suburban Texas.  We are introduced to him as a spritely and wide eyed six year old and then we watch him transform into a young adult by the film’s end.

It’s an incredible project to conceive of and its even more impressive to watch it unfold before your very eyes.  I learned from Mark Kermode’s review of the film that Lars Von Trier had tried a similar project and scrapped it when it became too difficult.  It’s one thing to have the vision for making a film that documents twelve years of a family’s life.  It’s another thing all together to have all the stars align with discovering talented young actors in Ellar Coltrane and Lorelai Linklater, writing a script that engages the audience’s interest beyond the novelty of the aging process and then executing it in a fashion that feels tonally consistent for the 4,000 days that would have passed since the first day of shooting.  At the start of the film, I had a million thoughts in my head about the various challenges the film could have faced.  What if one of the adult actors dropped out?  What if it became apparent that one of the kids stunk as an actor?  What if you got halfway through the filming and decided the story needed tweaking?  All these ideas washed away pretty quickly thought because right from the outset, I was reminded of just what a talented and assured film maker Richard Linklater is.

So what does the film actually have to say?  What is it about?  I found the title to be a curious misdirection because the film is just as much about Mason’s family as it is about Mason.  At six, Mason and his sister Samantha live with their single mother Olivia, played by Patricia Arquette.  Their absent father Mason Sr. (Ethan Hawke) is ‘away in Alaska’ and appears to have fallen out of contact with Olivia.  We can infer from her situation that they had kids together at a young age and the responsibility appeared to overwhelm him.  This leaves Olivia as a young mother who feels exhausted and robbed of opportunity in life.  We are not long into the film when Olivia has an argument and subsequent break up with her boyfriend who is frustrated that Olivia is not able to keep a date.  Exasperated, she cries out “I was someone’s daughter and then I was somebody’s fucking mother!”

That breakup begins a long series of lousy relationships that Olivia throws herself into.  There is an interesting dichotomy in the film where Olivia continues to work hard and educate herself professionally so that she can better support herself and her family but she continually finds herself hampered and let down by the men in her life – a seemingly unending procession of one insecure alcoholic after another.  The irony is that she becomes an accredited college professor and avowed liberal feminist and yet her biggest undoing seems to be a series of boyfriends and husbands who impose themselves as breadwinners and rule-setters upon her and her children.

As Mason Jr grows older, his father gradually becomes a figure of influence in his life.  Mason Sr is carefree and compassionate towards his children and although he is well meaning, his stunted maturity clearly made him an unfit parent when they were younger.  Fatherhood seems to grow on him in time however and eventually he earns the trust and respect of Mason Jr and Samantha by driving extraordinarily long distances to see them on weekends.  A lot of the film’s humour comes from Mason Sr and his ham-fisted interactions with his kids.  Sometimes he comes on too strong, demanding that they open up emotionally to him.  Other times he offers some hilariously questionable or ill-suited advice.  For me, one of the film’s funniest and most sincere scenes doesn’t directly involve Mason Jr.  It’s when Mason Sr tries, and fails, to have a conversation with Samantha about the virtues of safe sex.

As for Mason Jr and Sam, we see them grow up through little Slice of Life moments that Linklater has a real knack for writing.  Bike riding in the neighbourhood, playing video games with your friends, surviving bullies and being the new kid in school.  These are all snippets of Mason Jr’s life that we are witness to and Linklater makes the choice to be very specific with the details which age them to a very particular day and date.  The film begins with the Coldplay song Yellow which identifies the film as starting in the year 2000 and the culture touchstones go from there.  Mason Sr rages about George Bush and rallies behind John Kerry.  We see Mason Jr play Halo 2 on an Xbox with his friend, go to the book launch of Harry Potter and the Prisoner of Azkaban, play Wii Sports and talk about The Dark Knight and Pineapple Express.  These give the film an added air of authenticity and discreetly assist the audience in keeping track of the time. 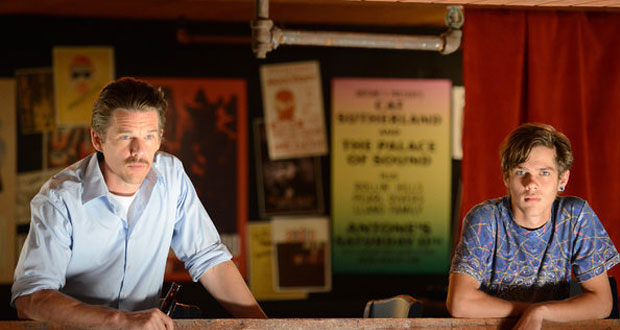 There are lots of themes and ideas that are covered in Boyhood.  Some are fairly banal observations about modern family life.  I felt as though Linklater definitely had something to say about the men of Generation X, who by and large in this film struggle to find their place in society.  They struggle with how to relate to women, how they can offer advice to the younger generation and they seem to feel undervalued and ignored.  Gender politics are also covered in pretty extensive detail in the film.  I mentioned that Mason Jr’s mother is a feminist influence on him but he also faces a lifetime of temporary father figures telling him to cut his hair and ‘man up’, boys in the play ground bragging about sexual conquests and a college girl who he falls for only to be heartbroken when she cheats on him.

Boyhood is an apolitical film but it doesn’t shy away from politics and religion.  When Mason Sr begins dating a woman with devout Christian parents, Mason Jr finds himself at a party celebrating his birthday where he is given a bible and a shotgun as gifts.  If anything, I think Linklater seems to keep politics at arms reach and has a gentle chuckle at how silly the whole thing is.  Watching Mason Sr get excited about John Kerry feels quaint and ridiculous and just as funny is seeing Mason Jr door knocking and offering Obama paraphernalia to a neighbour who hangs a confederate flag and has a handle bar moustache.

Boyhood is a film that explores many different facets of life through the lens of the Evans family.  It condenses twelve years of filming into 165 minutes and explore childhood, adulthood, family, friends, loved ones, education, politics, drugs, alcohol, religion and more.  It’s a remarkable film that is hugely entertaining to watch and will likely stay with you long after the credits roll, whether its thinking about the film itself or whether it gives you pause to think about your own life, your own dreams, fears and insecurities, what you’ve experienced and where you’re going to next.

Shot over 12 years, Boyhood documents the life of a family growing up in suburban Texas.

Summary : An incredible film that is ambitious, entertaining and invites you to ponder on life's foibles and fleeting nature. 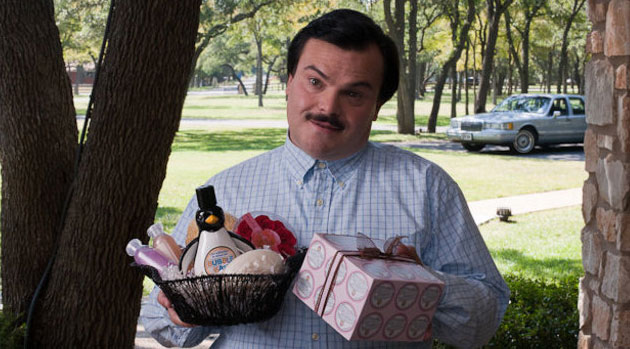