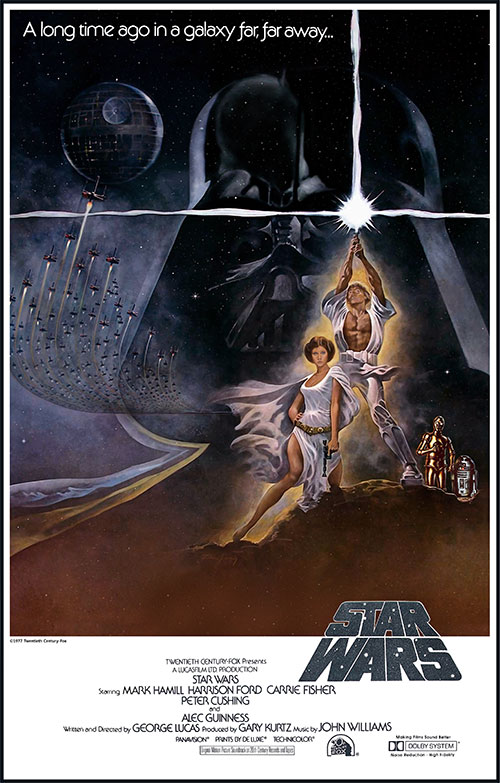 George Lucas is a visionary film maker who has made an indelible mark in pop culture history.  He is responsible for one of the most popular and enduring film franchises ever created and along with Steven Spielberg, is basically the Godfather of the modern day blockbuster.

Star Wars: A New Hope – the original Star Wars film – was released in 1978 and to this day it remains one of the finest instalments in the series and one the greatest films ever made in its own right.  It is unmatched in the cultural cache that it carries.  It has made screen legends out of Mark Hamill, Carrie Fisher and Harrison Ford.  It is visually iconic – from the neon glow of the light saber to the simple sleek costume design that informed the looks of Darth Vader and the Storm Troopers.  To this day it has one of the most outlandishingly bombastic and scintilating musical scores ever recorded for film.  Star Wars really was a perfect storm in which everything came together just so.

The film begins in memorable fashion with the iconic yellow text scrolling into the vast expanse of space, throwing the audience head long into a story about heroes, villains, aliens, robots, princesses and space ships.

The opening shot of a gargantuan Super Star Destroyer swooping overhead as it chases Princess Leia’s miniscule rebel ship is the perfect introduction to the Star Wars universe and one of the many reasons why a newcomer to the series should start with A New Hope over The Phantom Menace.  It stirs the imagination and instantly lets the viewer understand the size and scope of the film they’re about to witness.

One of the greatest attributes of A New Hope – which may be harder to appreciate in a modern context – is what an incredible job it does in introducing the universe and its characters to an audience previously unfamiliar with Star Wars.  It unloads a ton of exposition in deft fashion, telling us just enough about Luke Skywalker, Princess Leia and Darth Vader in the opening act to make us invested in their fate.  Arguably the biggest failing with the second trilogy conceptually is that it strips away a lot of the mystique of Star Wars, telling us more about the Force and Darth Vader than we probably needed to know. 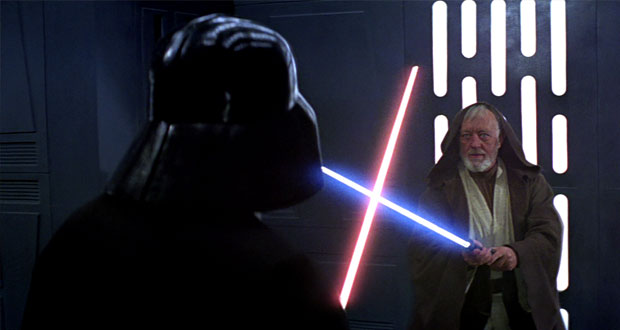 The story begins in earnest when a young Luke Skywalker and his uncle purchase two droids – R2D2 and C3PO – who were formerly the property of Princess Leia.  Luke uncovers a secret holographic message inside R2D2 in which Leia begs the assistance of the mysterious Obi Wan Kenobi.  Luke becomes enamoured with this vision of a beautiful princess and decides he will track down Obi Wan and Leia.

At its heart, A New Hope is a simple and well worn story.  The Heroes Journey in which a Chosen One embarks on a quest to save a beautiful princess was inspired by the pulp sci-fi serials of Lucas’ youth such as Flash Gordon.  The rest of the film is a melting pot of ideas and tropes that Lucas has cribbed from countless sources.  It’s fantasy, sci-fi , fairy tales and cheap dime store pulp fiction all rolled into one.  It comes together as far greater than the sum of its parts.

Part of what makes Lucas’ films so unique is that for all his ambition and creative flair, he also had some baffling and off-kilter ideas that could confuse and confound audiences.  Friends, mentors and collaborators have been trying to help hone Lucas’ vision ever since he dreamed up the idea of a plucky young Jedi Knight battling a galactic empire and decided to call it Adventures of Starkiller Episode 1: The Star Wars starring Luke Starkiller.  I can’t imagine some of the stranger narrative twists in the tale – such as Luke Skywalker unwittingly becoming attracted to his twin sister – would ever have made it out of pre-production in this day and age.  In 1977, a guiding hand seemed to do just enough to let Lucas’ imagination shine whilst cutting out any characters or narrative arcs that wouldn’t work.  Given freer reign and left to his own devices with the new trilogy starting in 1999, Lucas would struggle to find that balance.

Perhaps uncertain of whether he would be able to make more films in the series, George Lucas goes for broke in cramming in as much story as possible in A New Hope.  Revisting the film this year in anticipation of A Force Awakens, I was reminded of what a breathless pace the film clips along at.  We are introduced to all the key characters, learn about the ways of the Force, witness the firepower of the Death Star and are jet setting in the Millenium Falcon to rescue Leia, all within the first hour of the film.

Where A New Hope is successful in filling in the blanks – the transition from Luke Skywalker meeting Obi Wan Kenobi to becoming a full blown Jedi apprentice happens in a matter of minutes – is thanks in large part to the razor sharp script that paints the characters in very broad strokes and then colours in the details with smart little idiosyncrasies, well observed mannerisms and punchy one liners. 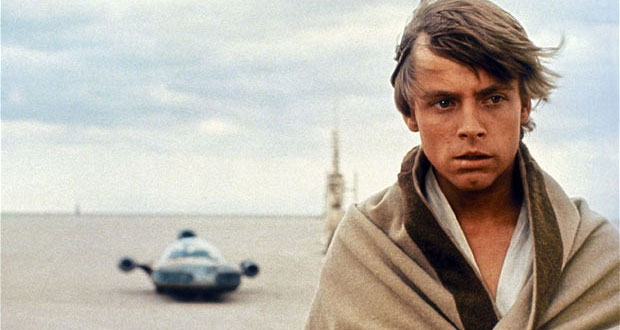 The film is spoiled with riches.  Science fiction has never seen a hero with as much swagger as Han Solo before Star Wars or ever since.  In a series light on female roles, Carrie Fisher doesn’t settle for being a diminutive princess and when her attempted rescue goes pear-shaped, she memorably loses patience with Han and Luke, grabs a blaster and shoots her own way out.  Her banter and chemistry with Harrison Ford is a highlight throughout the series.

The universe Lucas creates feels brilliantly authentic.  There was a time when practically every science fiction sound stage was sterile, sparse and minimalist in design.  Lucas’ vision of the galaxy far, far away is one that is dusty, rusty, held together with duct tape and has a genuine ‘lived in’ quality.  The alien creatures – from the mighty Chewbacca to the misfits in the Mos Eisley Cantina – all feel like recognizable metaphors for human personalities.

For my money, A New Hope is one of the best films in the series.  It isn’t saddled by the immense baggage that the franchise would eventually come to carry.  Instead, it is handsomely constructed as a sharp, lean spectacle that is dripping with charisma and outstanding melodrama from woe to go.  Nearly forty years on, the film is as good and as popular as it ever was.

Luke Skywalker joins forces with a Jedi Knight, a cocky pilot, a wookiee and two droids to save the universe from the Empire’s world-destroying battle-station, while also attempting to rescue Princess Leia from the evil Darth Vader.

Summary : The original that started it all is one of the most imaginative and exciting sci-fi films ever made.