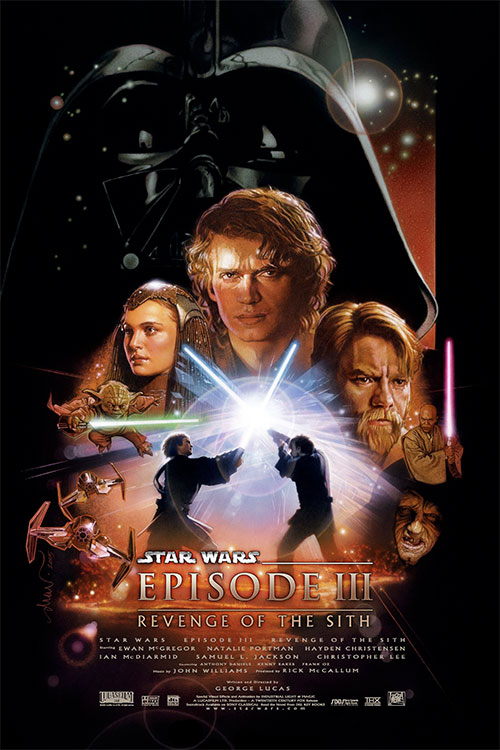 By the time audiences went in to see Revenge of the Sith, a strange and strained relationship had developed between Star Wars fans and George Lucas.

The first two films in the New Trilogy were a major disappointment.  Not only that, for any fan hoping to wash out the sour after taste of The Phantom Menace and Attack of the Clones by viewing the Original Trilogy on DVD were in for a rude shock.

The only copies that Lucas would make available for the home video market were updated ‘Special Editions’ that awkwardly shoe-horned new computer effects into the Original Trilogy.  There were a raft of unwanted creative changes such as Greedo shooting Han Solo first and a dodgy CGI ‘pasting’ of Ghost Hayden Christensen into the final scene of Return of the Jedi.  To this day, it is extremely difficult for any fan to purchase an untouched copy of the Original Trilogy.  Even the American Film Institute, which declared the original Star Wars film of 1977 to be one of the greatest American films of all time wasn’t sent an original copy of the film.  They were lumped with the inferior ‘Special Edition’ like everyone else.  The decision to restrict access to an untampered Original Trilogy felt like spite on Lucas’ behalf.

It was in this climate that we got The Revenge of the Sith, the final chapter in the story of how Anakin Skywalker turned to the Dark Side. 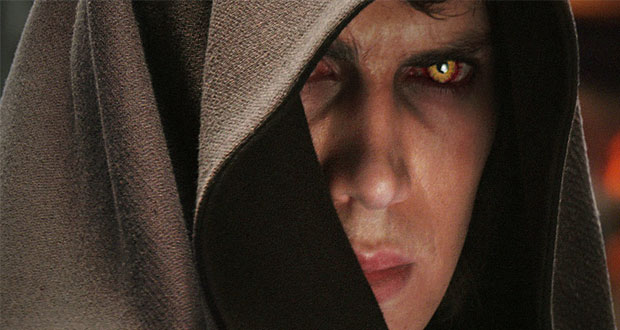 The film was a noticeable step up in quality from Attack of the Clones and The Phantom Menace.  If nothing else, it provided a great spectacle with exciting light sabre fights and entertainingly chaotic battles in space.  Thematically, it is comparable to the much loved Empire Strikes Back as the heroes have their backs against the wall and the villains, consumed by the Dark Side and assuming control of the galaxy, have their moment in the spotlight.

Hayden Christensen delivers a slightly improved performance here over his turn in Attack of the Clones.  The lines that he’s given are still pretty cheesy but the broader narrative of a despairing hero becoming corrupted by the Force is still compelling to watch.  Unfortunately, at the very last moment when his transformation into Darth Vader is complete – Anakin learns of Padme’s death and he drops to his knees and cries out ‘NOOOOOOOOOOOOOOO’ in one of the most unintentionally funny scenes ever to grace the silver screen.  Christensen never had another leading role in a blockbuster film again.

It’s been ten years since the New Trilogy.  Much has been written and discussed about its short comings compared to the Original Trilogy.  In many ways, I feel for Lucas because he is clearly aware of the backlash these films received from critics and fans alike.  With the Original Trilogy, Lucas provided the overall vision but it was then largely left to others to pen the screenplay and direct the films.  With the New Trilogy, Lucas became significantly more hands on with both the writing and directing duties and it felt like the films were worse off as a result.  That must be incredibly bruising to the ego and difficult to come to terms with.  Stars Wars became a story set in a universe that had a legion of fans who wanted the series to continue but wanted the creator to step away.

In 2012, George Lucas obliged and he sold the rights for Star Wars over to Disney.  When the project for Episode Seven begun, the producers declined to have Lucas’ involvement, despite his offers to help.

His services were no longer required.

Although I believe it was the right call, it doesn’t make it any less sad.

At least with Revenge of the Sith, he went out on a high note.  The film isn’t a patch on the quality of the Original Trilogy but it is a far, far better film than Phantom Menace or Attack of the Clones.

Director:  George Lucas Writer:  George Lucas Cast:  Hayden Christensen, Natalie Portman, Ewan McGregor By the time audiences went in to see Revenge of the Sith, a strange and strained relationship had developed between Star Wars fans and George Lucas. The first two films in the New Trilogy were a major disappointment.  Not only that, for …

Summary : Easily the best of the New Trilogy but still not a patch on the original films