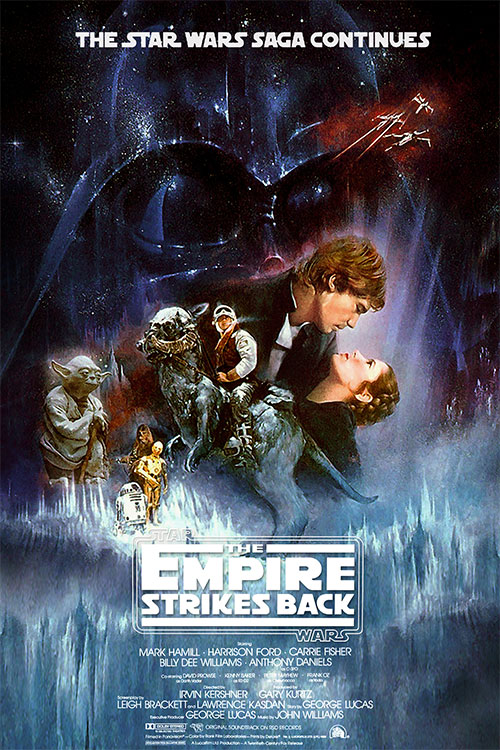 The Empire Strikes Back is often lauded as the finest film in the Star Wars series and with good reason.  The film built upon the foundations of A New Hope and expanded the lore of the Star Wars universe even further.  It delivered a famous revelation about Darth Vader’s heritage and had the confidence to end the film on a dark cliff hanger where the Empire regained its hold of the galaxy and the fate of Han Solo – frozen in carbonite and left in the possession of Jabba the Hutt – was left uncertain.

The Empire Strikes Back’s world building storyline might seem like par for the course in a modern context but in its day, it was a revelation.  Most blockbuster franchises of its time – Jaws, Superman etc – were very much a case of diminishing returns with each sequel gradually introducing sillier villains, more contrived storylines and smaller box office takings.  The Empire Strikes Back stood shoulder to shoulder with A New Hope in terms of quality and was clearly positioned as a middle chapter in a trilogy that trusted audiences would follow the narrative arc across three films.  Its serialized format paved the way for how film studios approach film franchises today.

Empire begins on the icy planet of Hoth where, after a brief interlude with an interplanetary yeti, Luke Skywalker joins the Rebel Alliance who are desperately try to hold out against the encroaching AT-AT walkers who are marching towards their base camp.  It’s a thrilling opening act that stands out as one of the best battle sequences in the series.  In the end, the Rebel Alliance is no match for the fire power of the Empire and they are forced to flee.  Luke and Han part ways with Luke searching for the old Jedi master Yoda and Han seeking the council of his old friend Lando Calrissian at Cloud City. 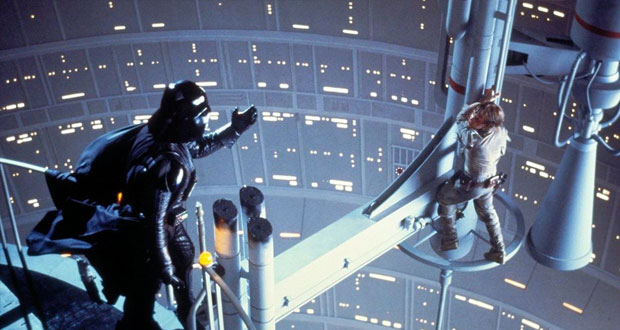 Things really don’t get a whole lot better for the Rebel Alliance in The Empire Strikes Back.  They are constantly thwarted and outmanoeuvred by Darth Vader and the bounty hunter Boba Fett at every turn.  Han is captured by the Empire and handed over to Boba Fett who intends to deliver him to Jabba the Hutt to claim a bounty.  Luke Skywalker finds the reclusive Yoda on the swamp planet Dagobah and after some convincing by the ghost of the late Obi Wan Kenobi, Yoda reluctantly agrees to help train Skywalker to become a Jedi master.

Luke cuts the training short when he has a premonition of Han and Leia in trouble and he travels to Cloud City to battle with Darth Vader.  Luke is soundly beaten and Vader lops off his hand with a light saber.  But not before delivering the most famous line in the series – “No, I am your father.”

The Empire Strikes Back is an important film in the Star Wars series because it allows the villains to shine and win the day.  In Empire, Darth Vader is a greater warrior than Luke.  Boba Fett outwits Han Solo.  If the trilogy of Star Wars films was about the Rebel Alliance blowing up three consecutive Death Stars I don’t think they would have worked nearly as well or have been as fondly remembered.  The catharsis we feel at the end of Return of the Jedi only works because of the ground work laid out in Empire. 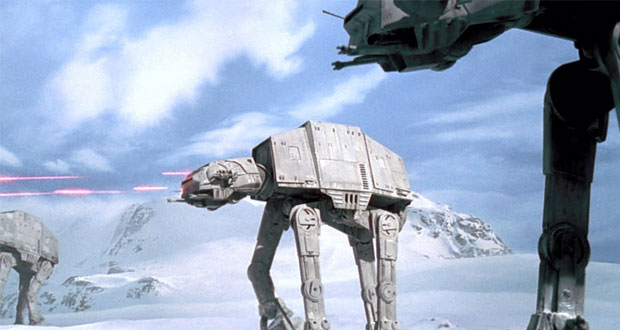 The Empire Strikes Back also sees some of the most significant character development in the series.  Luke’s rash and impulsive actions in this film lead to his defeat at the hands of Vader and he has to learn from this before confronting him in Return of the Jedi.  After being torn between Luke and Han, Leia chooses her man and develops a romantic relationship with Han (she dodged a bullet there).  Surprisingly, this sort of crucial character development is something of a scarcity in modern film franchises.  I can think of way too many film series (Pirates of the Carribean, Transformers to name a couple) where the lead character remains exactly the same from the first film to the last.

After the rebels have been brutally overpowered by the Empire on their newly established base, Luke Skywalker takes advanced Jedi training with Master Yoda, while his friends are pursued by Darth Vader as part of his plan to capture Luke.

Summary : The darkest chapter of the Star Wars saga is arguably also the best of the bunch.