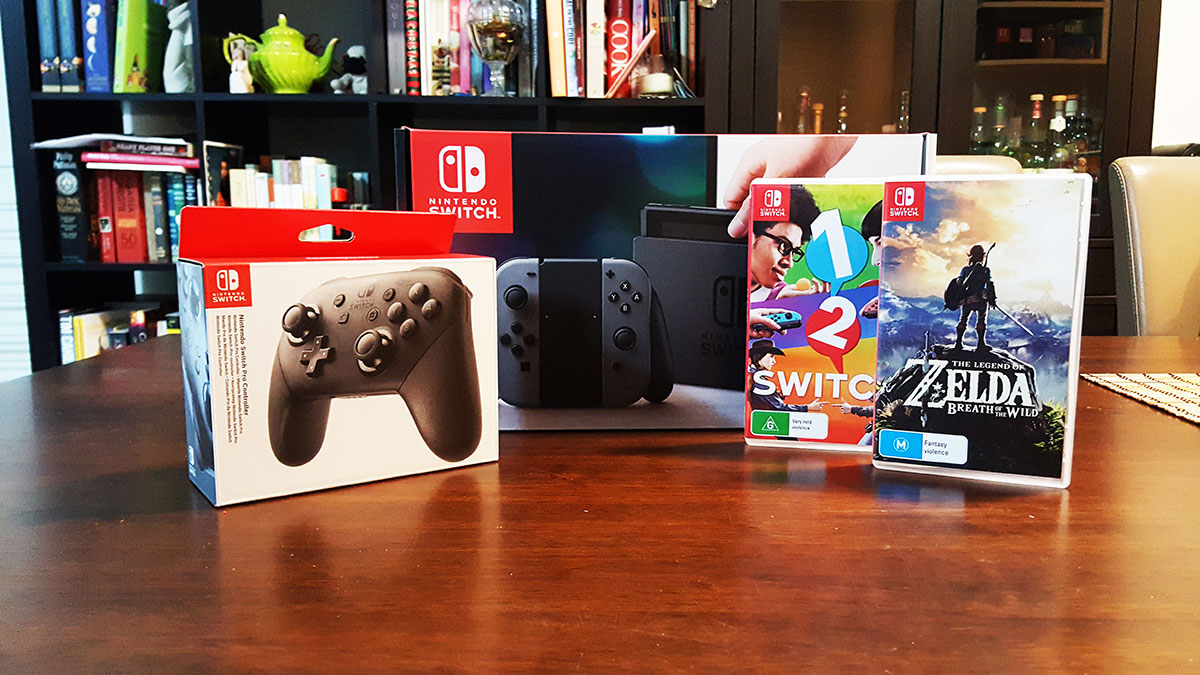 The Nintendo Switch is finally here!

For the last eighteen months or so, its felt like Nintendo has been absent from the video game landscape.  After the dismal sales of the ill-fated Wii U, Nintendo have had to pour their resources into this latest hardware and that has come at the expense of any meaningful software releases on the Wii U or the 3DS over the last year and a bit.  After such an absense, it’s nice to have Nintendo back at last.

Fans of the long-standing video game company are understandably nervous.  After the terrible sales performance of the Wii U, the feeling was that Nintendo couldn’t really afford to drop the ball with this new system.  Sure their portable 3DS system still sells a respectable number of units but even so, Nintendo’s once commanding ownership of the portable market had been eaten away by consumers shifting to mobile games on iPhone and Android devices.

Many felt that the Nintendo Switch was a make or break system.  Could Nintendo – a company so famous for their innovative yet introverted company culture – create a video game system that would find broad appeal with today’s market?

I bought a Nintendo Switch at the midnight launch on March 3rd and these are my first impressions on whether they have got it right. 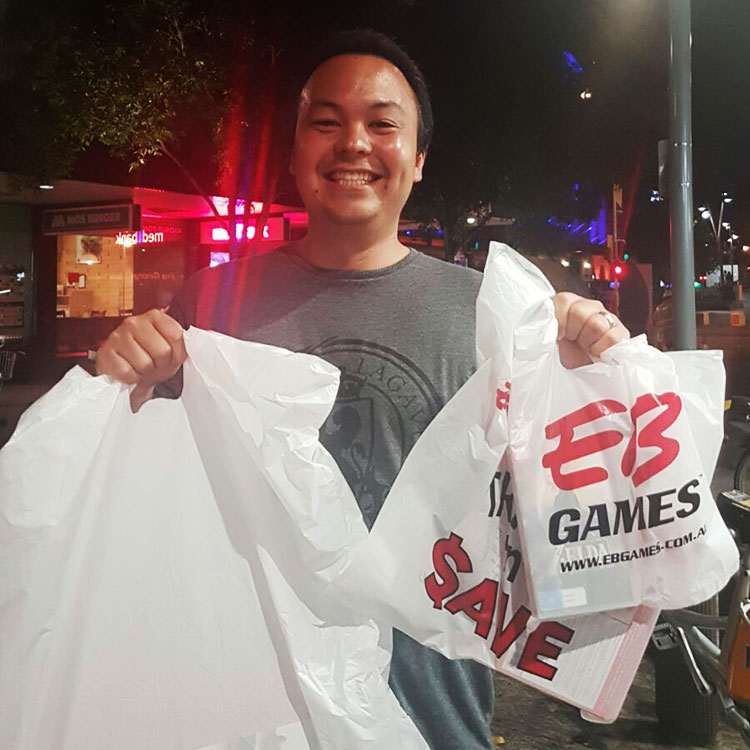 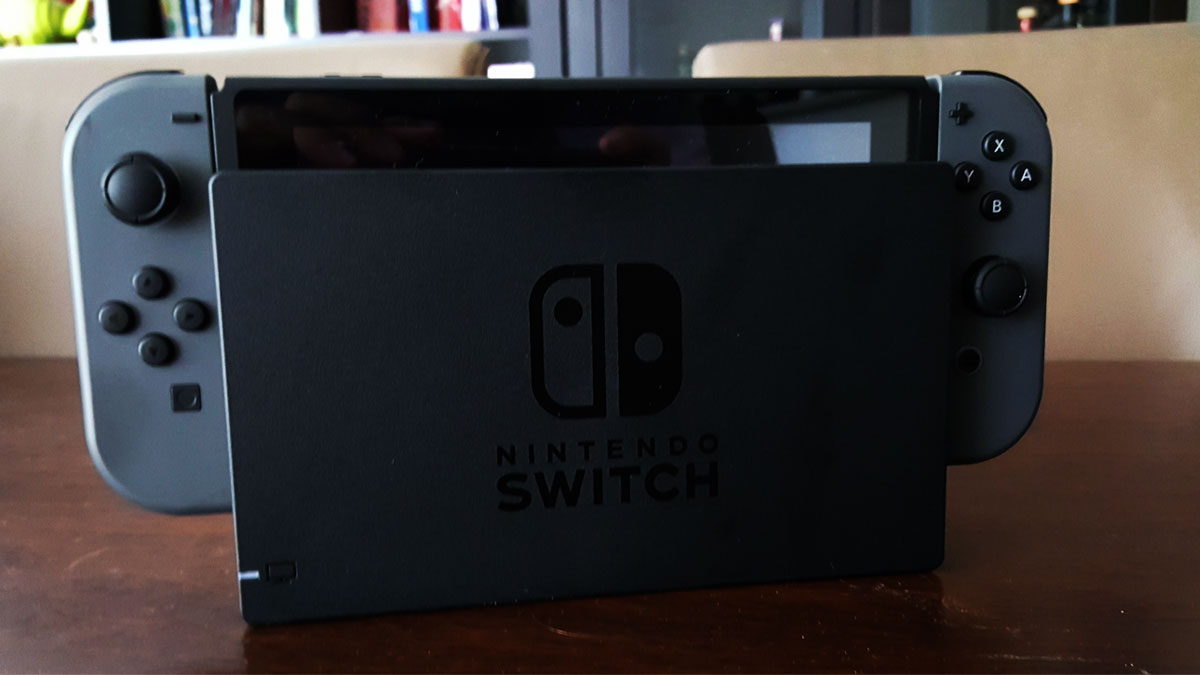 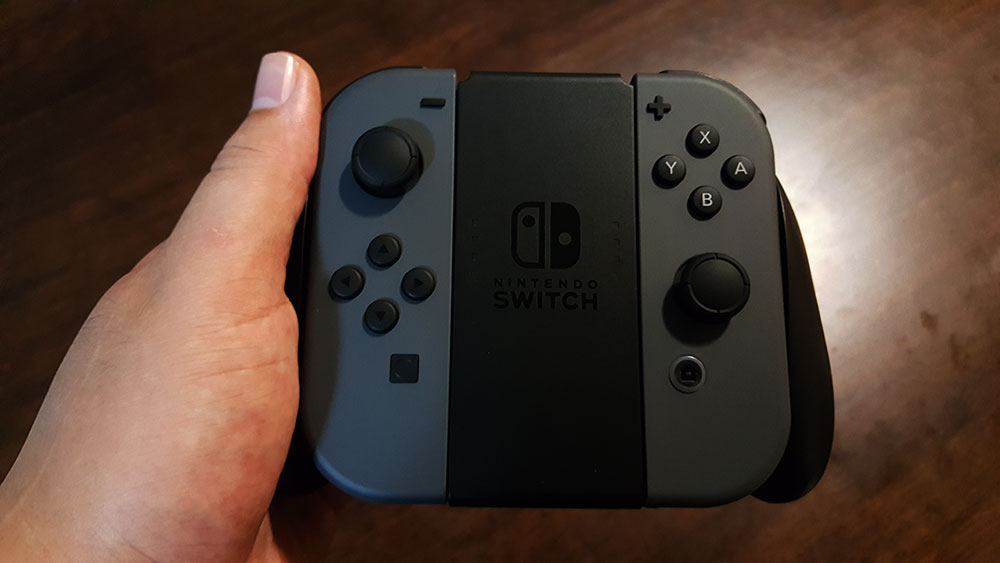 Nintendo have kept their cards pretty close to their chest with the Nintendo Switch, revealing the name and look of the hardware just four months before the launch of the system.  The first time I actually got to see and hold a Switch was the day I bought it.

On first blush, the Switch is smaller than I expected and the grey version of the system looks sleek and rather un-Nintendo like.  When I first unpacked the Joycons, my initial impression was that they were absolutely tiny and very lightweight.

The system can be played in a number of different configurations which is the key selling point of the system.  When the Switch is docked and played in Television Mode, the system can be controlled by connecting the Joycons to a Joycon dock (see image above).  It’s reasonably comfortably to hold but since I’ve bought a Pro-Controller, I don’t think I’ll actually play many games in this fashion.

When played in Tabletop Mode, the Switch can be propped up with a kickstand that is on the back of the device.  Conceptually, it’s pretty neat but annoyingly, the kickstand only has a single angle that it rests on.  It would’ve been nice if it could click into a couple of different viewing angles as I think you would be cranning your neck downwards if you were trying to play this thing in front of you on a plane ride for instance.

When playing games with the Joycons unlatched from the system (e.g. when playing 1 2 Switch), you can interconnect them with Joycon straps which are slender plastic attachments that are tethered to a wrist strap.  These things are surprisingly fiddly to connect together and I made the mistake of connecting one of the straps upside down and I damn near thought I would break the controller pulling them apart again.

Lastly, the Switch can be played in Portable Mode by attaching the Joycons onto the device itself and taking it out of the dock.  They interlock with the rails with a satisfying ‘click’.  I think the convenience of this mode (basically what the Wii U should’ve done all along) will be one of the big selling points of the system.  There’s nothing like playing a session of The Legend of Zelda:  Breath of the Wild on your tv, and then kicking on and playing a little more in bed before going to sleep. 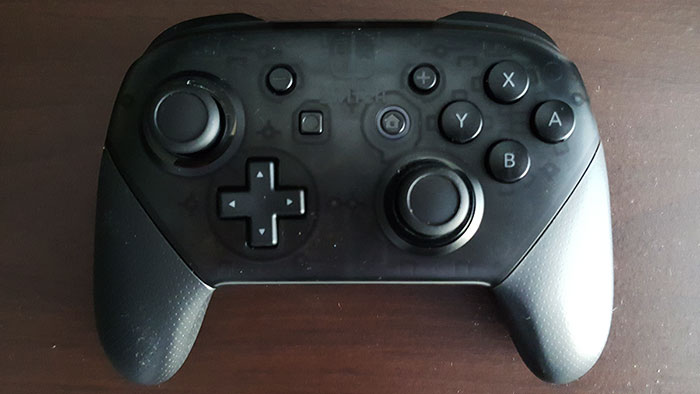 A quick word on the Pro Controller, which isn’t packed in with the system but is an optional accessory.  It is one of the most comfortable and well designed controllers than Nintendo have ever released and is a strong recommendation for anyone interested in the Nintendo Switch.  Hands down it will be the most enjoyable and recommended way to play traditional games in the vein of Legend of Zelda and Super Mario.  The Pro Controller is super satisfying to hold in your hands, the buttons feel very responsive and the battery life is impressive. 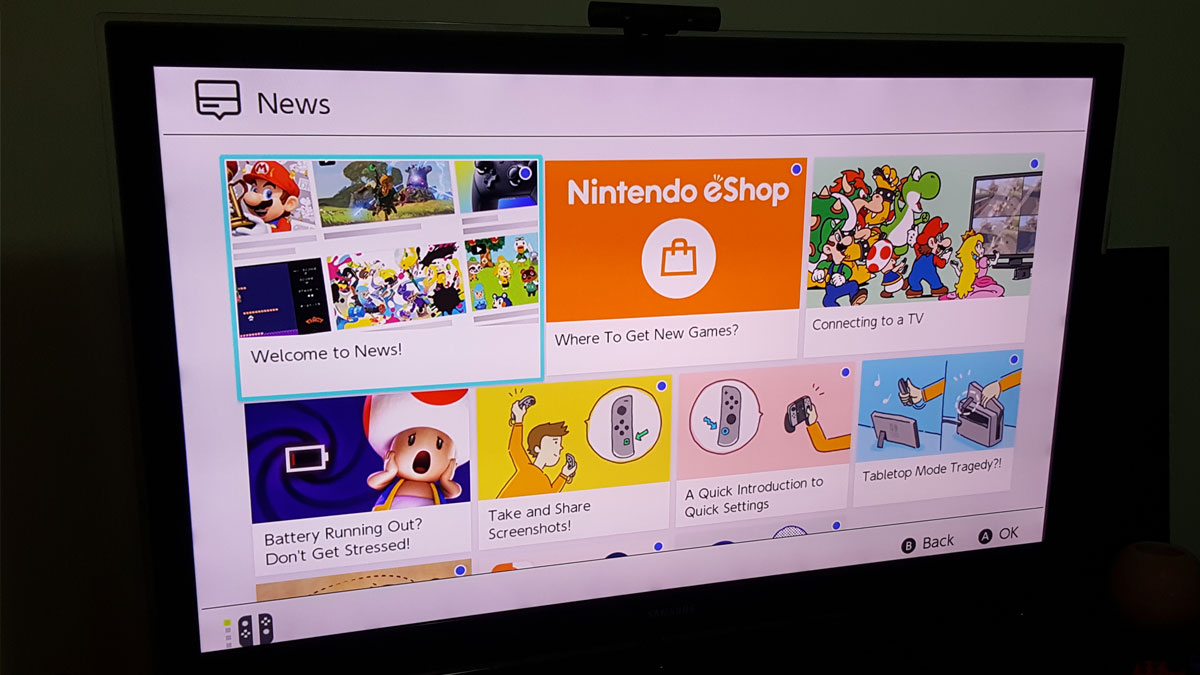 The interface for the Nintendo Switch is blazing fast and easy to navigate.  In other words, its a tenfold improvement over the wretchedly slow and cumbersome Wii U.

Having said that, Nintendo have explained very little about their online model other than the fact that it will be their first ever system that requires a paid subscription to play online.  We still don’t know anything about Virtual Console or what else we can expect features-wise.  The Mii avatars, so ubiquitous in their association with the Wii and Wii U, are gone.  Although billed in part as a portable device, the system also eschews the underappreciated Streetpass feature from the 3DS too.  In their place is….not much.  For now at least.

After the disappointing mismanagement of Virtual Console on the Wii U and 3DS, I would dearly love to see Nintendo return to form on the Switch and build a library that is at least the size of the Virtual Console store on the original Wii.  I’d like to see NES, SNES, N64, Megadrive, Neo Geo and many other systems emulated on here.  Most of all, I’d like to see the rumours of Gamecube games running on the Switch become a reality.

One huge positive about the Switch system and its online store.  It is effectively region free!  You can create multiple accounts based in different territories and download/buy games from other countries.  You can even do this using local credit cards.  This is a fantastic feature that Nintendo is to be commended for adding to the Switch. 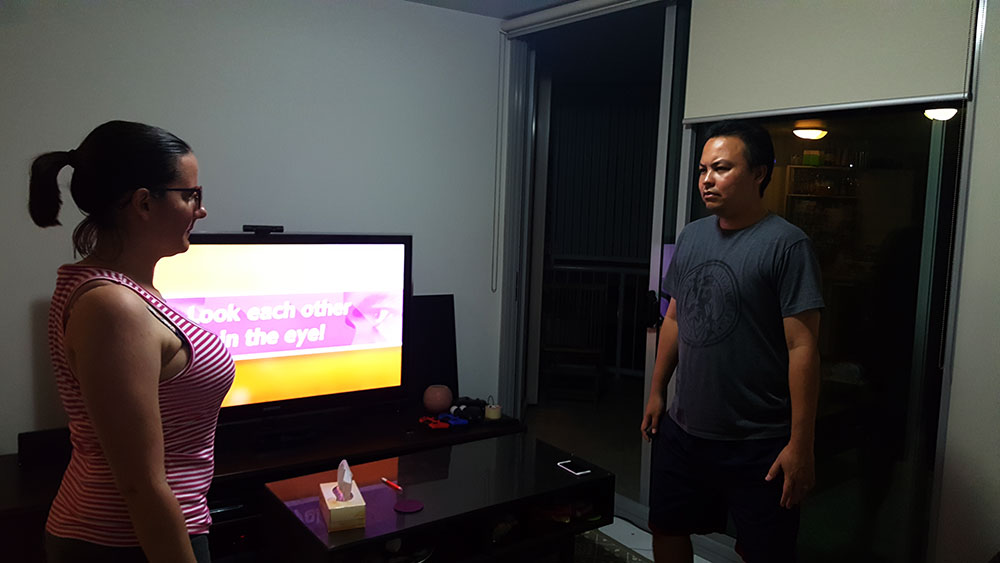 If I’m honest, Nintendo is launching this system in pretty bare bones fashion.  Sure Super Mario Odyssey is in the pipeline, as are hasty updates to Wii U titles Mario Kart 8 and Splatoon but on launch day, there is a pitiful collection of games available for the early adopter.

1 2 Switch, a mini game collection designed to showcase the features of the Joycon, is a polished but very slight piece of software.  It’s defining characteristic is that the games require players to make eye contact with one another, instead of the television.  It’s fun in short bursts but the games have no depth whatsoever.  As a showcase launch title, it’s certainly no Wii Sports.  It’s hardly even Nintendo Land.  I traded in my copy after spending a couple of days with it.

One recommendation I would make is to hit up with the Switch eStore and download Snipperclips.  This 2 player co-op game is great fun and is a terrific showcase for how the Tabletop Mode can be enjoyed on the Switch.  It comes with a free demo too so you can try before you buy. 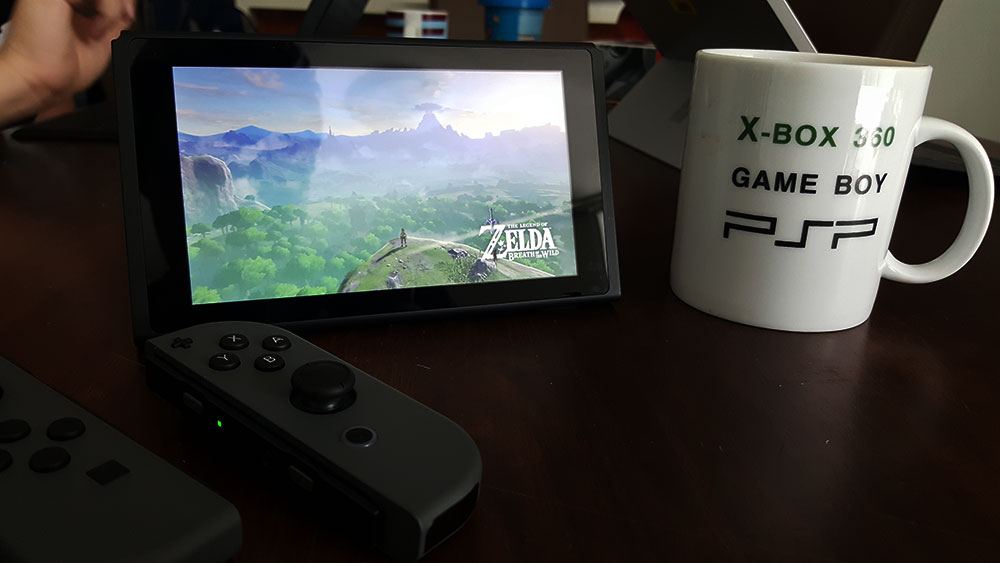 Of course what really makes the Nintendo Switch a must-have system in this early launch period is the latest iteration of their flagship series The Legend of Zelda.

It can be argued that Breath of the Wild isn’t necessarily the best showcase for the Nintendo Switch’s new hardware features.  The game doesn’t have any touch screen functionality.  It doesn’t make use of the Joycon’s ‘HD Rumble’ feature or anything like that.  This is pretty reflective of the game’s origins being developed exclusively for the Wii U.

Where the game does serve as a wonderful advertisement for the Nintendo Switch is that it is a compelling game to play and its easy to pour hours into a single session.  So the fact that you can flick between the Television Mode and Portable Mode in a couple of seconds is a feature that I think will get plenty of usage and appreciation from early Switch adopters.

Has Nintendo got it right this time with the Switch?

It’s extremely early days.  We know hardly anything about the system’s online features. Or what games are to come beyond the rest of 2017.  It’s not clear if major third party developers, who by and large have avoided Nintendo for several generations now, are willing to come back and develop for this new system.  Or whether Nintendo has it in them to rebuild a robust Virtual Console library.

Having said all that, I think this system shows plenty of promise and is in good hands.  It doesn’t look like it’ll set the world on fire and achieve the popularity levels of the Wii but it’s not a total bust like the Wii U either.  And I think thats enough.  As long as Nintendo can build a happy eco-system of enthusiastic and supportive gamers and a regular calendar of game releases, then I think the Switch will do just fine.

There’s a question mark over the reliability of the controllers (specifically some Joycon connectivity issues) but I think the central conceit of the system – a Nintendo device thats both portable and can be used as a home console, is an attractive proposition for many gamers.

The future looks bright for Nintendo and hopefully the bad old days of the Wii U are well and truly behind them.

Tagged with: 1 2 Switch Nintendo Nintendo Switch The Legend of Zelda

Previous: A Week In Wellington
Next: Beauty and the Beast