My parents bought me my first ever video game console for my eleventh birthday – a Super Nintendo.  You got a lot more bang for your buck back then.  It came bundled with two controllers and a free copy of Super Mario World, one of the greatest platform games ever made and surely one of the greatest launch titles for a system.  Since then I’ve gone on to purchase ten more gaming devices and the thrill of opening the box and trying out a new piece of video game hardware still remains.  Even when its for the Nintendo 3DS, a system that I was rather critical of when it first launched.

There seems to be a strange yet consistent curse in the video gaming industry.  Whichever company produces the dominant gaming platform for a generation inevitably gets caught up in their own hype and ends up losing significant marketshare by becoming out of touch with what audiences want and treating them with arrogance with their follow up product.  It happened before to Nintendo, it happened with Sony and once again, it appears after Nintendo shot to the top of the industry with the Nintendo DS and the Wii, they inexplicably launched an overpriced Nintendo 3DS without any good games or a complete online infrastructure.

Nintendo at the height of their recent arrogance don’t tend to do a lot of favours to gamers.  As a long suffering Wii owner who has barely had a handful of decent games to play in the last eighteen months I can attest to that.  However, a Nintendo that is desperate to win back a gaming audience that has left them in droves to play Angry Birds on the iPhone is a lot better proposition for me.  The console got a price cut, the online store is up and running and now we get a new mainline Super Mario game as well as Mario Kart 7 both being released within three weeks of one another.  When I received a couple of JB Hi-Fi vouchers through work, I decided to take the plunge. 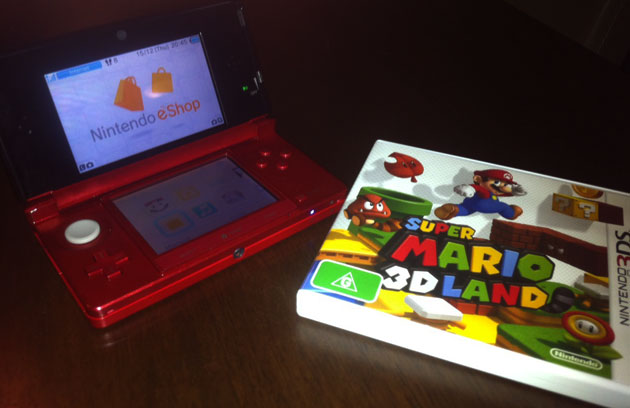 Well, having the first new portable Super Mario game in four years is a pretty awesome piece of software to experience for your first playthrough on the console.  I’ll write up a full review of the game soon.  Needless to say, this was the game that the console should’ve had on launch day.  It’s great fun, has a surprisingly deep amount of content and is a great advertisement for the device’s 3D capabilities.

What about the battery life?  I don’t know yet.  I’ve heard its pretty terrible.  Somewhere in the ballpark of 3 to 5 hours.  But then, so is the PSP and you can get extra juice out of the console by dimming the screening and switching off wifi etc.  I haven’t gone travelling with it and at home, it just sits on the docking station that comes with the console, permanently charging.  I’ve got a couple of business trips to Sydney coming up next year so I can put it to the test then.

As for the Nintendo 3DS’ UI, its a mixed bag.  I kind of wish they switched to using the iPhone style touch screen technology which I believe is heat-sensitive, not pressure-sensitive, and therefore can be easily navigated using your fingers.  But they didn’t.  Instead you’ve got the same type of touch screen as the original DS which means that its intended to be navigated using a stylus which nowadays feels positively archaic.  I like that the frontscreen is customizable though, just like the Wii menu screen, so you can move the digital download games and software that you use the most onto the front screen and store the other crap off screen.  I wish the new Xbox dashboard had this sort of customization.

One of the great strengths of the Nintendo Wii is the Virtual Console which basically gives you access to a large chunk of Nintendo’s impressive back catalogue of games for a few bucks each.  So even though the Wii didn’t really have as many good games as I would have liked, its still a handy system for me to own because it now stores all my favourite titles from the NES, SNES, Megadrive, N64 and Commodore 64.  I anticipate that the Virtual Console for the 3DS will also become one of its greatest strengths.  Even though its early days and there aren’t that many games available yet, its still awesome that I have a portable system that has Super Mario Land [1989], The Legend of Zelda: Link’s Awakening [1993] and The Legend of Zelda: Four Swords [2004, free!] all on the one device.  I look forward to Nintendo gradually releasing more from their catalogue of portable titles.

As for the graphics of the Nintendo 3DS, they’ve basically just caught up with the original Playstation Portable in terms of horsepower.  It’s hard to gauge having only played the one title but the graphical fidelty of Super Mario is a nice step up from New Super Mario Bros. on the original Nintendo DS.  While I didn’t really expect a Mario game to push the graphical power of the console since most of the gameworld is made up of simple shapes and textures, I was impressed by the scale and scope of what was happening on screen with some of the Bowser boss fights.  There’s probably going to be other games that get released in the near future that will be a better showcase for the console’s graphics – namely Resident Evil which currently has a reputation for looking pretty good and Metal Gear Solid 3 which apparently looks pretty rubbish graphically.  Time will tell.

And thats about it for now.  It’s early days and I’ve played one new title as well as a couple of old classics on Virtual Console.  I’m generally pretty happy with Nintendo 3DS and thats a big step up from earlier this year where I didn’t even have any interest in owning one.  Now lets see if the quality games keep coming.