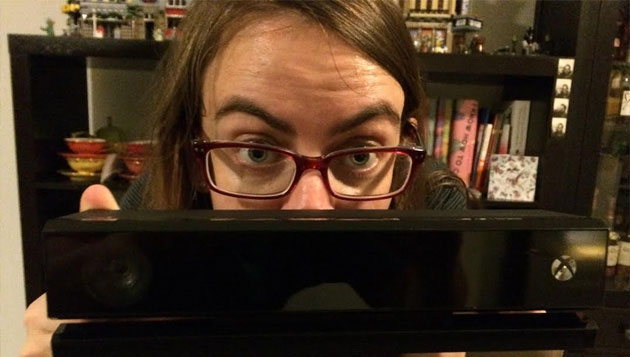 The video game industry has not been kind to the eighth generation of game consoles.  In the past three years I’ve written about the launch and my initial impressions of the Nintendo 3DS, the Playstation Vita and the Nintendo Wii U and all have had a somber and pessimistic tone to their prospects in the marketplace.  Today, each system has a decent catalogue of games and I believe are well worth owning but all three have sold dismally compared to their predecessors.

How then, does the Xbox One launch fare by comparison?

It will almost certain sell an order of magnitude better than the Wii U.  Having said that, its launch comes six months after one of the most mismanaged pre-launch build ups the industry has ever seen.  In a two month period, Microsoft has almost certainly squandered all of the good will that the Xbox 360 built up with console gamers over the last eight years.  The initial plan to have an ‘always online’ system that had a mandatory Kinect plug-in was an integral design component at the heart of the original Xbox One vision.  However, it received such a backlash from gamers that Microsoft spectacularly back-flipped on their plan a mere 30 days after the initial unveiling and ditched both requirements.

After faltering with their internet and plug-in requirements, Microsoft headed to E3 determined to make positive waves by focusing on the games.  They proceeded to trot out an uninspired assembly line of DudeBro shooters and then the next day, they had their asses handed to them by Sony who proclaimed that their graphically superior device would be $100 cheaper ($50 in Australia).  Ouch.

That was June and now its November.  What happened with the finished product? 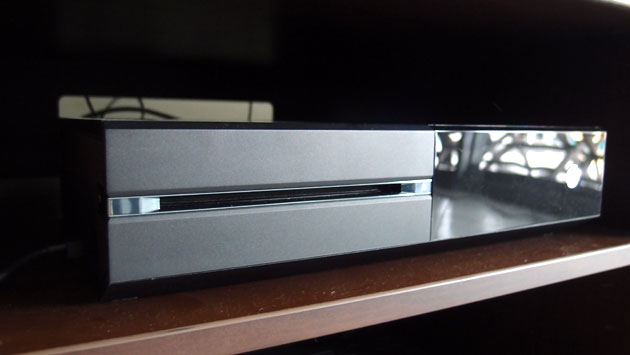 Lets start with the hardware.  The Xbox One is a chunky, boxy looking device that looks like a two tone VCR.  It’s ditched the lime green colour scheme of the previous two iterations of the Xbox in favour of a more understated monochrome finish.  It’s one of the most aesthetically uninteresting systems I can remember but I believe thats part of Microsoft’s intent.  This thing isn’t supposed to look like a game console.  It’s supposed to look and behave like an all-purpose entertainment unit.

The system now has a BluRay player and an HDMI-In port which is part of Microsoft’s big plan to dominate the living room by having you watch all your entertainment through this one device.  Hence the name.  Those are the most noteworthy changes that come to mind.

I don’t know enough about the technical specs of the graphics engine or the memory in this system but suffice to say the games do look better than 360 games and even lazy launch titles developed across multiple systems like FIFA 14 have little graphical tweaks and features that make it stand out from its predecessors.

The system comes with 500gb of internal memory which initially sounds like a lot (particularly compared to the Wii U with its miserable 32gb memory in the ‘Deluxe’ model) but I quickly realized that I’d run out of room in the fridge pretty quickly.  Every game now has a mandatory installation and some of the early games this generation are already gobbling up 30gb of space.  Not even factoring in games downloaded off the Xbox Marketplace, you’d think this equates to the system holding room for about 15 games or so but that number scales back rapidly if you had any intention of downloading videos, music or apps which the system is, y’know, constantly trying to get you to do.  Looks like installing and uninstalling games constantly will become the norm for most gamers after the 12 month mark. 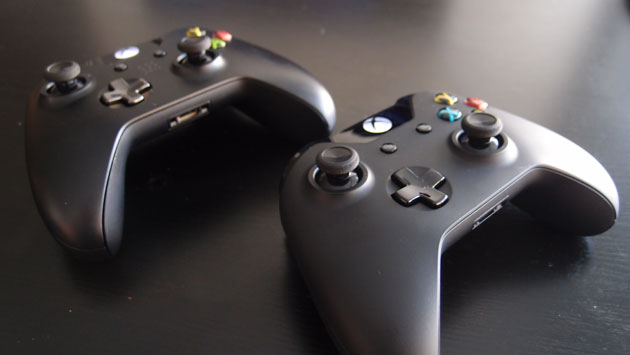 The controller is one of the best things about the Xbox One.  It is a subtle refinement over the Xbox 360 controller, which already was the best in market for the previous generation.  The analogue sticks have been refined for better grip and sensitivty.  The triggers now have force feedback.  The front-facing diamond layout of ABXY has been brought closer together and in fact the entire unit has shrunk slightly in size.  Lastly, the DPad has been given a much needed overhaul.  In short, the best controller in video games just got better. 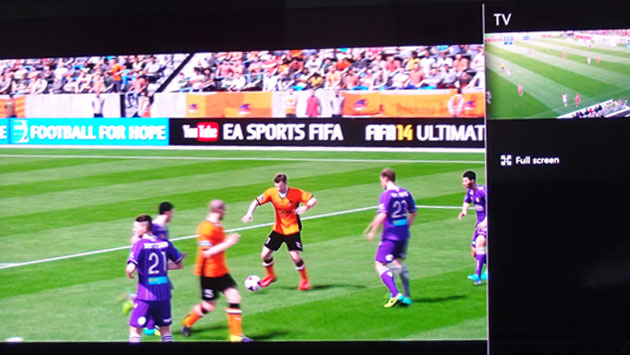 The UI for the Xbox One has been drastically dialed back in complexity compared to the Xbox 360’s current Metro interface.  It’s been designed to look like the Windows 8 tile interface and has far fewer layers of hierarchy to reach the content you’re after which is a good thing.  It’s also capable of multi-tasking which doesn’t sound like much but its a potentially revolutionary concept for a game console.  It’s kinda neat to be able to flick between playing a game, having a Skype conversation or watching television.  And thanks to the ‘Snap’ function, you can do these things at the same time.  In the screenshot above, I’m playing FIFA 14 whilst keeping an eye an actual game of football being aired on Foxtel.  It’s a pretty handy feature which I can see myself regularly.

The UI does seem to be designed with voice commands in mind.

Initially, I was pretty disappointed with this because my first impressions were that the voice commands flat out didn’t work.  But there’s a learning curve.  After I began to memorize the commands I began to feel a lot more familiar with the quirks and idiosyncrasies of the voice recognition software.  Even though my natural tendency to play a game would be to say something like ‘Xbox…play FIFA 14‘, you actually need to say ‘Xbox go to FIFA 14‘.  If you say ‘Xbox, play FIFA 14’ it actually tries to play FIFA 14 as a song in the music store.

You also don’t need a pregnant pause between saying Xbox and then verbalizing your instruction.  It’s far more likely to understand you if you say ‘Xbox, watch tv’ as opposed to ‘Xbox….watch tv’.

Once I became familiar with the commands, I could quite comfortably switch between regular gaming, watching television, or utilizing picture-in-picture.  Whats interesting to keep in mind though is that although I’ve now had much greater success in using this interface the Xbox One remains obstinate in taking instruction from Jen.  For whatever reason, it struggles to understand even the most basic commands from her, even with the room dead silent and Jen clearly enunciating her words.  There’s probably a joke in there comparing the Xbox One to marriage somewhere.

As it stands, it’s not uncommon at the moment to hear one sided conversations coming from our lounge. 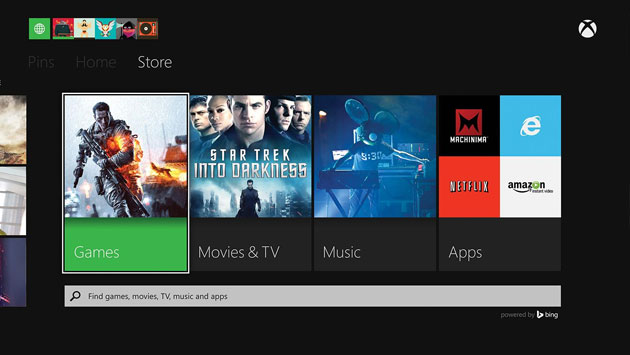 The Xbox 360 was active in the games market for eight years, one of the longest lifespans of any console generation.  You wouldn’t know it looking at the Xbox One store.  It looks like it was cobbled together and rushed to market.  The thing is a barren wasteland that is bereft of content and what little that is there is gives plenty of pause for concern.

On the Xbox 360 marketplace, game demos were mandatory and there was a healthy range of downloadable indy titles available in the launch window (in fact Geometry Wars was one of the best games available on the system on Day One).  By comparison, the Xbox One store has no demos.  There are no indy games.  All the retails games are going for full price.  There are no trailers for upcoming games.  And every single game is trying to sell you micro-transaction content.  It’s absolutely putrid.  I remember with the 360, the demos and trailers were a great way to learn about upcoming games or try out games that I might end up buying if I enjoyed.  There’s nothing like that on there at the moment. 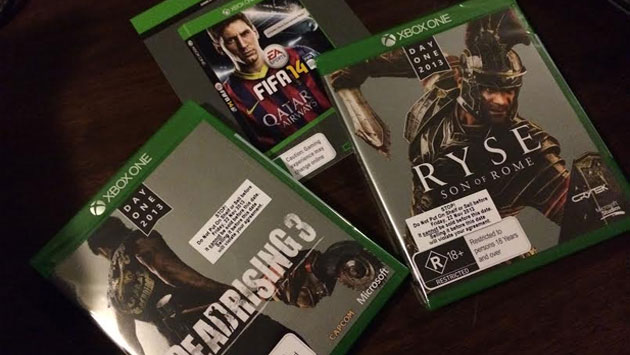 The launch line up for the Xbox One is safe and conservative.  There is no industry game-changer like Wii Sports or Halo here.  Instead you get FIFA, NBA2k, Call of Duty and Assassin’s Creed 4.  Of all the launch titles, Ryse is by far the most interesting.  It is the most graphically accomplished game for the system and its a new IP.  The game launched to poor reviews from the games press but I think they’re being overly harsh.  My full review will be posted next week but my assessment of the game is overwhelmingly positive.

But that’s about it.  At least until TitanFall in March.

My thoughts overall?  Not bad.  Could’ve been better.  The longer term prospects are definitely unclear.

I have no doubt that the system will eventually be home to dozens of great games which is what I want from the device first and foremost.  Microsoft has the support of enough third party developers that the Xbox One will be a modest commercial success.  Thanks to its dreadful PR in the last six months however, I believe Sony will be the runaway leader in the marketplace on a scale similar to the Playstation 2 and Microsoft will be back to having marketshare that is comparable to the initial Xbox.  They’ll be fighting for second place with the Nintendo Wii U.

While I don’t doubt the potential for good games down the road, I do have concerns about Microsoft’s ability to deliver on its vision for creating a single all-purpose media hub.  I’d actually like that and want them to succeed.  As someone who currently has to switch betwen an Xbox 360 (streaming PC content), Playstation 3 (BluRays), Foxtel (live sport) and an Apple TV (movie rental service), I’d love to have a single box deliver the functionality I get from all these other separate devices.

To date, all of the media demonstrations of the Xbox One have been based around American content.  We don’t have a prospective date for when we’ll get a One Guide for Foxtel.  Or a Fantasy League app for Australian sporting leagues.  Disappointingly and inexplicably, the Xbox One doesn’t even stream media content off Windows 8 PCs.  We presume that these feature will come later on but why not have them ready for launch?  For those reasons, the system currently falls well short of its design aspirations and intentions and there is no clear ETA on when the rest of these features are coming.  It could be weeks, months, years or not at all.

I was never one of the people who were vehemently against the always online requirement.  I think it would’ve brought a much needed point of differentiation to the Xbox One and the Playstation 4.  If these two devices end up in a similar situation to the 360/PS3 where ninety percent of the games are the same, look the same and play the same, then its the gaming community that loses out.

Although the new Kinect sensor is greatly improved over the 360 iteration, I don’t believe its motion controls will be a point of focus for Microsoft.  They are still too clunky and haphazard to ever become a core component of games.  I think they’re wise to hedge their bets on the voice control technology instead.  Even its simple and understated implementation in games like FIFA and Ryse show a much more feasible path to use the technology.