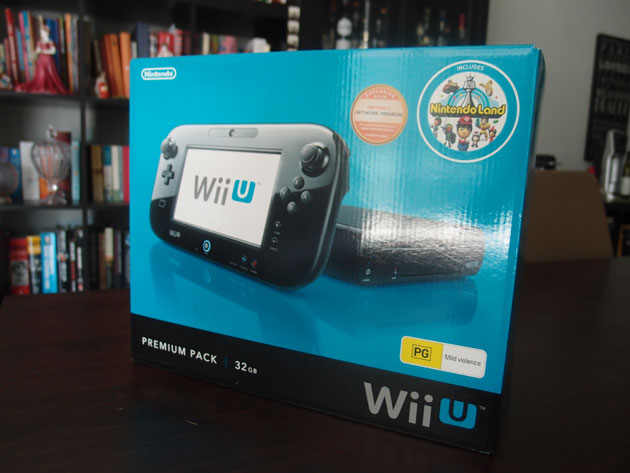 Meet the New U

Even as an adult, I still feel a giddy excitement for the launch of a new video game console.  There’s an extra layer of nostalgia that you can add on top of that when it’s a Nintendo system.  It’s been six years but here we are with the Nintendo Wii U, the successor to Nintendo’s monstrously popular Wii console.

Let’s cut straight to the chase.  The marketing and pre-release hype from Nintendo has been awful.  I remember the buzz around the original Wii which managed to get mainstream media attention, casual gamer interest and famously sold out in stores across the world in its first year.  That was 2006.  Fast forward to today and I don’t think your Average Joe knows what this thing is or even cares that it came out yesterday.  It’s all part of the strange modern gaming landscape which has doomsayers predicting the death of game consoles as we know them, made redundant by a cheap and saturated market on smart phones and free-to-play web browser games that are rapidly increasing in sophistication. 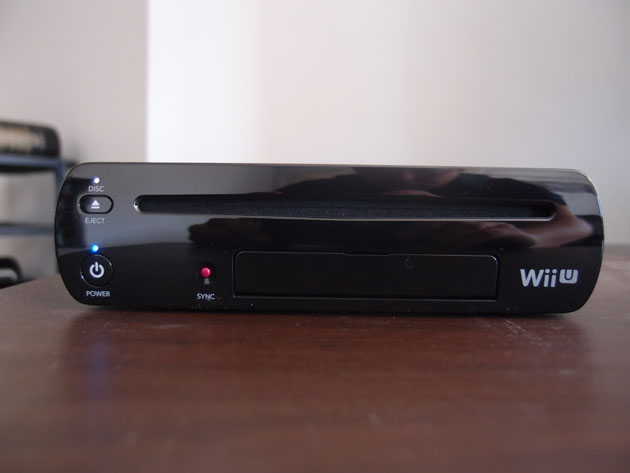 Time will tell whether the skeptics are right.  I hope they aren’t.  I dabble with the occasional game on my iPhone but my great preference is for traditional game consoles in the fashion that Nintendo created with the NES back in 1987.

Out of the Box

I picked up the Wii U Premium Bundle which means it comes in a sexy black glossy finish, a miniscule 32gb hard drive and the game Nintendo Land bundled in.  I think it also comes with a bunch of extra cables that you don’t get with the Basic Pack.  While I like the look of the new console, it’s form factor isn’t quite as striking as the original Wii and it doesn’t come with a stand.  You just lie it down like the picture above.  I don’t know what the white console is like but the black one is an absolute dust magnet.  Anyone with OCD will fight a losing battle trying to keep this thing free of fingerprint marks and dust. 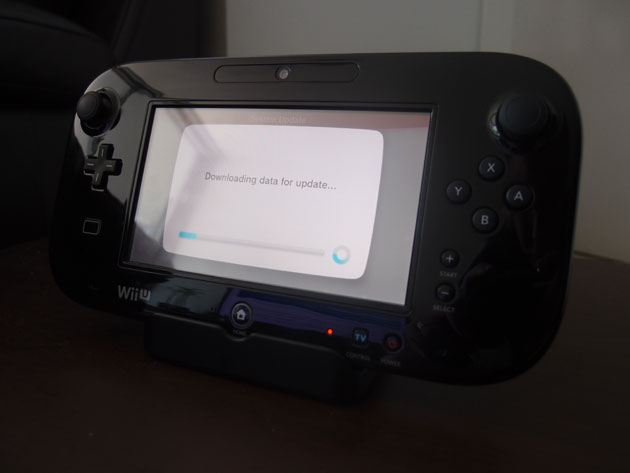 The Gamepad looks like quite an appealing piece of tech from a distance, particularly when its sitting in its charging cradle but up close, it becomes apparent that this thing is rather plasticky and has a cheap, resistive touch screen instead of the heat sensitive Multi-Touch style that we’re used to with smart phones.  It’s a cost cutting measure but after spending some time with the Gamepad, I think its fine.  The touch screen is responsive and there’s a stylus for when you need greater precision.  It’s also light and fits very snuggly in my hands.

The system also comes with the world’s largest power adapter which rivals even the Xbox 360’s Giant Brick of Doom.  At least if an intruder breaks into your house and tries to steal your Wii U, you can defend yourself and bludgeon your assailant with the power adapter.  The thing is a beast.

For launch titles, I picked up New Super Mario Bros. U and Zombi U. 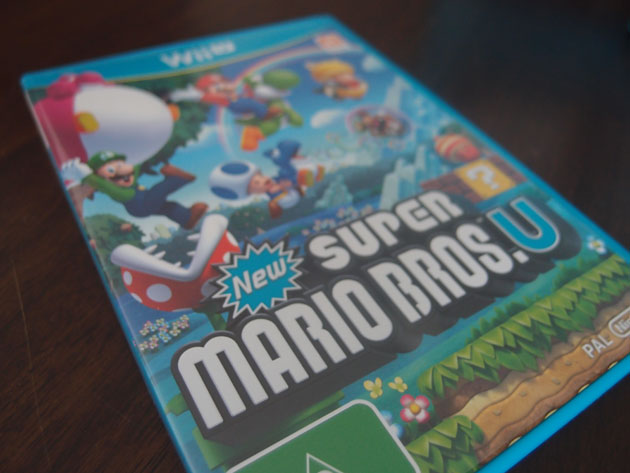 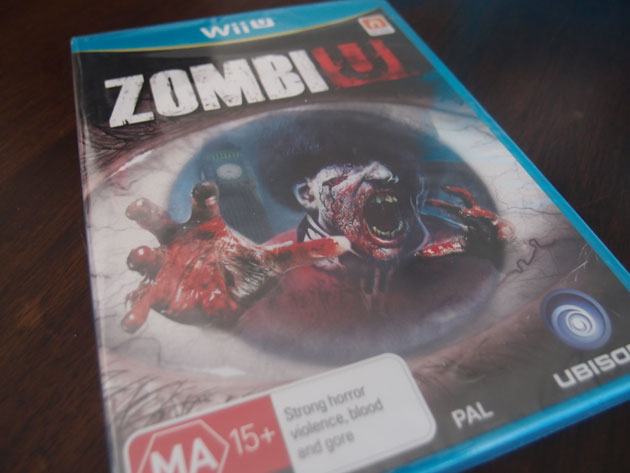 The appeal of the original Wii console was very well communicated from Day One and even before its launch.  It offered gestural-based gaming that was widely accessible to players, whether they were experienced gamers or not.  With the Wii U, I think its a more complicated message.

On the Wii U, every single game is playable not just on the television but on the screen embedded into the GamePad.  The Wii U doesn’t require the television to be on or for you to even be in the same room as it to play games or mess around with its other features (Youtube, web browsing, media streaming etc).  You can do all that on the GamePad which has about a 10 metre radius in which it can receive a signal from the console.

This probably sounds rather underwhelming but I have already put it to use and find it enormously appealing.  During the afternoon, I played a few levels of New Super Mario Bros U on the Gamepad while my brother-in-law watched the cricket on TV.  Later that night I browsed the Wii U message board and added some friends onto my online profile whilst lying in bed.  Eventually, the Wii U will add a streaming media service which can be used through the Gamepad so you can watch movies, television and live sports too.  The portability and functionality of having a tablet-sized device that can act as a hub for games and media is very appealing.  Technically, if you own an iPad you can sort of do something similar but right now, the Wii U is the only way to do it and play gaming mainstays such as Super Mario, Call of Duty, Mass Effect on a portable screen anywhere in the house. 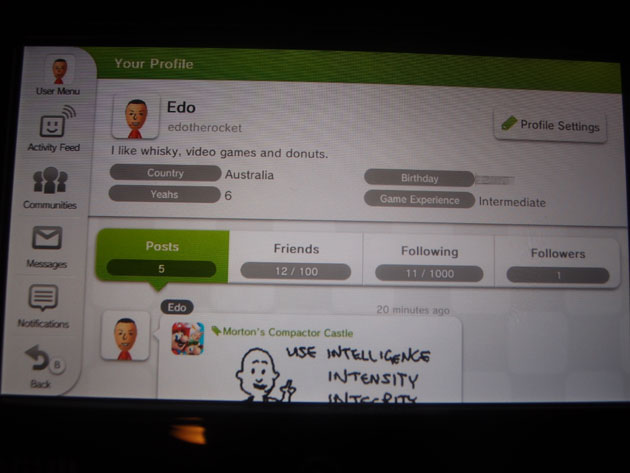 The other thing that I’m particularly taken with is the long awaited transition for Nintendo into high definition.  It’s sort of a similar thing with Apple and how they add features to their phones years after the competition but somehow turn it into a new feature.  There’s nothing new about high definition gaming of course.  We’ve had it with the Xbox 360 and Playstation3 for six years.  But we’ve never seen Nintendo franchises like Mario in high def before and seeing it for the first time, it looks fantastic.  The graphics in New Super Mario Bros U are ridiculously lush and vibrant.  The shading and character art I think subtly crib from Pixar’s animation style which is no bad thing.  I cannot wait to see how Zelda, Metroid and Donkey Kong will turn out over the next few years.

The one final thing that I am enjoying so far is the integrated message board.  Consider this – the vast majority of new game releases are available on every console so what sets them apart is the console’s UI and community.  In the past, I almost always bought non-exclusive games for the Xbox 360 over the Playstation3 because I had more friends on Xbox playing multiplayer, I preferred the Xbox’s UI and little things like cross-game chat and their GamerScore system made it a more appealing option.  With the Wii U, every game has a dedicated message board where you can discuss the game, ask for help when you get stuck or general talk about your experience.  All of this is moderated in a painstakingly manual process by hundreds of Nintendo staff.  And so far its working.  Incredibly, I haven’t come across a single swear word or crudely drawn image in my whole time using the Miiverse.  Instead people are friendly to one another and helpful.  The majority of posts are either funny, informative or just inoffensive fluff.  If Nintendo can keep the Miiverse clean and constructive, it’ll be quite a big draw card for me to play non-exclusive games on their system.

Lastly, it seems Nintendo has finally caught up with Microsoft and Sony and got a halfway competent online system.  You pick a Nintendo Network ID (NNID) and you can add friend requests at a touch of a button.  Welcome to 21st Century online gaming Nintendo! 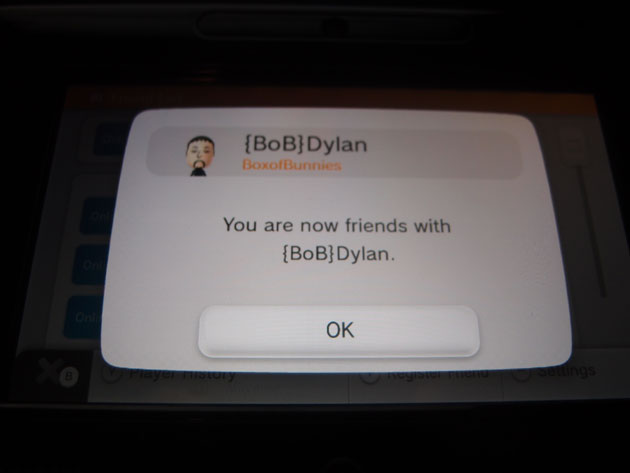 I like the Wii U so far.  I like it a lot.  And that’s without having had a chance to play a whole lot of games yet!  I love the concept of the Gamepad and I think ‘un-tethering’ a video game console from the television is a stroke of genius.  I’m also happy that the core game controller is a lot more conventional that the Wii remote was for the Wii.  There’s 2 analogue sticks, four face buttons and four shoulder buttons.  I hope this means I can expect some decent third party games from developers scared away by the stark number of inputs available on the original Wii.

I think its a given that Nintendo’s games on this thing will be of their typically high standard (Super Mario Galaxy and The Legend of Zelda:  Skyward Sword are some of my favourite games last gen) and they will finally look the part in high definition.  I’m intrigued to see how the Miiverse develops but the ambition on Nintendo’s part is surprising.

There’s no way this thing sells as well as the original Wii but regardless, I think Nintendo have done a good job at addressing the criticisms of the Wii and have added a whole slew of interesting innovations that help set them apart from Sony and Microsoft’s offerings.

Here’s to the Wii U having a bright and rosy future!