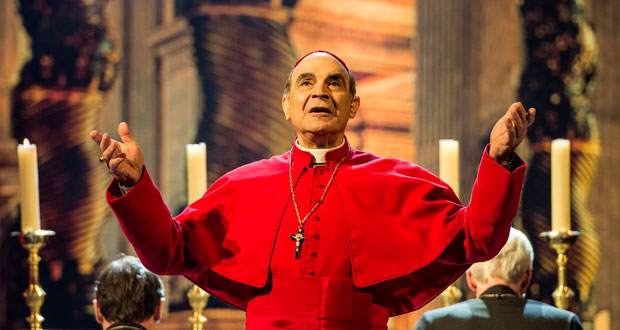 This week I was fortunate enough to watch one of my favourite actors since childhood – the indomitable David Suchet – perform at QPAC in Jonathan Church’s production of The Last Confession.

The show is a two hour mystery thriller about the curious election of Pope John Paul I in 1978 and his unexpected death just 31 days into his reign.  Suchet plays the role of Cardinal Benelli, a proud and influential man in the conclave who we meet at the start of the film writing a confession on his death bed.  Benelli is a good and just man but he is wracked with guilt and before he meets his maker he tells his story to The Confessor.  We travel back in time and witness the events unfold as Benelli recalls them with brief interludes as he exchanges words with The Confessor.  The show is laid out like a Vatican version of A Christmas Carol in that way.

The story begins at the end of Pope Paul VI’s reign.  Paul has been the Pope for fifteen years but he is filled with remorse during his final days as he laments the inaction and lack of progress made by the Catholic Church during his reign.  He feels gridlocked by the Vatican Council which is conservative, corrupt and primarily concerned with maintaining the status quo.  The Council refuses to condemn dictators in South America or communists in Russia for fear of alienating cardinals in these regions.  They are financially involved with an unscrupulous American businessman named Bishop Marcinkus, a character inspired by Michele Sindona, a man with mafia ties who served as the Vatican’s financial consultant.  Marcinkus sells the Vatican Bank at an undervalued price in exchange for dubious favours for the church.  As society began to rapidly change and liberalize in the Seventies, the Council remain steadfast in maintaining their views, condemning the first child born via artificial insemination.  Only a lone cardinal, Albino Luciani, vocalizes his support.  The Pope shares his concerns with Benelli and he proposes that the burden of responsibility to move the church forward fall on Benelli.  Benelli declines.

When Pope Paul VI passes away and the conclave gathers to elect the next pope, Benelli influences the voting blocks of the Africans, the South Americans and the liberals to elect Luciani.  Unambitious and unsure why he has been given the seat of power, Luciani reluctantly accepts the nomination and becomes Pope John Paul I.  This move infuriates the conservative cabal of Cardinals Baggio, Felici and Villot.  After manufacturing the Pope’s election, Benelli fully expects to be made Secretary of State but is too proud to ask for the position.  Instead, he opts to leave Rome, knowing full well that he is leaving Pope John Paul I amongst hostile enemies in the Vatican.  Pope John Paul I turns out to be even more liberal than anyone expects and when he faces constant stonewalling and insubordination from the conservative establishment of the Vatican, he strips Baggio, Felici and Villot of their positions and re-assigns them.  The next morning, he is discovered dead.

At this stage, Benelli returns to Rome, determined to uncover the truth behind the Pope’s death.  He is convinced of foul play and demands an autopsy.  He begins interrogating the cardinals one by one and transforms into Giovanni Benelli: Vatican Detective.  The QPAC theatre and I were thrilled and mesmerized watching Suchet clad in religious garments, working his best Hercule Poirot routine and busting people’s alibis.

To be honest, before I saw The Last Confession I knew nothing about John Paul I’s reign and it was Suchet’s name on the marquee that drew me in.  However, once the story unfolded I began absorbed by this morality tale that blends fact with fiction, humour with melodrama and political brinksmanship with spiritual reflection and introspective soul searching.  Roger Crane’ script is a wonderful, layered parable that asks questions that are theological, sociological and moral.  What does it take to become elected Pope?  Can a man really hold the qualities desired of the supreme pontiff when you must navigate the political minefield that is the conclave?  Do you ask questions and seek the truth or have unquestioning faith in your God?

The Last Confession may sound like heavy subject matter for a Wednesday night out but there is plenty of witty and sardonic humour to lighten the proceedings.  I found the sarcastic tone of the comedy reminded me of Stanley Kubrick’s classic film Dr Strangelove, especially when I heard lines such as “the election of a pope is no place to discuss theology” and “religious has no place entering politics”.  I believe both lines were uttered by the sensationally corrupt scoundrel Cardinal Baggio.

I found The Last Confession to be a highly entertaining, thought provoking and challenging stage show.  Its anchored by a wonderful performance from David Suchet who is every bit the captivating presence that I hoped he would be.  His mannerisms and delivery commanded the audience’s attention and age has not diminished his talents one bit.  The show has now been performed in the UK, America, Canada and Australia to critical adulation and raving audience reviews.  If you get a chance to see this show, take it.  You’ll see in Suchet, a legend of both the stage and screen, working in his prime.

Previous: TV Show Round Up: Summerslam 2014 Review
Next: The Last Of Us Remastered