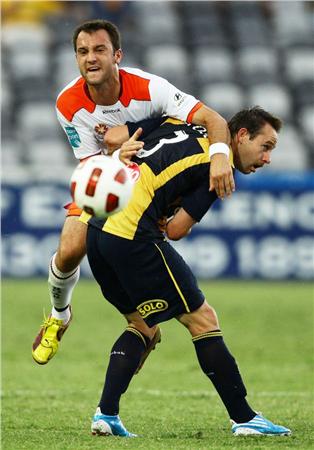 The Roar went on the road on Sunday.  This was the game to break the record.  If the Roar could secure a win or a draw against the Central Coast Mariners, they would claim the record for the greatest undefeated streak in the A-League.

I watched this game at an Irish pub on the Sunshine Coast with my Uncle Russell who was visiting from Aberdeen, a die hard football supporter.  He’s been a season ticket holder for the ‘Dons for thirty years.  He even has his name engraved on the tiles in front of Pittordrie.  I was curious to hear his thoughts on the quality of the league.

The Roar went up three nil in the first half hour of the game, effectively killing it dead as a contest before halftime.  Solorzarno netted a double, taking his personal tally to nine for the season and putting him joint top scorer in the league alongside Paul Ifill for the Wellington Phoenix.  Mitch Nichols scored the third.

In the second half, the Mariners got one back after a blatant offside goal was allowed.  It didn’t stop the Roar though.  They eventually netted a fourth through a Reinaldo tap-in after Broich did all the work.  Then finally in injury time, the Roar rubbed salt in the wound when an attacking opportunity lead to an own goal from Mariner captain Alex Wilkinson.

‘They’re nae bad, are they?’ remarked Russell, when I asked him about the Roar.  He said it was a shame that there seemed to be less people attending the game than a second division Scottish league match but he enjoyed the quality of the football itself.

The Roar claimed the league’s undefeated streak in emphatic fashion and have seriously set back the Mariner’s aspirations to win this year’s competition.  Adelaide United also won on the weekend however and remain in touching distance.

Next up, a Friday night clash against the Melbourne Victory. 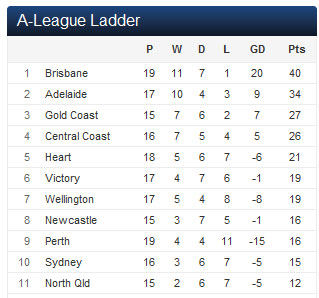 Previous: The Ashes Game One – Brisbane
Next: Harry Potter and the Deathly Hallows Part I