Posted by: Edo in Film December 7, 2010 Comments Off on Monsters 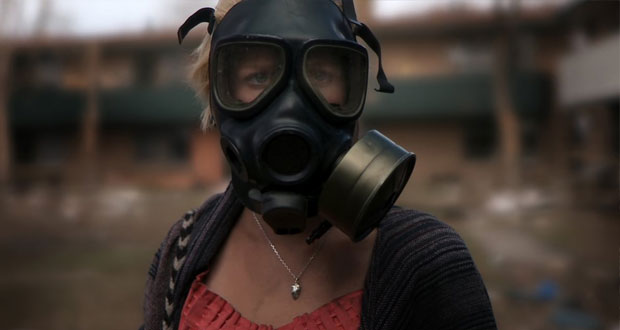 Monsters is a road movie set in the near future which has seen the arrival of spindly octopedal aliens from outer space that have taken over Mexico. There now exists a gigantic ‘Infection Zone’ buffer between America and The Rest of Mexico which is kept apart by the erection of a giant concrete wall.

We are introduced to our two companions, Andrew and Sam, right from the get go. She’s the heiress of a media tycoon who is looking for safe passage back to America to reunite with her fiancée. He works for her father as a journalist and has been assigned the job of being her escort back home.

The two immediately hit it off and have a chemistry despite their different backgrounds. Andrew is a bit of a wise-ass and it isn’t long before he’s having a crack, working his one liners on Sam. She turns him down but is coy and flirtatious with him.

After a final night out on the town results in Andrew getting their passports stolen, the pair are unable to arrange a ferry journey to America and instead must face a dangerous trek by land through the Infected Zone. It’s not made clear why Sam can’t just call her dad to transfer some extra cash into her account to bribe her way past the ferry crossing but maybe in the future, Mexico stops having ATM machines and besides, there wouldn’t be a movie otherwise.

The rest of film documents their journey through this perilous land as they travel by day and at night do their best to avoid the killer aliens. We see them bond through this harrowing experience and see their relationship blossom.

If I had one critique of the film it’s that the journey doesn’t seem particularly perilous nor all that harrowing. This is in spite of the fact that other people are killed during the trek and the aliens are portrayed as unstoppable killing machines. I think director Gareth Edwards could take some notes from Steven Spielberg on how to heighten tension in scenes where your protagonist is hiding from a deadly creature. One scene in Monsters is particularly evocative of the scene with the T-Rex attacking the car in Jurassic Park only just when you think things are about to get really tense, Edwards cuts away to the next scene.

Otherwise, this is a pretty amiable and enjoyable film overall. The real life couple of Scoot McNairy and Whitney Able have some great chemistry together and despite the occasionally clunky line of dialogue, they remain likable and good company.  There’s a bit of social commentary thrown in about media journalism and border security thrown in for good measure but the primary focus remains the bond between the couple themselves. You might not be expecting a romantic road trip from a film called Monsters but that’s what you’ll get and chances are, you won’t be too disappointed.

Summary : A strong debut film from Gareth Evans that is greater than the sum of its parts thanks to a strong screenplay and two excellent leads.