I can already imagine Mike snickering at the headline about a “major semi”. 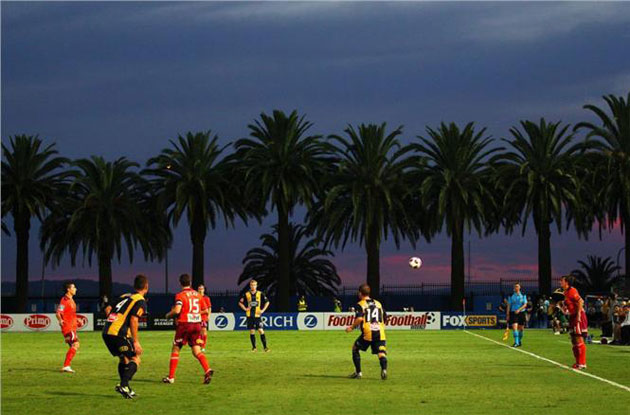 It’s Finals Football time in the A-League and there’s been plenty of talk this week amongst A-League football fans but unfortunately, most of it hasn’t been about the action on the field.  The controversy that has everyone buzzing started when a Victorian police superintendant Rod Wilson stated in the Herald Sun that he felt football fans were the most violent of all sporting codes in Australia and that the situation is so bad that some police officers are reluctant to work the venues.  This was some disasterous PR for a league that has had some disappointing crowd attendance figures this season.

It’s also an utterly ridiculous statement that couldn’t be further from the truth.  I’ve been to dozens of football, NRL, cricket and rugby union games in my time and I don’t think I can ever remember seeing anyone get ejected from a football venue for anti-social behaviour.  Comparatively, most cricket games I’ve been to have an almost continuous procession of drunken yobbos getting escorted out of the stadium.  It’s just so far removed from the reality of the situation that I don’t even know where this guy is coming from or, more intriguingly, what his motivation could be for coming out with such an unwarranted public attack on the game.

As it happens, media support is something that the A-League is sorely lacking and will need to turn around if it is to increase the profile of the game in Australia.  The quality of the football itself has never been higher and there is some wonderful talent coming up through the ranks and we are beginning to see it now with the number of A-League alumni now plying their trade in major leagues overseas as well as in the current Socceroos lineup which has gone from having just a single A-League legacy player to five.

The problems don’t just lie in negative press coverage such as the Victorian police story.  It’s also proving to be problematic getting positive coverage too.  When the Brisbane Roar won the Premiere’s Plate, the resulting coverage in the local tabloid The Courier Mail was a measley half page article six pages deep in the paper.  The backpage headline was instead given to a charity NRL game.  The local supporters club responded by unfurling a giant Courier Fail banner at the final game of the season.  Amusing, but it doesn’t help the profile of the club or the A-League itself.

Former Socceroo’s player Craig Foster is a very vocal advocate and servant for the game in Australia and he’s gone on at length about how the league currently lacks the ambassadors it needs to give them a clear direction, set of values and a mouthpiece to defend the code when it comes under fire.  It’s telling that as an A-League fan, I have absolutely no idea who the head of the FFA is.  In a troubled season such as this current 2010/11 season, it would be a lot more reassuring if there was a public figure representing the league who could discuss why the Sydney Rovers club didn’t get approved to join the league, what the FFA is doing to address the financial woes of clubs such as the North Queensland Fury and what the future of the game holds.  Will the A-League get any kind of free-to-air coverage?  Will it be in the form a weekly highlights show or maybe an FA Cup style knock out tournament?  This has all been speculative talk over the course of the season but we haven’t seen any of it get addressed in an official capacity.

There will be plenty to reflect on for the players and fans of the A-League at the end of this season.

Meanwhile at Gosford Park, the Brisbane Roar played the Central Coast Mariners in the first of a two-legged clash to determine who would qualify and host the grand final of this year’s competition.

After an evenly matched first half which saw the Mariners come the closest to scoring when they had a shot strike the woodwork, it was Brisbane Roar who gained the ascendancy in this fixture.  They secured a valuable 2-0 away win with second half goals coming from Kosta Barbarouses and Matt McKay.  The second leg will be played at Suncorp next Saturday.  Meanwhile, the undefeated streak stretches to 26 games.