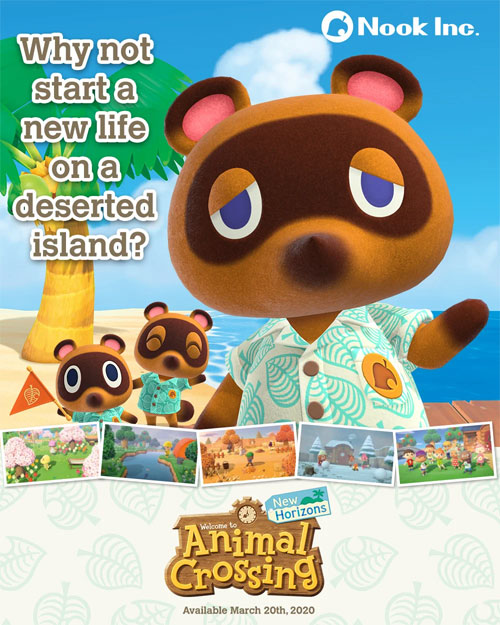 Every now and then, a game comes along at just the right time, offering just the right type of gameplay that clicks with audiences, that it becomes something more than just a video game.  It transcends the medium and becomes part of the cultural zeitgeist of the time.  Think of Pac-Man arriving in America at the height of the popularity of arcades in the Eighties.  Or Nintendo single-handedly revitalising the home console market with Super Mario Bros. on the Nintendo Entertainment System.

In 2020, during a historic and world changing pandemic that has forced the entire planet into self-imposed lockdown, Nintendo had the serendipitous good fortune of releasing Animal Crossing: New Horizons in March, just as the severity of COVID-19 restrictions really kicked into gear.  Animal Crossing is famous for its relaxed, stress free gameplay where players are encouraged to while away long hours fishing, catching bugs and socialising with their friends.  It was the perfect game for this moment in time.

This latest version is a substantial iteration on the Animal Crossing formula, incorporating new customisation options for clothing and furniture, first seen in the 3DS spin-off Happy Home Designer.  Thanks to the ability to scan in your own textures, images and artwork, its never been easier to make an island or a home that is truly your own.  It has also turned this game into a living, breathing meme factory as its massive online community has produced all kinds of satirical recreations of real and pop culture locations.

It’s a game that can be played for dozens, if not hundreds of hours.  For the uninitiated, Animal Crossing operates on a real time clock, changing from day to night and from weekday to weekend just as you do in real life.  The inclusion of timed seasonal events like Bunny Day and Earth Day throughout the year seem likely to keep Animal Crossing at the forefront of the video game landscape for months, if not the rest of 2020. 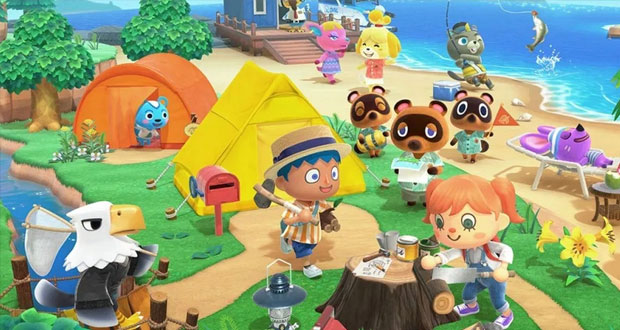 After putting in nearly sixty hours in the first month since the game’s release, I’ve come to really admire the meticulously designed play mechanics and gameplay loop that make Animal Crossing so successful at luring players back day after day.  New Horizons starts at a much slower and more methodical pace than its predecessors which threw you into a populated and fully constructed community from the get go.  In New Horizons you literally start on an island that is nothing but tress and stone with just two companions.  Once the game teaches you about crafting and resource gathering in those first 2-3 days it gradually introduces new concepts to the player over the next week or so.  This includes the various collectables in the game (fruit, fossils, bugs, fish) and items you can spend with your hard earned money (furniture, clothing, houses in the neighbourhood to accommodate new residents).  All of this is funnelled through the game’s longstanding custodian Tom Nook, a soft spoken raccoon who has a ferocious business acumen that keeps the player almost permanently swamped in debt.

The secret sauce that makes the Animal Crossing formula sing is that it gives the players a ton of goals to achieve (attracting fun residents, expanding your home, finding rare collectibles) but it leaves it completely up to the player which tasks they want to pursue.  The player is never, ever penalized in the game.  If you change your mind about where you want your home, you can relocate.  If you decide you don’t like the features of your island you can customize it by demolishing hills or reshaping entire rivers and waterways.

It is also a game that exudes charm with its colourful, minimalist art style and cleverly written dialogue for the residents who can be anything from exercised-obsessed rhinos to neurotic night owls.

In a series that has existed for nearly two decades, New Horizons is the definitive game in the series.  It has never been bigger, more customizable or easier to share with friends.  There are small annoyances that emerge once you put in dozens of hours of playtime (the crafting and online are especially cumbersome) but these pale in comparison with the overall product.  In an absolutely disasterous and gloomy year that has delivered relentlessly bad news day after day, its nice to have a game like Animal Crossing to distract from our troubles.  It is an absolutely wonderful, crowd pleaser of a game and couldn’t have come at a better time.

Tom Nook is back and he’s invited players to visit his tropical island and make it their new home.

Summary : This latest version of Animal Crossing is the best yet thanks to the introduction of new customisation and online features. A game that offers literally hundreds of hours of cheerful, stress-free entertainment.