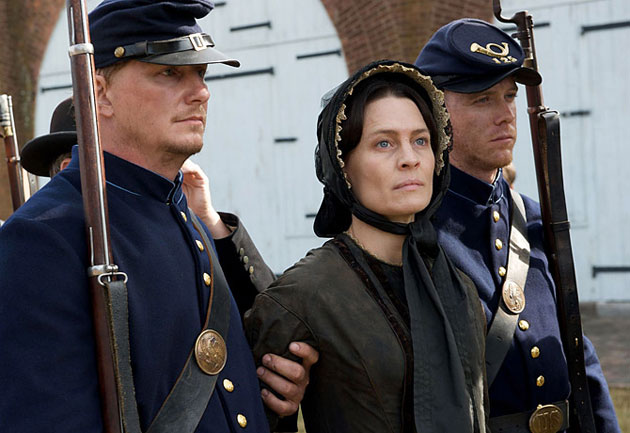 Mary Surratt – “Do you think you can win this case?”
Frederick Aiken – “No”

I’ve seen few films that present a more straight forward proposition than Robert Redford’s latest work The Conspirator which examines the trial of Mary Surratt, the lone female conspirator charged with aiding the assassins who murdered Abraham Lincoln.  Surratt ran a lodge that regularly accomodated Lincoln’s enemies who used the location to plot his death.  As part of the flurry of arrests that followed Lincoln’s death, Surratt is charged along with seven others of conspiracy to murder the president.  Although the killer himself, John Wilkes Booth, was tracked down and shot in a matter of days, the American government is shown in this film to understand the political importance of carrying out a trial with any co-conspirators so that they may be publically brought to justice as a warning to any other Confederate sympathizers.

The film breezes through the actual assassination rather quickly and focuses primarily on the court case.  A retired solider and aspiring defence attorney Frederick Aiken, played by James McAvoy, is assigned to the case.  Initially skeptical of Surratt’s innocence, Aiken quickly realises that this a kangaroo court and no amount of reasonable doubt will shake the prosecution from reaching a guilty verdict.  Since they have the money and influence, witnesses also change their testimonies at a whim and the judge threatens to hold Aiken in contempt when he questions the legitimacy of the trial.  As I said earlier, this is a straight forward film with no twists or surprises.  It is apparent that Surratt will be executed and Aiken can do nothing about it.

With The Conspirator, I had the feeling I was watching a made-for-television drama whose primary function was to be shown to history classes.  It is single-minded in its content and contains few frills or flair.  We learn little about Lincoln, his actions as president or the perspective of his detractors.  All we see is Surratt’s case get ripped to shreds and Aiken’s growing disenchantment with it all.

I’m not sure I can really recommend this film to anyone unless you have a particular interest in Lincoln beyond the average individual.  The content of the film strikes me as being information that could be communicated just as effectively via a couple of paragraphs in a Wikipedia article and it would give you all the information you need.  We don’t really learn much more about Surratt or Aiken by the film’s conclusion.  We just know they’re in an impossible situation that can only be drawn out for so long.

I guess we’re supposed to be upset at the injustice of Surratt’s plight but I found I couldn’t muster the effort.  I’m not sure whether thats a failing on the film’s behalf or just my cynicism regarding the matter – the government tried and wrongfully convicted a woman that was connected to John Wilkes Booth?  It just doesn’t seem terribly surprising.

This is a bleak and downbeat historical film.  It presents the court case in workman-like fashion and moves along to a glum, inevitable conclusion.  Are there parallels between this film and contemporary government corruption?  Probably.  Did I need a two hour soapbox reminding me of its existence?  Probably not.

Summary : A rather dour and dull adaptation of a kangaroo court case. Not Redford's best work by a long shot.

Tagged with: Robert Redford The Conspirator 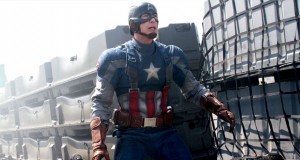