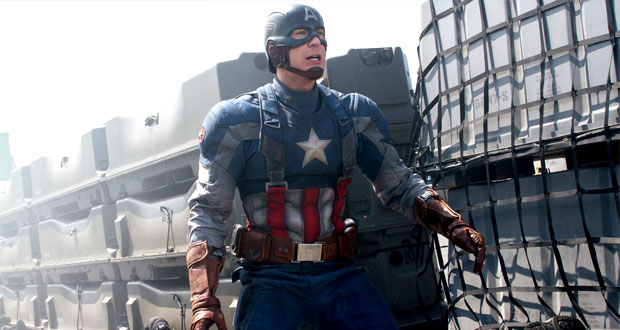 Captain America: Winter Soldier is the latest superhero film to hit the big screen and the ninth installment in the Marvel Cinematic Universe.

In this latest chapter of the Captain’s tale, Steve Rogers continues to struggle adapting to life in the 21st century.  All of his friends and associates from his teenage years are either dead or dying.  He keeps a checklist of recommendations from Black Widow on things to try in the modern era (Tim Tams, AC/DC, Steve Irwin are some of the items in the Australian edit of the film) and tries to stay upbeat but even military combat, the one thing his superhuman body is built and designed for, is changing and turning into shades of grey in ways that flummox the poor Captain.

War is not what it once was.  There are corporations involved.  Clandestine pre-emptive strikes.  Skirmishes with insurgent groups, not wars with nation states.  Nick Fury, the one eyed leader of the government espionage agency S.H.I.E.L.D reveals plans to operate three enormous helicarriers to enforce an American lead peacekeeping force across the world, known as Project Insight.  Rogers is mortified.  Fury tells him to keep up with the times.

Considering the pace that Marvel produces these MCU films (they’re coming in at 2 to 3 per year), it is a credit to them that they have been able to attain a reasonable measure of quality with each individual film and that they have given each hero enough personality and thematic identity to keep each production from feeling too ‘samey’.  If anything, probably the worst of the original MCU films was the first Captain America film and happily, Winter Soldier is a noticeable cut above in terms of quality.

The film is definitely at its best in the first half where the espionage and government conspiracy angle gives Winter Soldier an almost Jack Ryan-esque thriller feel to it.  There is a sequence which seems inspired by the video game Metal Gear Solid 2 where Captain America and Black Widow board an oil tanker and covertly wipe out the soldiers on board.  The Captain believes the mission is to rescue some hostages.  Black Widow knows her remit is to secure a valuable memory stick that has classified information.

The combat in this sequence is pure comic book cheese but it is still downplayed greatly from the building-shaking beat ’em ups that we saw in The Avengers.  It gives Winter Soldier a unique feel and fits a lot better with the more grounded storyline about government accountability and the ethics of omnipresent surveillance and pre-emptive drone strikes.

When Nick Fury is attacked by a convoy of militia men, lead by the mysterious Winter Soldier, it becomes apparent that there is a mole in the S.H.I.E.L.D agency that plans to subvert the power of Project Insight.  Captain America, Black Widow and Nick Fury go ‘off the grid’ and in a race against time, they must find out who is leading the coup detat and stop them.  It’s a classic espionage movie set up and all the ingredients are there for a fun, super-spy thriller.

If you felt as though there’s a ‘but’ coming, there is.  Winter Soldier reminds me a lot of the film X-Men: First Class which came out three years ago.  First Class was set in the Sixties, had a globe-trotting spy theme and evoked the look and feel of Connery era Bond films with gorgeous girls and clever gadgets.  It did this for 80% of the film.  In the final act, the film goes to pot and everything turns into spaceships, ‘pew pew’ guns and dumb one liners.  It was a disappointing revert-to-type at the last minute.

Similarly, Winter Soldier loses its bundle in the final act.  What starts as an espionage thriller that is grounded, clever and contemporary, ultimately ends up in Saturday morning cartoon territory.  It’s as if the hand of the producer suddenly rested on the director’s shoulder and reminded him that there were toys that needed to be sold.  For all the restraint shown in the opening stanza, the film ends with a near 30 minute barrage of gunfire and for all the grounded realism of the first half of the film, it all ends with a guy who jumps out of a window and into a helicopter which leans sideways so the guy can avoid the blades and land unharmed.  Really.

There was another film that came out recently, The Lego Movie, where it is revealed that the events taking place were being controlled by the imagination of a ten year old boy.  I’m pretty sure the last 30 minutes of Winter Soldier are lead by the same kid.

It’s not quite enough to spoil what is mostly a fun super hero film.  It’s just a jarring and disappointing tonal shift that seems increasingly inevitable no matter what happens in the preceding hour.

There was one last thought that lingered with me as the credits rolled (there are two post-credit sequences if you’re interested in that sort of thing).  There is an increasing logistical challenge that Marvel will face as the MCU films and TV shows carry on.  The curse of the super hero comic book format is that they tend to become too convoluted and complex for the average punter to follow as they get increasingly bogged down in maintaining the lore of a hundred different stories.  There are events in Winter Soldier which presumably will have ramifications on what happens in the next Avengers film and possibly even the other Marvel super hero films.  So what happens if you watch The Avengers 2 and haven’t seen Winter Soldier?  If you’re like me, how much did you miss because you don’t watch the Agents of S.H.I.E.L.D TV show?  The initial novelty and attraction that Marvel generated by having a unified cinematic universe may well become a liability.  Who can keep up with it all?

Costs you a Buck

Summary : A solid entry in the MCU that has a much more ambitious and interesting first half that is let down by a rather plodding and formulaic ending.