In which things begin to settle

It’s round four of the A-League and after the dust settled this weekend, we finally started getting some semblance of balance to the competition.  Melbourne Victory, Gold Coast United and Central Coast Mariners all secured their first wins of the season and Perth Glory finally lost their first game.  The new players are starting to gel with their teams and we are beginning to get an idea of what the season ahead may hold. Sydney are starting to look pretty good while Melbourne Heart fans are probably in for a long seaosn.  Only a few constants remain – Wellington Phoenix still keep getting a player sent off or injured every game, Harry Kewell continues to underwhelm, Andy Slory is still the worst import player in the competition and…

The Brisbane Roar Keep Marching On

This week, the Roar hosted Adelaide United at Suncorp Stadium. Confidence was sky high after beating local rivals Gold Coast United 3-0 last week and extending their unbeaten streak to 31 games.  Having more or less beaten all domestic records, the next set of milestones that Aussie sports journos could dig up are unbeaten streaks in other leagues around the world – Arsenal (49 games, 2003/04) and AC Milan (58 games, 1991/92).  It’ll be months before they could even get close to either record though and its doubtful they’ll even come close.  Regardless, the existing streak is a remarkable accomplishment.  In a competition with a salary cap ($2.4 million for the entire squad), it simply shouldn’t be possible for one side to dominate in the way that Brisbane have.  Even more incredible is that they have done it without using a marquee player (i.e someone exempt from the cap).

This week they played Adelaide who have been in patchy form at the start of the season.  They looked terrific when they beat Melbourne at home but have looked succeptible at the back in their other games.  However, they have an excellent away record against the Roar having only lost once in nine outings.

Adelaide United showed their intent early on in the game with some classy through-balls that looked to beat the Roar’s high line defence.  It worked.  Less than five minutes had elasped and Brisbane Roar conceded their first goal of the season when Dario Vidosic curled in a goal from outside the penalty area.  Having kept their opponents scoreless in the first three games of the season, it would be interesting to see how the Roar would respond to going a goal down.

In the twentieth minute, Brazilian playmaker Henrique was brought down for a penalty which he converted himself to equalize.

Two minutes later, Besart Berisha latched onto a cross from Broich to give the Roar the lead.

Three minutes later, Berisha got his second after a beautiful assist from Mitch Nichols put him through.

Two minutes later, Berisha scored the fastest hattrick in the history of the A-League (5 minutes).

Six minutes after that, Henrique was brought down by Casio in the penalty area and converted his second penalty.

In a fiften minute blitz, the Roar put five goals past a hapless Adelaide side that was getting obliterated down their right channel.  Rini Coolen saw the writing on the wall and substituted Andy Slory in the 40th minute.  There was no injury, just an admission that a player on his side was hopelessly out of his depth.

The second half saw Berisha get his fourth goal.  Nakajima-Farran came on as a second half substitute and scored his first goal for the club.  In short, the Roar absolutely humbled Adelaide.  They had 65% possession and were unlucky not to get another couple of goals.  Mitch Nichols struck the post and Kofi Danning had a near-miss.  Adelaide weren’t necessarily playing that badly but the Roar are on another level with their confidence and teamwork at the moment.  It’s early days yet but it looks like the rest of the league has a lot of work to do to stop Brisbane’s march towards back-to-back titles.

The only dampener on the evening was the miserable turnout for the Roar.  A measely 11,000 fans were there to see them play on Friday night – roughly a fifth of the stadium’s capacity.  Despite the Roar’s excellent form and bundle of goals that they’ve been scoring, it hasn’t translated into big crowds.  It remains a challenge for the club to find a way to attract new supporters to the game.  Tickets cost $20 bucks, the quality of the football is good and the results are going their way.  It seems there is another ingredient required to attract Queenslanders to the beautiful game.

Next week:  a visit to Etihad stadium to play against Melbourne Victory and Harry Kewell. 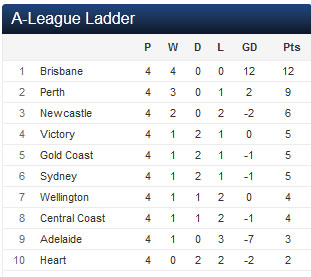