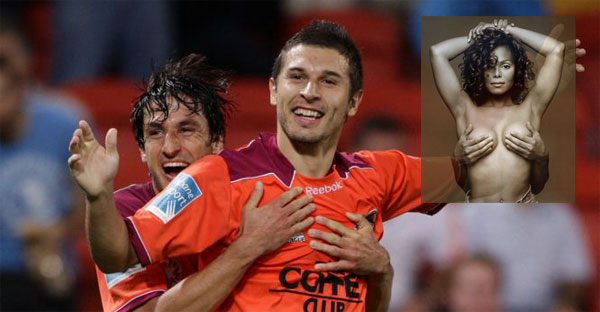 It was a top of the table clash on Saturday night between the Roar and the former league leaders Adelaide United.  This match of the round would pit the two most entertaining sides in the league against each other and promised to deliver fast, free flowing football.  Due to the A-League’s bizarre fixture arrangement, this would also be the Roar’s third game in seven days.  They would be desperate to hold onto top spot in the league but this would mean they would have to break a Suncorp Stadium hoodoo:  they’ve never beaten Adelaide United at home in the history of the competition.

Earlier in the year, I watched the 2010 Super 14 season where wooden spooners Queensland Reds suddenly found their form and were in contention for a Final Four finish.  Over the course of the season, the attendance skyrocketed as bandwagon hoppers climbed aboard the Reds express and by the final game of the season, there had been a near 300% increase in attendance.

Once again, a similar effect is starting to occur with the Roar (thank God).  After playing the first third of the season to a paltry crowd of 7,000 on average, over double that figure turned up to see the Roar on Saturday night.  Clearly the Suncorp staff were caught off guard and the kick off had to be delayed by 15 minutes to get all the punters into the stadium.

It was great to see Queenslanders get behind their football team.  The stadium actually had some real atmosphere for a change.  Knowing that they had the opportunity to win over some new fans, the pressure was on for the Roar to not only play some entertaining football but to send the fans home happy with a win.

After a balanced opening half hour that saw both sides trading shots at goal, an opportunity fell to Reinaldo just inside the box.  In one smooth motion, he turned and effortlessly slotted the ball home past goalkeeper Eugene Galekovic.  I was delighted that we scored first but felt the game was by no means safe.  We’ve never beaten the Reds at home.  Something would go wrong!  I know I’m hard on that lazy ass Reinaldo but here he is scoring another goal.  Maybe I’m too hard on him.  As these thoughts go through my mind, Reinaldo gets carded for taking off his shirt during a goal scoring celebration that involves dry-humping the Fox Sports camera near the corner flag.  Dammit, Reinaldo. 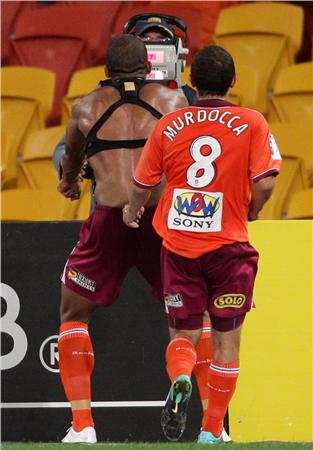 A delighted Reinaldo celebrates by getting intimate with the sideline camera

The score remained unchanged in the first half but things looked promising.  Broich was causing all sorts of problems for the Adelaide defenders and he was running his marker Cornflakes ragged.  Actually, I think his name might be Cornwallace or something.  Who cares, he was rubbish.  Broich had served up about three offloads on the edge of the area for skipper Matt McKay but unfortunately he couldn’t convert any of the chances.

The decisive moment in the game came ten minutes into the second half when Reinaldo was brought down from a dodgy tackle by a United midfielder.  The ref duly awarded the free kick to the Roar.  For absolutely no good reason, Reinaldo decided to get in the ref’s face and mouth off even though the decision had already gone his way.  The ref reacted by pulling out a second yellow and sent him off.  God dammit Reinaldo! I was pissed.  This would be where we lose the momentum and United would find a way back into the game.  I saw McKay having a quick exchange with manager Ange Postecoglou on the sideline.  Clearly, with the red card, there would need to a change in strategy.

Words can’t adequately described the feelings I have about what happened in the next ten minutes.  Instead of sitting back, the Roar poured on the attack.  A quickfire cross in the box a mere two minutes after Reinaldo’s send off found defender Matt Smith who slammed the ball into the roof of the net.  Five minutes later, Kosta Barbarouses charged into the penalty area with an incisive run and slotted the ball home for a third.  Then finally when Adelaide managed to mount an attack of their own, the Roar stripped them of possession and on the counter attack, Barbarouses fired an absolute cracker from outside the box to make it four.

Playing with ten men for most of the second half, the Roar simply obliterated Adelaide.  After the game, the pundits were full of praise.  Is this the best side we’ve seen since the inception of the A-League?  What else can you say in a week of football where the Roar ended Wellington Phoenix’s two year undefeated streak at home by putting four goals past them and then doing it all again three days later at home against their biggest challengers in the league?

Surely this will be our season. 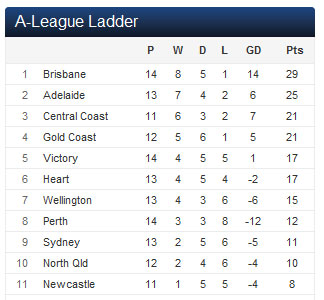 Previous: A Season With Verona
Next: Jackass 3D