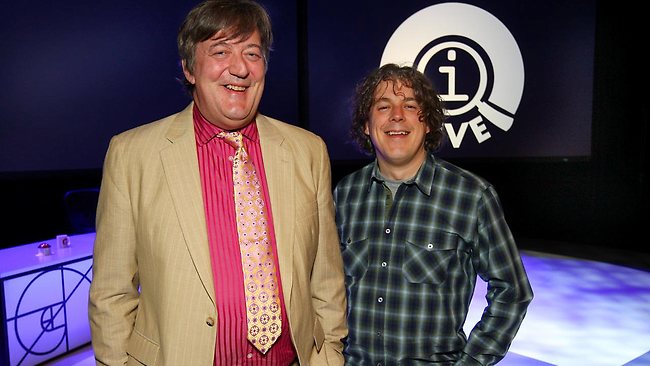 I love the show QI.  The series began nearly a decade ago when producer John Lloyd initially had the idea of doing a quiz show with questions so difficult that no one can answer them.  The BBC loved the pilot episode and it has since spawned a terrific little show that is now in its nineth season and is still going strong.  The ongoing appeal of the show comes from its combination of witty banter amongst the panellists and the genuinely weird minutae that they discuss.

This month, Stephen Fry and Alan Davies took the show on the road and performed QI Live in Perth, Melbourne, Sydney and Brisbane.  I got to check out the show on Tuesday and was very happy with what I got.  Stephen Fry came out first and spoke to the audience for about an hour discussing his past travels to Australia nearly thirty years ago and some of history behind the show’s origins.  He then discussed some typically QI obscure factoids before introducing the panel and starting the show proper.  For our local panelists we got Kiwi comedian Cal Wilson, film star Shane Jacobson and radio presenter Adam Spencer.

It was exactly what I wanted and expected.  The stage was designed to look exactly like the set from the show with the same novelty buzzer sounds and klaxon alarm for incorrect answers.  Being off-air, the panelists felt free to run a little loose with their language so it was a little bit like watching an uncut edition of the show.  Happily, I felt the Australian panelists managed to keep up with Fry and Davies and there was some particular impressive exchanges of dirty lymerricks during one segment of the show.  Also, I appreciated that the QI Elves came up with some Australian themed trivia questions.  I ending up learning quite a bit about the famous Australian racehorse Pharlap that night.

All in all a great night and if you should be so lucky to have the QI Live show roll up into your town, I highly recommend checking them out.

Previous: A-League 2011/12 Season – Round Four – Seventh Heaven
Next: Youtube Friday: Before They Were Famous